In today;s Media Briefs: AFR + FT still misses PMI ... Rundle: the pollies bludging on Twitter ... Front Page of the Day ... The Department of Corrections ... Ratings up for US Olympics broadcaster NBC ...

Sales, customer service in Fairfax cuts. Fairfax’s radical centralisation drive is beginning to bite in the company’s commercial departments, with sales staff departing en masse and some customer service operations about to be outsourced.

Crikey understands that around 20 advertising staffers have resigned in the past week alone, with large numbers of digital staffers also departing. The exodus comes in the wake of last week’s announcement that food and wine commercial director Simon Bates was jumping ship to MTV. More departures from Fairfax’s metro sales teams are expected over coming weeks through redundancies. Some of those forced to leave may be able to pick up roles with in Rural Press’ digital division which is taking on staff.

Crikey can also reveal that Fairfax will put some of its inbound and outbound customer service operations out to tender later this month. The company is still deciding which teams’ tasks will be outsourced, but it’s clear call centre staff will lose their jobs. Sixty per cent of Fairfax’s 1900 job cuts are expected to come from outside the company’s editorial and printing press employees.

Speculation is swirling about the future of Robert Whitehead, Fairfax’s long-serving director of marketing and newspaper sales. Whitehead, who served as editor of The Sydney Morning Herald from 2000-2005, declined to comment, but Fairfax insiders insist he is being moved to another role. One source said he is being found a “seat warming job”; another said he was in the “holding bay”. Whitehead was heavily involved in the development of the SMH‘s popular iPad app. — Matthew Knott

New journalism venture at Melbourne Uni. Margaret Simons’ new journalism venture The Citizen will launch early next year at Melbourne University and Simons has been busy interviewing seven high-profile editors, one of which will secure an impressive six-figure salary. “It’s a stunning short list and it will be a very difficult decision,” Simons told Crikey this morning.

The primarily online publication will feature the work of staffers inside Simons’ Centre for Advanced Journalism with the possibility of hard-copy editions for special splashes. Ads for the editor gig and editorial assistant have run in recent weeks in Crikey and The Australian and The Citizen will aspire in the long-term to hire more journalists. Until then, contributions will be drawn from the centre’s staff and students studying the sandstone institution’s new master of journalism.

A research arm, Citizen’s Agenda, will run in league with the journalism-focused Citizen. Watch this space as they say. — Andrew Crook

AFR + FT still misses PMI. The Australian Financial Review trumpeted its deal with the Financial Times, which started today, and promptly missed the big story that has remained on the front page of the FT‘s Asian edition’s website overnight Wednesday/Thursday (and for more than 18 hours). “Global slowdown bites across Asia” was a report on the monthly surveys of manufacturing activity conducted by Markit.

In fact, The AFR should have written its own story, just based on the headline on the Markit release, which consolidated the results of the PMI surveys for countries from Japan to China, Vietnam, Indonesia and India. “Manufacturing downturn deepens as exports suffer largest fall for over three years,” the headline told readers of the release. And the dot points underneath explained: “Asian Manufacturing PMI falls to second-lowest since April 2009, Broad-based weakness evident across region, Exports fall at the fastest rate for over three years, Employment and prices also fall.”

The region isn’t in recession, as Europe is (the PMI for the eurozone worsened sharply last month to a 37-month low), nor is it sliding as sluggish as the US, but from a low base. The PMI for the US was negative for a second month. The surveys for Europe and the US were out by 10.30 last night, Sydney time. Certainly the European surveys were available earlier in the evening, but the important ones for us were in Asia.

Seeing the area covered by the Markit survey in Asia is our biggest export market (containing China, Japan, India, South Korea and Taiwan, which buy the overwhelming majority of our iron ore, coal, LNG and metals exports), you would have thought The AFR — as the country’s premier business journal — would have spotted the story and ran with it on page one, especially after its new partner, the FT, was leading with it. — Glenn Dyer (read the full story here)

Rundle: the pollies bludging on Twitter. Music industry coke pig turned chickshite novelist turned Tory MP Louise Mensch (nee Bagshawe) has kicked a minor Twitterspat into play by demanding that Labour repudiate a flock of Labour activists who were talking on Twitter about party planning for the day of Margaret Thatcher’s death.

The Thatcher deathwatch is a grand old tradition in the UK — when she does kick the bucket, pubs across the north, London, Scotland, Wales — well, look, everywhere but the Cotswolds — will overflow with balloons, streamers and all-day drinking. The Jubilee will have nothing on it. It’s a trifle pathetic that people cheer themselves up with this thought — Maggie is now, as they say, put beyond use — but it has become as traditional as swan-upping.

Mensch thus scored a point from undisciplined activists, but what was more interesting was her twitactivity. Mensch’s verbal style is pretty distinctive, her tweets follow it, so it seems likely she’s running the account herself. Which raises the question: 40 tweets over two hours? This woman is an MP, on several committees. Doesn’t she have any bloody work to do?

Which raises another question: is it possible to judge the productivity of MPs, both in the UK and Australia, by their twitteriness? Would it be possible to see who our laziest, most easily distracted MPs are? Mensch told the Daily Mail that using “class A” (that is, very good) drugs during her music industry days damaged her mentally, soon after which she began pursuing a career in right-wing politics. What excuses do others have? — Guy Rundle

Front page of the day. Indian newspaper The Asian Age covers the massive power loss in that country over the past few days: 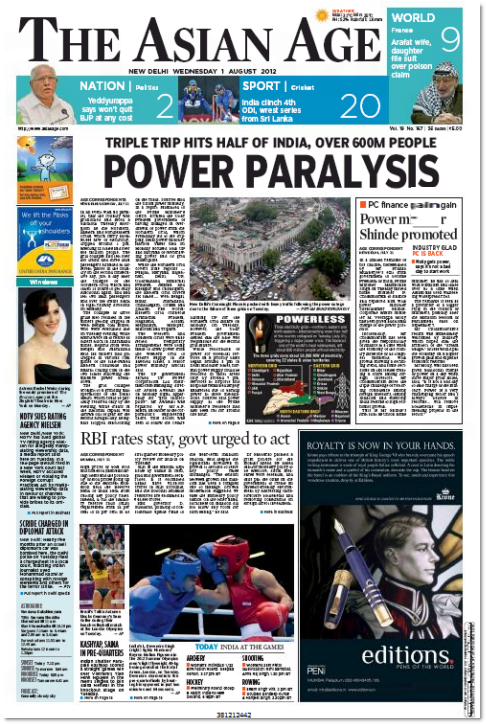 The Department of Corrections. And, while in India, this Olympic-themed correction comes courtesy of The Hindu newspaper: 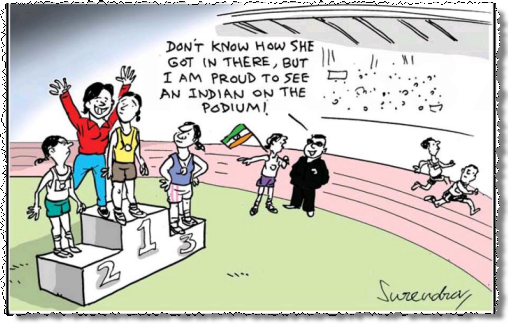 Ratings up for US Olympics broadcaster NBC

“Despite a storm of criticism over the way it has handled the broadcasting of the Olympic Games, NBC has predicted that it will break even once the sporting extravaganza has ended.” — The Guardian

Paywalls on the increase in the US

“Analysis of Newspaper Association of America data by EByline shows news sites have picked up the pace of paywall adoption in recent months. ” — 10,000 Words

We watch 4 billions hours of YouTube videos a month

“YouTube users now watch more than four billion hours of video through the site each month. For those of you keeping score at home, that’s 456,000 years of cat videos, sports highlights, TED Talks and other content per month. ” — Mashable

i am suprised that crikey has not made much comment about the fact that murdoch is taking over packers media interests, which will give him control of foxtel

what a disgrace, whats going on in this country when one man effectively has control of most of our papers, his son controls a tv station and now he has a monopoly on our pay tv system