An economy on the up

The steady growth of the Australian economy continues.

An economy on the up. The steady growth of the Australian economy continues. Australian Bureau of Statistics retail trade figures for June out this morning show retail turnover rose 1.0% in June 2012, seasonally adjusted, following a rise of 0.8% in May 2012. 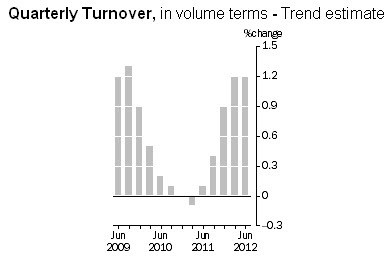 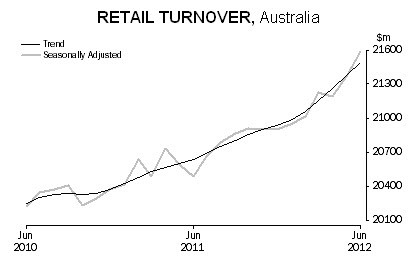 The ABS reported that a majority of industries contributed to the rise with food retailing (0.9%) and department stores (3.4%) the main drivers of growth. Turnover also rose in other retailing (1.4%), cafes, restaurants and takeaway food services (1.0%) and clothing, footwear and personal accessory retailing (1.8%). The only industry to fall was household goods retailing (-0.2%). Over the longer term, Food retailing is still the largest contributor to growth (up 0.5% in trend terms) followed by cafes, restaurants and takeaway food services (up 1.1% in trend terms).

These strong sales figures suggest that things are still on course for the government to meet its budget growth forecast. They also reduce the chance of another official interest rate fall next week.

Who is winning in Syria? The nightly news bulletins keep showing us graphic footage of death and destruction in Syria but give us very few clues as to the likely outcome. In such circumstances I revert to looking at the market for a clue and find that the chances of Bashar al-Assad no longer being president by the end of the year are hovering just above the 60% mark.

Voting with their Euros. The politicians keep talking and the European financial crisis keeps bubbling along. The latest cause for alarm is news from the Spanish central bank that in the first five months of 2012, a total of €163 billion left the country. During the same period a year earlier, Spain recorded a net inflow of €14.6 billion.

Essential research. Scientific discovery takes many forms and this variation of cutting off your nose to spite your face caught my fancy. Scientists at the Smithsonian and their colleagues have discovered a new mechanism of animal mating plug production.

In the giant wood spider Nephila pilipes, a highly s-xually dimorphic and polygamous species, many small males compete with one other for access to a few huge females. During copulation these males are known to sever their own genitals in an attempt to plug the female, thereby gaining paternity advantage by preventing other males from mating with her.

The researchers staged laboratory mating trials with varying degrees of females mating with multiple males. They observed that no plugs were ever formed during mating trials, but instead, females exposed to many males produced the amorphous plugs during the egg-laying process.

These plugs, when hardened, prevented subsequent copulation. The authors conclude that the newly discovered “self-plugging” mechanism represents a female adaptation to sexual conflict through the prevention of unwanted and excessive copulations.

How civilised, we can bet on a war now and get 6:4 on that Bashar won’t be around at the end of the year?
What odds on “pick the toll”?