The ongoing political intrigue surrounding the s-xual harassment case against parliamentary speaker Peter Slipper has generated immense media coverage — the focus of which this week moved to Slipper’s accuser and former staffer, James Ashby, over allegations he had s-xual relationships with 15-year-old boys.

Much coverage of the Slipper scandal thus far has centred less on the actual allegations and more on how they came to light, prompting one to wonder if we can expect a sting in the tail surrounding the Ashby revelations. Ashby’s original bombshell back in April was linked to Slipper opponent Mal Brough who himself rocketed into our charts this week, winning preselection as the LNP candidate for Slipper’s seat of Fisher.

But back to policy, where the National Disability Insurance Scheme was the number one topic at the COAG meeting last week. That saw Disability Reform Minister Jenny Macklin power into the news, and the failure to gain agreement from all states to part-fund the scheme boost the media presence of Premiers Newman, O’Farrell and Baillieu. 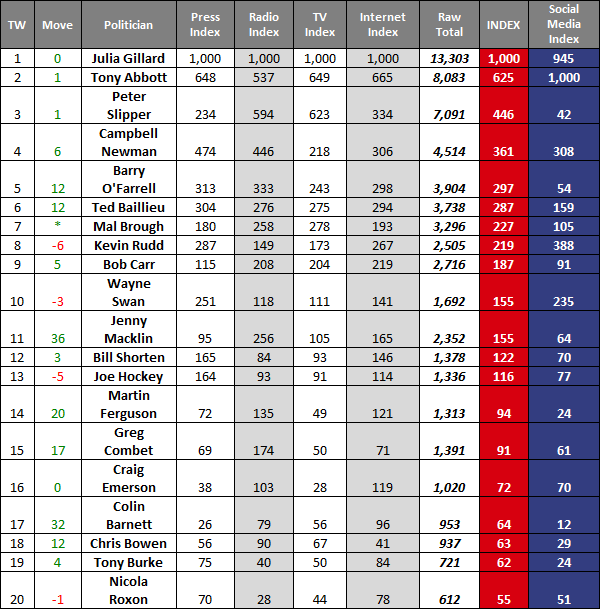 Treasurer Swan was tweeted and retweeted over his attack on Queensland Premier Campbell Newman, having labelled him “cold-hearted and callous” for refusing to fund a trial of the National Disability Insurance Scheme. Meanwhile K-Rudd remains ever present.

Leisel Jones silenced her critics by coming fifth in the 100-metre Olympic breaststroke final after coming under media fire for looking “unfit” for the Games.