From the Crikey grapevine, the latest tips and rumours … Sharing heads of state. Tony Abbott has returned from what by all accounts was a successful overseas trip. For a bloke whose foreign policy ideas were pretty much confined to talking about how much he liked English-speaking countries in his book Battlelines, Abbott has come quite some […]

Sharing heads of state. Tony Abbott has returned from what by all accounts was a successful overseas trip. For a bloke whose foreign policy ideas were pretty much confined to talking about how much he liked English-speaking countries in his book Battlelines, Abbott has come quite some distance since he became leader. But an evidently well-travelled source advises us that Abbott’s peculiar take on the issue of heads of state may have left some Americans scratching their heads.

“Witnesses will attest that Abbott demonstrated his ‘diplomatic’ skills, when he noted that he viewed the US President as his president, just as he knows his Queen is their Queen. Check with other attendees if you want, but its true.”

Crikey had not heard back from Abbott’s office by deadline but we have independently confirmed the statement. How many citizens of the republic founded in throwing off the tyranny of George III think the Queen of England is “their Queen” is an interesting matter for debate, but that’s less an issue than that the alternative Prime Minister regards the US President as “his President”.

Qld minister wants to hear it, not read it. As the axe continues to swing over the Queensland public service, we’ve been told of an internal email within the Department of Communities, Child Safety and Disability Services that marks an interesting development in the relationship between ministers and advisers. Our George Street spy reports:

“Apparently the minister and director-general no longer wish to receive briefing notes for information — a mechanism staff have used in the past to keep senior executives across key aspects of service delivery and program issues. Any important issues will be brought to the attention of the deputy D-G who will verbally brief the D-G and minister.

“The key thing to note in all this is the direction to stop written briefings in favour of verbal ones — apparently its easier to deny you know something when you don’t get it in writing. It is a troubling thought that senior executives care so little about the services they provide, they so blatantly tell you they don’t want to know how they are performing.”

Accidentally in breach of copyright? Still in the Sunshine State, did Campbell Newman steal his campaign song from the Counting Crows? Blogger The Pedantic Nerd points out the fairly remarkable similarities in the Crows’ Accidentally In Love and Newman’s campaign jingle from his electioneering earlier this year. Judge for yourselves: 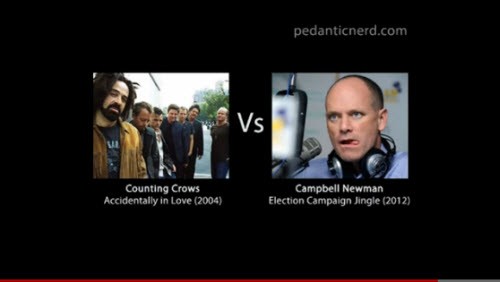 Posties left out in the could by Fahour. Yesterday Crikey revealed that Australia Post’s expensive sponsorship arrangement with the Australian Olympic Committee could turn sour if Aussie athletes fail to pick enough gold medals to offset the expense through souvenir stamp sales. But CEO Ahmed Fahour’s cash splash is also rankling with the government-owned postie’s rank and file staff. Thousands of posties have joined an online change.org campaign to force Fahour to provide them with proper wet weather gear as winter bites.

“I love my job and being outdoors — but for the last three winters, it’s been miserable,” says Anthony, a 27-year veteran of the daily grind. “Three years ago, Australia Post decided to cut costs and stop providing us with Gore-Tex wet weather gear — the only thing that keeps us dry when we’re out delivering letters and parcels in the pouring rain. The jackets we have now leave us soaked to the skin in 30 minutes, and our boots and gloves aren’t any better. We come home at the end of every day cold, wet and miserable.”

60 cents in the dollar? One tipster suggest the real reason for the expense of Microsoft software for Australian buyers is the company’s internal pricing policies:

“Here’s the reason Microsoft software is so much more expensive. Microsoft have an internal excahnge rate of AUD$0.60 to the USD. That was set many many years ago, and has not changed once since the Australian dollar started to climb against the greenback. Why? Because then all the Australian managers would have their quota increased by the same amount in order to maintain their revenue and profit contributions.”

Microsoft Australia declined to respond. “Microsoft does not comment on market rumor or speculation. We have contributed a submission to the current IT inquiry and have been represented by the AIIA at the hearing,” a spokesman told us.

Ties with Fiji: too long to renew? Professor Damien Kingsbury reported for Crikey yesterday on the Australian government’s decision to re-establish diplomatic ties with Fiji, asking if Foreign Minister Bob Carr had moved too soon. According to one connected correspondent on the ground he in fact waited too long:

“Current policy has done nothing to change internal politics but has strengthened the ability of China in particular to strengthen its influence. The reality is that DFAT has done nothing to understand the situation first hand and have relied on remote information or advisers. The failings Of DFAT in dealing with small nations versus large is pretty clear. In the long term these small countries don’t make good headlines but will provide a strategic platform in the South Pacific.”

Dear Leslie, I really don’t want to meet my sperm donor. Am I being silly?

No, no, no and no, Tony. Their President is our Sheriff.

Those “Howard Fire Walls” have spread to Queensland?

I still believe Newman is good for federal Labor in Queensland.

Accidentally in breach of copyright?
Interesting observation…
I am not a judge to rule if in fact there was an actual breach of copyright or plagiarism, by not attributing to the original source.
On the other hand, who’s to know if the creator obtained a creative license? Or not.
Or would the proportion used be within the framework of fair dealing?