In today's Media Briefs: Front Page of the Day ... Rupert's The Daily lays off nearly a third of staff ... Report finds quality of Oz journalism dwindling ...

Front page of the day. Another day, another round of hilarious Olympic themed front pages courtesy of the UK tabloids. But we are going to resist turning to Fleet Street again today and instead will switch our gaze to the Baltic nation of Lithuania.

Lithuania, as Crikey readers may be aware, won its first ever swimming gold medal on Monday thanks to the extraordinary efforts of 15-year-old Ruta Meilutyte who won the 100-metre breaststroke final, beating heavily fancied US champion Rebecca Soni. That’s what the best of the Olympics are all about — contributions, victorious or not, that put a smile on the collective face of sports lovers. Anyway, all of Lithuania was smiling yesterday and so read the front page of Lietuvos Rytas with its headline: “Swimming princess — gold!” 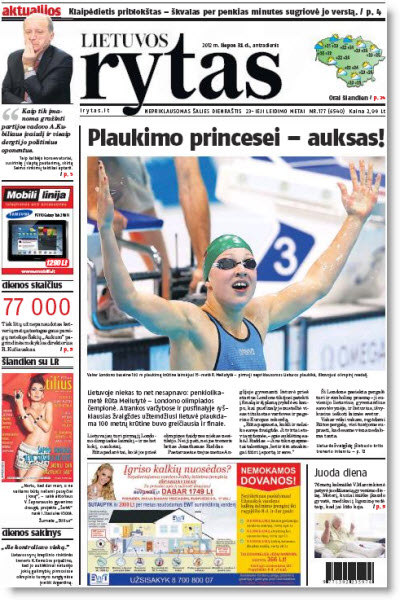 Rupert’s The Daily lays off nearly a third of staff

“The Daily, Rupert Murdoch’s tablet newspaper, has laid off close to a third of its staff just 18 months after its glitzy launch.” — The Guardian

“At one of the most turbulent times in the history of the newspaper industry, the Media Alliance has released a report that finds publishers struggling to maintain editorial quality as resources and staff dwindle.” — mUmBRELLA

“Twitter on Tuesday restored the account of a British journalist whose suspension following his criticism of US broadcaster NBC’s Olympics coverage had sparked an outcry.” — NineMSN

“Public or private subsidies may be required to sustain quality journalism and to address an emerging information gap in the digital era, according to federal Labor backbencher Andrew Leigh.” — The Sydney Morning Herald

I hope the Media Alliance didn’t pay for that report?