Food fight: The Age dishes up a win to The Oz. And so, it made it. Age foodie insert Epicure ran a full-page colour ad plugging bitter rival The Australian’s esteemed Hot 50 awards. Today’s glorious page three celebration of St Kilda stalwart Cafe Di Stasio’s triumph in The Oz’s Classic restaurant section made it to print, despite the initial reservations of senior Age executives. Australian food critic John Lethlean has been tweeting his heart out about the guerilla attack, gloating about his old section promoting his new home. Here’s Di Stasio maitre d’ Mallory Wall (and The Australian’s logo) in all her Fairfax glory … 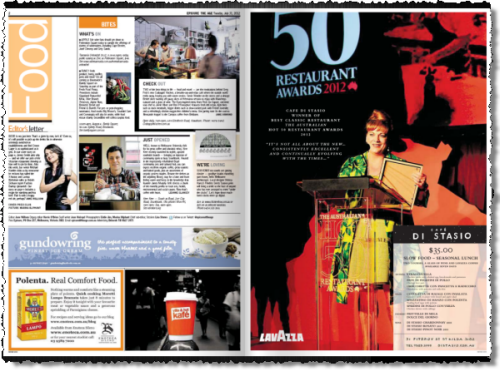 To many Media House insiders, it seems surprising The Age would allow a prominent ad to promote a rival paper, but owner Ronnie Di Stasio is a valued advertiser of 25 years standing who is obviously held in high regard as the rivers of gold slow to a trickle.The Age’s sages clearly recognised the importance of the award to its major advertiser and had the largesse to run it.

No word yet on the future of Epicure itself, after Age management responded to industry fears of a looming Sydney-centric consolidation by shoehorning this story into The Sunday Age. The rumours sparked a savage and continuing response on Twitter under the hashtag #SaveEpicure and a special edition of 3RRR show Eat It. Buon appetito. — Andrew Crook

All three were appointments of former editor Monica Attard, who quit in May after a falling out with publisher Jane Nicholls. Only four members of the committee remain — UNICEF chief Norman Gillespie, doctor John Carmody, ProPublica editor Paul Steiger and ex-ACCC head Graeme Samuel. Meanwhile, TGM has been slow to showcase new editor Lauren Martin to its readers — there’s no mention of her on the site at all, despite her official ascension being spruiked in an all-staff email way back in June. — Andrew Crook

Front page of the day. Expect a few UK tabloids filling this space over the next few weeks. Today’s Sun front page is a beauty, blending that wonderful combination of British wit and sporting prowess: 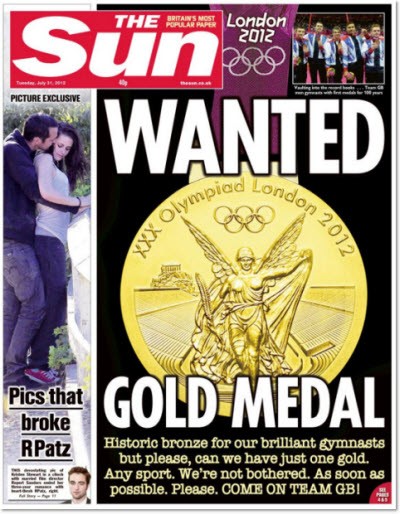 “Twitter has brought down a hail of critical tweeting on its own head by suspending the account of a British newspaper’s Los Angeles correspondent following his acerbic reporting of NBC’s coverage of the Olympics.” — The Guardian

“Jonah Lehrer, the 31-year-old author, speaker and staff writer for The New Yorker, executed one of the most bewildering recent journalistic frauds, one that on Monday cost him his prestigious post at the magazine and his status as one of the most promising, visible and well-paid writers in the business.” — The New York Times

“Former Herald Sun editor Simon Pristel has joined the Seven Network as its director of news in Melbourne.” — The Australian

The journalist’s role in a tragedy

“When should one’s professional duty to witness, document and lay bare be superseded by one’s human compulsion to act?” — Editors Weblog