And so, it made it. Age foodie insert Epicure ran a full-page colour ad plugging bitter rival The Australian‘s esteemed Hot 50 awards.

Today’s glorious page 3 celebration of St Kilda stalwart Cafe Di Stasio’s triumph in The Oz’s Classic restaurant section made it to print, despite the initial reservations of senior Age executives.

Australian food critic John Lethlean has been tweeting his heart out about the guerrilla attack, gloating about his old section promoting his new home. Here’s Di Stasio maitre d’ Mallory Wall (and The Australian‘s logo) in all her Fairfax glory. 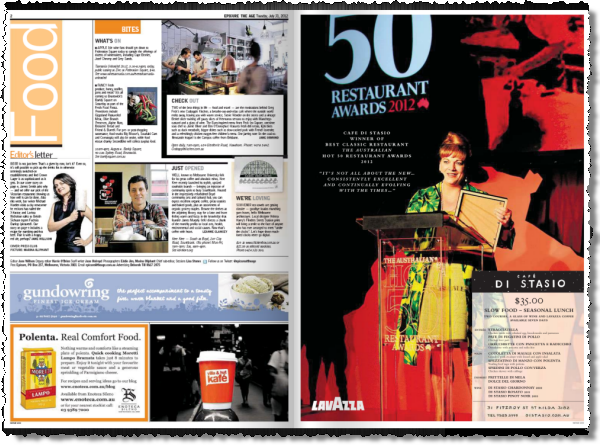 To many Media House insiders, it seems surprising The Age would allow a prominent ad to promote a rival paper, but owner Ronnie Di Stasio is a valued advertiser of 25 years standing who is obviously held in high regard as the rivers of gold slow to a trickle. The Age‘s sages clearly recognised the importance of the award to its major advertiser and had the largesse to run it.

No word yet on the future of Epicure itself, after Age management responded to industry fears of a looming Sydney-centric consolidation by shoehorning this story into The Sunday Age. The rumours sparked a savage and continuing response on Twitter under the hashtag #SaveEpicure and a special edition of 3RRR show Eat It.

“Tweeting his heart out”. One. “Gloating.” At a stretch. “New home.” Only 3.5 years. Jeez Andrew, reckon you could beat that up any more?

But it’s all just so exciting John!