From the Crikey grapevine, the latest tips and rumours … Carbon Watch. Coalition frontbencher Andrew Robb appears to have been caught out exaggerating the impact of the carbon tax on rubbish. A Crikey reader passed on this glossy pamphlet distributed to constituents by Robb, which warns that the Bayside City Council’s “waste management charges will increase 17 per cent […]

Carbon Watch. Coalition frontbencher Andrew Robb appears to have been caught out exaggerating the impact of the carbon tax on rubbish. A Crikey reader passed on this glossy pamphlet distributed to constituents by Robb, which warns that the Bayside City Council’s “waste management charges will increase 17 per cent to cover the flow-through costs of the carbon tax on waste”. 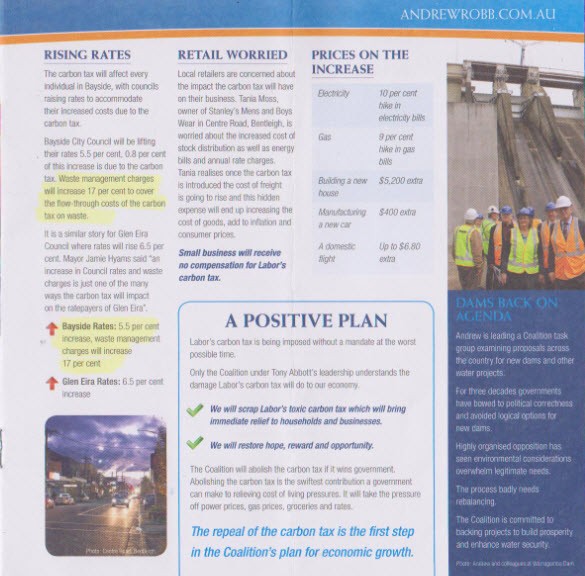 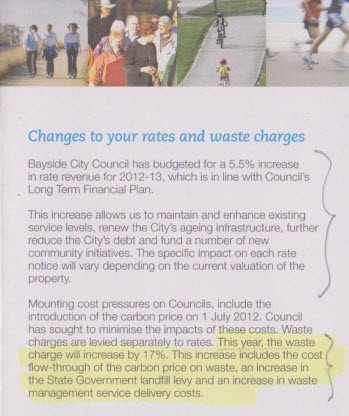 Come across a price rise attributed to the carbon tax that seems a little fishy? Let us know.

Rinehart’s Singapore fling. The owners of The Straits Times might have to watch out — there are reports that media acquisition-er Gina Rinehart is buying property in Singapore. According to Singapore’s Business Times, which comes to us via the Property Observer website, Rinehart has reportedly secured two luxury Singapore apartments in a “beachfront” complex due for completion this year.

The Business Times reported that an entity linked to Hancock Prospecting was said to be paying $S23.3 million for a third-floor unit, and $S33.9 million for a fourth-floor unit.

According to Property Observer, Rinehart is quite the fan of Singapore, praising the city state for its openness to investment, minimisation of red tape, acceptance of guest labour, and low taxes, crime rate and debt. So she may refrain from jumping on the back of a truck in her pearls to protest against government policy, as she visits her south-east Asian pied-a-terre.

Moving on. We hear that a senior figure at the federal Department of Immigration may soon be moving on as the Prime Minister seeks to contain the fallout from the vexed asylum-seeker issue. We’ll keep you posted.

The Rudds are not the only family to fall on different sides of the political fence. With the help of Crikey readers, we’ve updated our Political Family Feud list. Please keep the tips coming.

Meanwhile, Tony Abbott opposes gay marriage while his lesbian sister Christine Forster supports it; however, as the two have a strong relationship and Foster has sought a political career with the Liberal Party, so that’s not a family feud in the league of the Rudds.

I’m told by those who really would know that the inclusion of the Costello
brothers in family feuds is rubbish which has been pointed out before in
response to Crikey’s lipsmacking gossip. It is obvious that they express
different opinions, at least different emphases, on some political policies,
though I don’t recall the former Treasurer ever being one of the heavy
spokesmen for the policy on asylum seekers, but my information is that
they are pretty close.

I was also a student of Bob Howard. I understand he was actually a member of the Labor Party, not simply a supporter.