In today's Media Briefs: Ormonde leaves Age ... ports going for a song ... cat lays down full-spectrum blueprint ... The Department of Corrections ... The New York Times posts loss ... The media gigs of a MasterChef winner and more ...

Late night re-writing legend Tom Ormonde leaves The Age. Tom Ormonde, one of the most respected figures inside The Age for the last two decades, has left the newspaper. In an email to colleagues last night, the news editor said he was leaving the paper at “unexpectedly short notice” and will head to Thredbo next week for a working holiday. He has served in nearly every position at the paper and could fill content on nearly every page in quick time. A number of other senior Age figures are also believed to be vigorously queuing up for a generous exit package, including those that have been rejected in previous rounds.

With a few regrets, and at unexpectedly short notice, I am leaving The Age. Our leaders have kindly acceded to my request for an early and affirmative answer on my redundancy application to enable me to take off next week for a long-planned two-month working holiday at Thredbo.

Tonight (Thursday) is my last shift. As some of you heard me say earlier, I think The Age will continue to be a great place to work, no matter how tumultuous the times. I will miss my job and being part of something as great as The Age. And I will miss you, my dear colleagues — well, most of you anyway.

For those I didn’t see tonight, I am planning to have a proper farewell after my return from Thredbo in late September or early October. The theme will be familiar to some of you — back to Tom’s.

Cat lays down blueprint. Metro Publishing CEO Antony Catalano has laid down an ambitious blueprint for full-spectrum control of the city’s local media market. In a presentation to staff this week before he jetted off on his delayed honeymoon with wife Stefanie to Palm Springs, Catalano revealed the appointment a crack team of executives led by general manager Trent Casson and the birth of a new glossy publication.

Casson will oversee editorial, sales and marketing, former Fairfax Community Network GM Colin Moss becomes operations manager and Johnny Ioannou snaffled a gig as real estate sales czar. In a substantial promotion, Eileen (not Aileen) Berry will ascend to group editorial director of MMP alongside her current gig as editor of The Weekly Review. An accompanying presentation, obtained by Crikey, spruiks the merged company the former Sun cadet half-sold earlier this year to Fairfax for $35 million in cash and $35 million in assets, valuing the company at $140 million.

Catalano revealed that a new title, The Weekly Review South East, will launch in six weeks, covering the Glen Eira area in addition to four new publications focusing on local news in the enclaves of Stonnington, Boroondara, Port Phillip and Bayside. The merged entity, which was bedded down on Wednesday, boasts an expanded 35 mastheads. — Andrew Crook

Ports going for a song. The sale of port assets in NSW seems unlikely to do much for the bottom line, according to The Sydney Morning Herald …

Front page(s) of the day. With the London Olympics beginning it would be remiss of us to just pick one UK newspaper when you can feast on the collective celebration emitting from the front pages today… 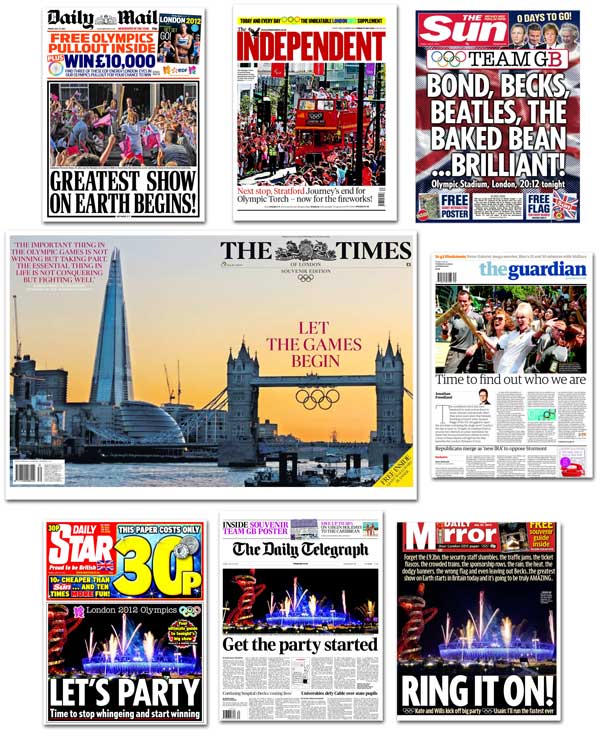 The Department of Corrections. You’ve got to lover a UK Daily Mail correction …

“The New York Times narrowed its losses in the second quarter of 2012 as the newspaper group increased the number of its paying subscribers.” — The Guardian

The media gigs of a MasterChef winner

“After winning MasterChef on Wednesday night Andy Allen spent Thursday in relentless, back to back media commitments. When I spoke to Allen at around 4.30pm yesterday I asked him about the last 36 hours of his life.” — TV Tonight

“The Olympics has always been a part of the advertising game. In ancient times, it marketed the ancient city states of Hellas. Today, it’s a $100 million-plus bet for one of our networks. This time it’s a bonanza for the Nine Network and Foxtel, which is pumping out the action on eight live channels to a record number of subscribers.” — The Age

“According to a report in The Los Angeles Times, Facebook is rumored to be launching a new phone some time next year.” — AppNewser

Bloody hell, United Kingdom, when are you going to tell your newspapers to tone it down a few hundred notches? Sheesh.

So a great person like Ormonde is allowed to go quickly out the door and a pr*ck like Catalano is given a leg up. Says it all.