In a world of art, advancing Australia’s fairs

As Australia's largest art fair opens next week in Melbourne, Crikey examines the growing importance of art fairs in an increasingly global art market. Australia is emerging as a player. 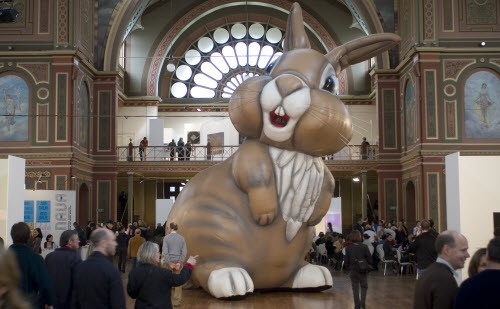 The Melbourne Art Fair opens next week. Held in the capacious surrounds of the old Royal Exhibition Building, it’s one of Australia’s oldest commercial art bazaars, and by most measures the largest, with 82 galleries and artist-run initiatives, 900 artists, and more than 30,000 visitors expected to walk through the doors.

That’s not the half of it though — there’s also an education program led by Amanda Marburg and a substantial forums and lecture program, this year put together by 26-year-old art publishing wunderkind Helen Hughes from Discipline magazine. Crikey spoke to the Art Fair’s co-directors, Emily Rose Davis and Laetitia Prunetti, this week in the lead-up to the show.

“The construction is taking place at the moment, all of our programs are in place and we’re just waiting for the galleries to move in, the commissions to go up, and everything to begin,” Davis told Crikey, with just a touch of excitement catching in her voice. “We’ve got 74 commercial galleries from around Australia and internationally, we have eight project spaces which are showcasing the work of unrepresented artists and independent art spaces, and we’ve got a commission by artist Ian Burns.”

The large-scale installation by Burns, a New York-based Australian, has been commissioned by the Melbourne Art Foundation, which runs the festival.

“What we do is invite the participating galleries to submit a proposal. The foundation owns the work, and after the fair it’s gifted to a national institution or gallery,” Davis explained. “It sits under the dome at the Exhibition Building, it’s quite a vast space, so it’s quite exciting to see what Ian Burns will create … we’ve seen glimpses, but the way Ian works is that he’s always tinkering with it.”

The logistics of the event are a challenge. “It takes about a week for the construction company to come in and build all of the walling and to paint it all on site, and then one day 74 galleries, eight project rooms, everyone comes in one day and installs the shows,” said Prunetti. “It’s incredibly hectic, because not only have you got all the gallery and their staff, you’ve got all the installation people, the electrical companies, each gallery has their own freighting companies, so there’s works that are being delivered that morning by lots of different companies.”

Utopian Slumps is an example of one of the smaller galleries showing at the Melbourne Art Fair. Director Melissa Loughnan, only 30, has been running the gallery for five years. In that time she’s put together an impressive slate of younger and mid-career artists.

“I’m showing Amber Wallis,” she told Crikey. “She’s one of my painters, she makes abstract landscapes, she won the Brett Whitely in 2008 and was on the cover of Art Collector last year. She’s still a relatively early-career artist, she’d be in her early 30s still, and so I kind of wanted to show one of my younger artists at the fair.”

The costs for a small gallery appearing at the fair are significant. “This is my most expensive fair I’ve ever done … it’s pretty impactful on a young gallery,” Loughnan said. “But the reason why I’m doing it is, for me being down a laneway and being one of the edgier emerging galleries, I’m deemed a little bit more experimental and less accessible, so by doing an art fair it opens you up to more mainstream collectors who don’t have time to learn about new galleries.”

There is also a legitimising aspect of participating in an art fair. “It also helps my current following — it puts you on the same playing field as everyone else,” Loughnan said. “Most of my artists are in this weird transition between emerging and mid-career.”

Spurred by the runaway success of Art Basel, the world’s leading art event, art fairs are becoming increasingly important aspects of the international art scene, as recent books on the art world by writers such as Sarah Thornton and Don Thompson make clear. It’s part of an international trend towards an increasingly globalised art market that takes in collectors, dealers and galleries from Asia and the Middle East, as well as the traditional metropoles of contemporary high art in New York, Los Angeles and London.

Those global dynamics have driven a series of mergers and acquisitions in the international art fair scene. Art Hong Kong — founded by London-based impresario Timothy Etchells — has recently been take over by Art Basel, which has long had a second event in Miami Beach in Florida. From 2014, the Melbourne Art Fair will be run by Etchells, who is well-known to Sydney art audiences as the founder of Sydney Contemporary. The Melbourne Art Foundation has given Etchells a 20-year contract, which will effectively merge the management and curation of the two events, giving Australia an alternating art fair calendar with Sydney Contemporary in odd years and the Melbourne Art Fair in the even years.

Ken Fehily, the chair of the Melbourne Art Foundation and a significant collector in his own right, explains that “there’s a lot of competition, and a lot of distress, and people are making choices, and what we had to do was either step up to be best practice internationally, or we’d start to slip”. Fehily thinks Australia faces some serious challenges in competing with overseas art fairs in an increasingly international marketplace. “We are seen in many ways to be irrelevant, we don’t have a strong secondary art market, and I have a great fear that if we don’t step up, we’ll slip back.“I think we’ve got an extraordinary arts movement, but people don’t know about it. What we’ve tried to do is combine best-practice with an international connection which was the reason behind appointing Tim Etchells; he’s got a strong team, he’s got that proven ability. He’ll bring his international collectors, he’ll bring his VIPs, and to be quite honest I’ve heard a number of people suggest that the mere fact that Tim Etchells is involved will cause some people to come and see it.

“The reason we’ve given him 20 years is that I’m expecting him to invest in the first couple of years and I’m not sure if he’s going to make a profit. We want better walls, better international programs, and if he didn’t have time to establish that, establish Sydney Contemporary, he wouldn’t have done that.”

Crikey reached Etchells on the phone in London, currently in the grip of Olympics preparations.

“We’ve always felt, and we’re not alone, that there’s been an opportunity for Sydney to have its own high-end contemporary art fair, but it’s been hard to do because of the potential competitive situation with Melbourne Art Fair,” he said.

Etchells describes the relationship between the two events as “compatible but not competitive”. “I’d describe it to people as two members of the same family, an older brother with a tweed jacket who’s been there quite a long time with a sense of tradition, and a younger sister in Sydney who is slightly more contemporary. But both are members of a family,” he said.

Australia’s art world is becoming increasingly international, Etchells said: “There’s two elements. One is the collector market: you’re certainly seeing more Australian collectors travelling the world, going to different fairs; I saw quite a few of them in New York, we had a unprecedented number up in Hong Kong in May. And then from the gallery scene, a lot of Australian galleries are looking beyond Australia to sell. From memory, we have about 20 Australian galleries in Art Hong Kong this year, which is the most we’ve ever had, and about two to three hundred people came up.

“I think [Australian art] plays well on the world art scene. I think what’s changed in the last five to 10 years is that art buyers around the world are buying globally. Probably 20 years ago, people were fairly patriotic to the countries where they lived and would only tend to buy local artists, but what we’re now seeing is a massive change in that international collectors are being much more adventurous about who and where they buy their art from, which allows the Australians to come in and start to sell … and certainly the quality of the art in many cases is up to international standards, it’s very strong.

“The Australians are playing a pretty significant part in the international arts scene, I’ve certainly seen it in the five years since we’ve been running Art HK, I’ve really seen the difference. What I’m delighted to hear is that many of the international galleries are taking Australia serious, whereas a few years ago they would see it as a fairly marginal territory in which to sell art. But it’s interesting that in developing Sydney Contemporary, I’ve had a number of galleries say to me that they’re interested in coming down and asking what the opportunities are.”

But are there too many fairs now? Is it becoming a saturated market? “There’s been a massive growth in new fairs all over the world in the last five to 10 years, but primarily that’s been driven by the audience,” Etchells said. “I’m yet to ever go to an art fair ands see an unhappy audience. People who buy art love going to an art fair, because its a very open environment and they feel perhaps less intimidated as they might do if they walk into a single gallery.”

The growing importance of art fairs is beginning to change the way galleries and dealers sell art. Utopian Slumps’ Loughnan told Crikey she was considering losing her gallery and instead maintaining a website and exhibiting at a series of art fairs across the year.

Etchells thinks that “we need to be careful about that, we wouldn’t want everyone doing that, but it’s all part of the mix. Increasingly you might see some galleries taking smaller retail presences and going to more fairs. We see in Europe that the average middle-sized gallery will do three or four fairs, and they’ll do a program of fairs maybe in New York, maybe somewhere in the Middle East, Switzerland and perhaps the Far East.”

Why the courts overturned convictions in Brett Whiteley forgery case

No one dunnit: Australia’s greatest art forgery was … a fake.