Did Leigh Sales fail pub test on inflation? Leigh Sales’s bizarre interview with the Prime Minister on 7.30 last night had a number of, erm, highlights. One can only hope the Sales Beer Test — that the PM of Australia give her an answer that she’d give “a mate over a beer” — doesn’t become a new media hurdle for politicians.

But strangest of all was Sales demanding to know “why hasn’t Labor eased cost-of-living pressures on Australians since it’s come to office, as it promised to do?” — on the very day the ABS reported the lowest inflation figure since the turn of the century. For Leigh’s benefit, this is annual CPI each quarter since the beginning of 2006: 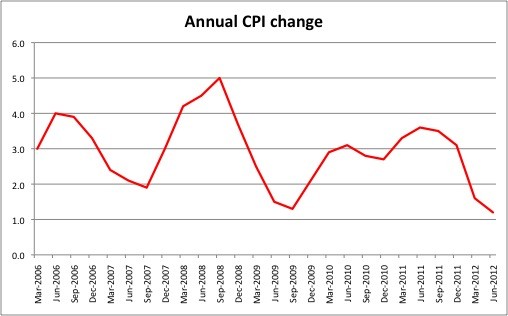 Looks like a downward trend to me, Leigh. — Bernard Keane

Williams on speech freedom ‘claptrap’: Dick. “I believe your threats of High Court action are a smokescreen to deflect criticism from the real issue: your organisation’s biased and intimidating reporting,” Dick Smith says to News Limited CEO Kim Williams in a letter Smith has released publicly.

“You have one agenda only — the pursuit of ever-increasing profits for your shareholders. You have absolutely no interest in anything other than this and you should admit it, not make false claims implying your prime concerns are freedom of the press and democracy.” Them’s fighting words.

Cathy subs for Giaan. Not quite, Nine News (and given Rooney is on the Nine Olympic commentary team, we hope they figure it out before competition starts) … 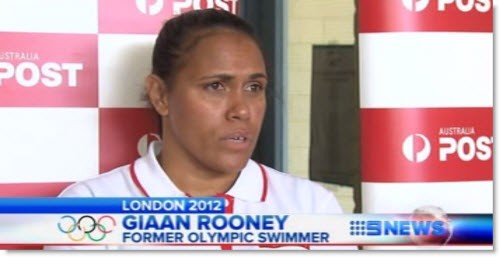 Front page of the day. Today’s South Korean newspaper The Dong-a Ilbo carries on its front page news that North Korean leader Kim Jong-un and Ri Sol-ju — who is thought to be a singer in a North Korean pop band and the mystery woman recently appearing in public at the side of the despot — are now married. Congratulations are in order, we suppose: 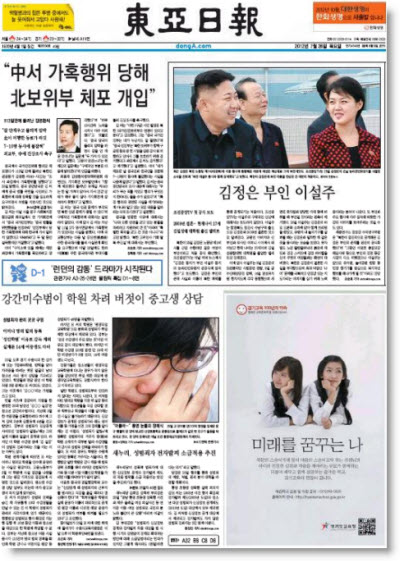 “Fairfax has dominated the short list for the first Kennedy Awards for journalism in NSW. The awards are to commemorate crime reporter Les Kennedy.” — mUmBRELLA

Newsweek to become online only

“Newsweek will eventually transition to an online publication, owner IAC/InterActiveCorp (IACI) said today, marking the beginning of the end for the money-losing magazine’s 79-year run as a print weekly.” — Bloomberg

“The Washington Post is to develop a TruthTeller application which will offer real-time fact checking of video and audio, such as speeches by politicians, after receiving a $50,000 grant from the Knight Foundation’s Prototype Fund.” — journalism.co.uk

“Authorities in the United Arab Emirates have detained net journalists and bloggers among the arrests of 18 lawyers, human rights activists and campaigners. ” — The Guardian

Remember Leigh Sales even appeared to dye her hair a lighter colour for an interview with Gillard (Lateline “2010”?) – and has a distictly taciturn attitude when faced with Gillard or any Labor members, while always finding a giggle or a grin for the Right side of politics. Wearing her prejudices on her sleeve.
Check out her tarty paint stripping interviews with Chris Evans (as Immigration Minister) or Plibersek (armed with her “grab-bag of Labor embarrassments”) for a laugh.