An August rate cut was always going to be improbable, barring a rogue core inflation number (something equal to or less than 0.3%) or a “surprisingly” negative shock out of Europe, which takes some effort these days. The RBA has for a long time been banking on heightened global economic volatility, so the day-to-day ructions rumbling out of Europe should not change its already very stimulatory stance.

How do I assess the impact of yesterday’s inflation data? The policymaking decision should be clear. First, the most credible information we have on economic growth ­– the first quarter national accounts — surprised the RBA (and dovish economists) significantly on the upside. Over the 12 months to March, GDP was at trend or higher — certainly nothing that ostensibly warrants 125 basis points worth of cash rate cuts (or punishment for prudent savers).

Secondly, as the governor revealed, the unemployment rate has remained stubbornly below the RBA’s current forecast of about 5.5%. That’s not to say it will not get there in due course. But, as the Treasury’s David Gruen has shown, the geographic dispersion in unemployment has also declined over time, rather than an increase one might expect with an economy undergoing structural adjustment. So the labour market, which is a key variable the RBA uses to forecast future inflation, has also surprised the bank on the positive side.

Thirdly, rightly or wrongly, the RBA’s board decided to cut the cash rate on four separate occasions since the start of November last year, which has pushed variable mortgage rates a chunky 50 basis points below their inflation-targeting average. If we stretch our time horizon back further — say to 1980 — current housing finance rates look even more accommodating. While the RBA was likely disconcerted by the weakening in house prices in April and May on purely financial stability grounds, it would have been equally comforted by the striking rebound in prices over June and July (see chart below). I expect APM’s index results for the June quarter to be similarly benign. 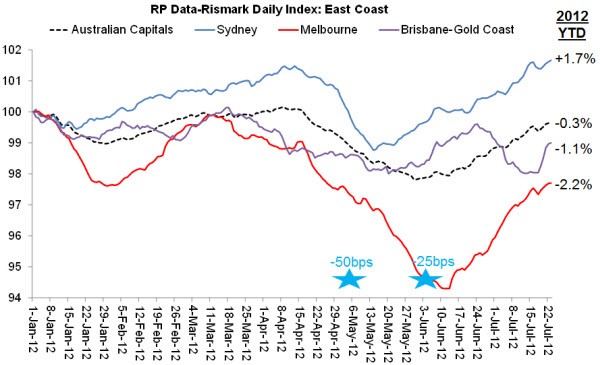 The bottom line is that the bulk of the RBA’s rate cuts since November were rationalised on the basis it needed to furnish Australians with “insurance” against adverse future contingencies (specifically, the December, May and June cuts). The good news is that these catastrophes have yet to materialise, notwithstanding the efforts of some in the popular media to convince us otherwise.

The point that some analysts appear to miss is that the RBA’s research indicates that a cash rate change today takes two years to have its full affect on inflation. Accordingly, we have not come remotely close to yet understanding the practical influence of the RBA’s repeated (and seemingly reflexive) spate of cuts.

What we have seen in the producer and import price data is that the absence of currency appreciation has translated almost immediately into elevated (import) price pressures. With core inflation apparently troughing at the bottom of the RBA’s deliberately “wide” 2% to 3% band (note most central banks consider inflation of 2% per annum quite normal), and much economic stimulation yet to be fully transmitted through the system, the RBA is understandably keen to watch and wait.

This is why I expect most of the remaining economists predicting a rate cut in August to discard their calls. As I previously showed here, a total of 10 economists had dropped their August cuts over the last month. I suspect most (although not all) of the holdouts will quickly follow. To be clear, a cut is still a possibility, albeit a low probability.

*This article was first published at Property Observer

The RBA goes dark on inflation