Fancy getting Paul Keating to negotiate a price on an antique clock for you? A new venture thinks it can help -- but its star-studded team isn't happy, write Cara Waters and Patrick Stafford of SmartCompany

Prominent business people including Gerry Harvey and James Packer, accounting firm PricewaterhouseCoopers and finance giant Citibank have all expressed their outrage at being connected to a new negotiating service that is linked to convicted fraudster Jon McKenney.

The new business, called The Negotiator, aims to offer price negotiations for high net worth individuals, government and industries. Run by former Gold Coast real estate agent Jaydan Jensen, it aims to make its money by taking 50% of the savings made on any deal.

A glossy package of promotional materials advertising The Negotiator has been sent to more than 600 people using the slogan “It’s all about the money”. The promotional materials include a list of “carefully selected high achievers” who have been “invited” to become a member of the company’s negotiating team. 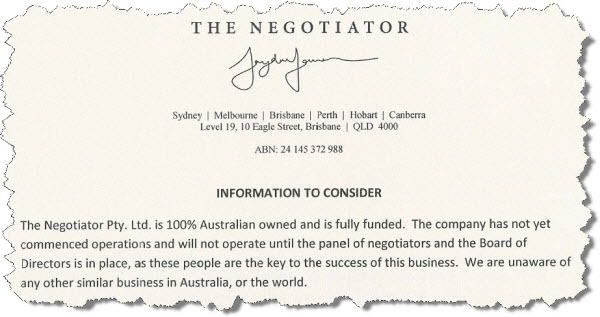 But the first most of the individuals knew about the invitation was when they saw their name in the advertising. 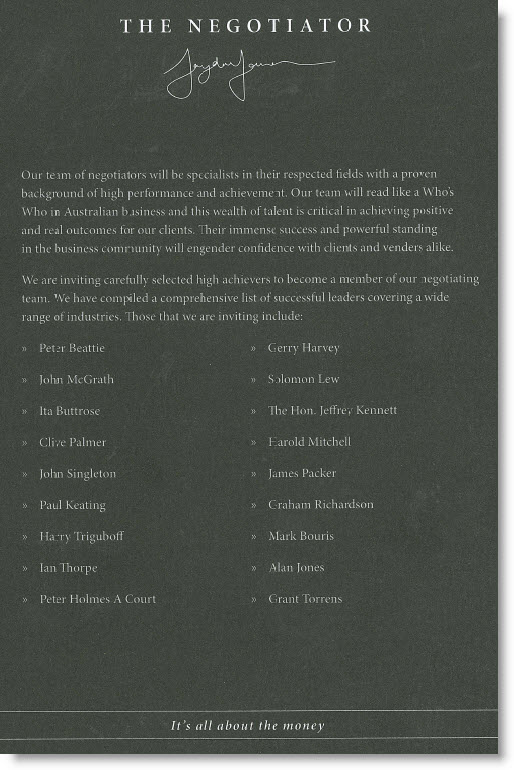 None of these individuals appear to have been asked permission for their name to be used in the advertising materials and all those contacted by SmartCompany expressed their displeasure at the liberties the company has taken.

Ian Thorpe’s representative, Robert Smith, said: “The bottom line is that Ian does not and won’t have anything to do with the company.” Similarly, Jeff Kennett’s assistant said: “Mr Kennett has advised he is not available to join this business and is very annoyed they have used his name without his permission in their material.” And Ita Buttrose’s representative, Winston Broadbent, said: “Ita has received a letter and has not accepted any invitation and won’t be accepting it.”

Gerry Harvey’s assistant said her boss had received the black package with its gold embossing and wax seal last week. “I can advise it was discarded to the waste bin by Mr Harvey.”

But it’s not just the big names who are unimpressed. Top-end professional services firms Freehills and PwC and banking giant Citi are also featured on the invitation. “Our accountants (Price Waterhouse) and our legal advisers (Freehills) believe strongly in this business concept and will be advising their clients of this service and encouraging them to use The Negotiator as soon as we become operational,” the promotional materials say.

When asked what Freehills’ involvement is in the business, Jensen says “we’ve worked very closely with Freehills”. He claims Freehills is “100%” aware that The Negotiator is using its name in its advertising but Jensen “couldn’t confirm or deny” whether PwC is aware of the use of its name. Freehills declined to comment.

However, a spokeswoman for PwC says the accounting firm was not aware that its name was being used and is not affiliated “in any way” with The Negotiator or Jensen. “PwC has become aware that an organisation trading as The Negotiator is claiming in its promotional material that PwC are its accountants. This is not the case,” they said.

“We have commenced taking steps in relation to the unauthorised use of the firm’s name and the misrepresentations that have been made.”Alistair Morgan, head of legal at Citi, says Citi does appear to have a banking relationship with The Negotiator and “didn’t generally give permission to use our logo in that manner”.

Jensen told SmartCompany the company hadn’t started operations and wouldn’t until its panel of negotiators and board of directors are in place. “We work with high net worth individuals and go and negotiate on their behalf on luxury items, yachts, cars or whatever,” he said.

“If we don’t produce any savings for them, we don’t get paid. So if [former Westpac chief executive] David Morgan was looking at buying a $4 million boat and he researched and found one for $3.2 million, we have [marine broker] Grant Torrens, who has been in the boat industry, he would try and get a deal below that price.”

While The Negotiator may not have the bank on board, the promotional materials for the business say it is “fully funded”.

Jensen originally told SmartCompany the person funding the business is Jon McKenney, who Jensen says also came up with the idea for the business. “He recently purchased a couple of boats and was looking for someone like this out there but, unfortunately, there was nothing. There are brokers but they were specialised in individual industries,” he said.

McKenney was sentenced to 4½ years in jail in 2002 after pleading guilty to charges brought by the Australian Securities and Investments Commission relating to his role as a managing director of the Lifestyle property group. The charges included failing to act honestly, making improper use of his position as a director of several companies within the Lifestyle group, and making a false or misleading statement in a document lodged with ASIC.

McKenney and his business partner at the time were found to have obtained and used around $5.46 million from investors for property development projects undertaken by the Lifestyle group.

John Williams, who is an “adviser” to Jensen, has since told SmartCompany McKenney is “just a friend” of Jensen’s and did not provide any funding for the business. “They know each other and Jon McKenney has nothing to do with the business at all; the business is Jaydan’s,” Williams said.

However, Williams was unwilling to disclose who had provided the funding for The Negotiator or to provide any information that shows McKenney is not involved. “No, it’s a private company and there’s no need to disclose it to anybody to be honest,” he said.

Jensen now says McKenney is not involved, but again will not provide information on how The Negotiator is funded.

The Negotiator represents a new venture for Jensen, whose background is in real estate. His LinkedIn profile still lists him as a “sales Consultant at Coronis Realty” in Queensland. “I’ve spent the last 11 years in real estate, including Sovereign Island, Paddington in Sydney and I run an office in Paradise Point on the Gold Coast,” Jensen told SmartCompany.

Despite his limited experience and the negative response from the invited members of The Negotiator contacted, Jensen is upbeat about the prospects for the business.

“The response has been quite good so far, it has been very encouraging, at the moment we are just aiming at a select group of people just over 600,” he said. “We will look at going into the government sector and mining and so forth, but not for the next 18 to 24 months.

“It’s just in start-up at the moment and things are looking great for it.”

Mayne: what are the backgrounds of ASX100 chairs?

Will all Jaydans an Brayydanns go straight onto ASIC watch lists in future?