From the Crikey grapevine, the latest tips and rumours … Better stay home. Which federal minister has apparently put off an overseas trip with a new department head, saying they needed to stay in the country as “something is going to happen within the party”? And we’ve heard that another minister is “spending hours each […]

Better stay home. Which federal minister has apparently put off an overseas trip with a new department head, saying they needed to stay in the country as “something is going to happen within the party”?

And we’ve heard that another minister is “spending hours each day running an anti-Gillard pro-Rudd campaign, chatting up journalists and organising stories”. Any other insider tales of Labor leadership turbulence? Drop us a line.

PMO deckchair shuffle. Congratulations to former Jenny Macklin chief-of-staff Ryan Batchelor who has succeeded Ian Davidoff as Prime Minister Julia Gillard’s director of policy. Davidoff was appointed last month to the International Monetary Fund and the well-respected Batchelor took up the cudgels on Monday. No word as yet on a replacement at the helm of Macklin’s office.

Right to privacy: your experiences. Our piece yesterday from an anonymous former TV current affairs reporter was met with an avalanche of responses attacking the hack for the dodgy practices of TV crews. Including this anonymous comment:

“I lost a loved one in an incident that was a huge media story. The behaviour of the media was beyond despicable. They called any family member they could and said horrible things that they knew to be untrue in order to use the response as a quote, they harassed family and friends for photographs including knocking on doors repeatedly in the early hours of the morning and claiming they were doing so because they had a deadline and would not go away until they got what they “needed”. The family chose to engage lawyers and some media outlets ceased their harassment and turned to victim blaming. The media had helicopters circling over the church during the memorial service. The family, via their lawyers, had specifically asked the media not to enter the church. They did not respect that request. When the story developed later, the media took photos of family grieving at the grave site. They willingly and knowingly rubbed salt in to a painful, painful wound.

“We are well past the point of allowing the media to self-regulate. If the story of Molly Lord’s family, or indeed my story and the story of thousands of others in grief, does not illustrate this we only need turn to the UK to look at News Corp’s conduct. They have ably demonstrated they are not capable of self-regulation.

“As consumers, and as voters, we need to demand of them behaviour that instead ably demonstrates their willingness to ‘comfort the afflicted and afflict the comfortable’.”

Much of the feedback slammed self-regulation of the media and backed calls for greater privacy protections. It’s a case that may get stronger. Have you or people you know had negative (or positive, for that matter) experiences dealing with the media? Where should the line be in reporting in personal tragedy? We’d love to hear from you — on email or anonymously …

KK is leaving the building. Voters with a burning desire to say thanks to outgoing MP Kristina Keneally may do so at her “Thank You Dinner” on August 3.

“Don’t miss your chance to join us at dinner to thank Kristina Keneally for her service to the people of NSW as Premier and as the Member for Heffron … Please respond early as tables are limited,” the invitation reads. We can report that not everyone who received it is planning on stumping up $75 ($65 concession) to join the shindig at the Randwick Labor Club.

The ex-premier is moving on from her role as an MP to become the chief of Basketball Australia. But as one Keneally exits politics, keep your eyes peeled for another entering the fray; husband Ben is tipped to make a tilt for the mayoralty of Botany, NSW. Know more? Let us know.

Setting the record straight on the Australia Network. Yesterday we ran a tip that with the ABC’s Australia Network service switching from the Nine affiliate NBN to Mediahub in Sydney, some  jobs — we heard eight or nine — had been lost at NBN. An insider wants to refine the story:

NBN only supplies the rented playout space to Soul Telecommunications, which in turn is owned by TPG, the internet company. The original contract was with SPT, which then owned NBN, then when TPG bought SPT, NBN was sold off to the Nine Network. The closing contract represents a loss of a multimillion dollar loss to TPG. NBN was looking to pick up part of the new contract 12 months ago during the DFAT contract renewal debacle. 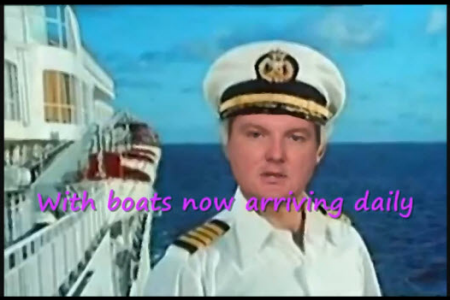 A grab from the video

And while you might think the issue of asylum seekers is, in fact, entirely separate to the carbon tax, the producers have managed to squeeze the tax into their ad, which features all the misplaced capital letters you might expect.

Over to you, Brisbane. As if it wasn’t bad enough that Brisbane stole Sydney’s 2014 G20 summit, now those banana-benders are boasting that they have better tunnels.

Brisbane’s Airport Link tunnel opened at midnight and reports so far indicate it’s a smooth ride. Deputy Premier Jeff Seeney eloquently praised the tunnel’s “sense of roominess”, and added “certainly the Sydney tunnels are much more claustrophobic then this one”.

Can any Brisbane readers offer us a review of the spanking new tunnel? It’s free until August 22. Extra marks for eloquence, Seeney-style. Drop us a line here.

Since the much talked about Brisbane Tunnel was not built in the last
few weeks, (I’m not a resident of Qld) I take it that Anna Bligh and her
LABOR government, planned, built and financed it. Trust the LNP to
take all the credit while going on about the state being bankrupt!!
Typical!!!