Melbourne byelection gets the headlines in a quiet week

The biggest political story, leadership speculation aside, was the Victorian byelection which saw Labor maintain its 100 year hold on the seat of Melbourne.

We’re not sure much actually happened this week in Australian politics, with world news stories, the parliamentary winter break, and Opposition Leader Tony Abbott’s overseas trip the main contributors towards a relative lack of political coverage. No surprise then that the vacuum was filled by another round of leadership speculation between PM Julia Gillard and her predecessor Kevin Rudd, blow by blow accounts of the legal quarrels surrounding rested House Speaker Peter Slipper and the release of Ian Temby QC’s findings on the HSU East branch.

With the dearth of new material, much was made of the first online “Hangout with the PM”, as Gillard continues her strategic efforts to be a key social media player in Australian politics. And if she wants to boost her engagement with voters then her social media strategy appears sound – much of the audience was delivered by her adversaries, although the angle most reported was that her event had been hijacked.

The biggest political story, leadership speculation aside, was the Victorian byelection which saw Labor maintain its 100 year hold on the seat of Melbourne. Federal Melbourne MP Adam Bandt campaigned on behalf of Greens state candidate Cathy Oke, whilst ALP candidate and eventual victor Jennifer Kanis distanced herself from any such help from her Federal ALP colleagues. It might have been a state by-election, but our numbers demonstrate it held national appeal. 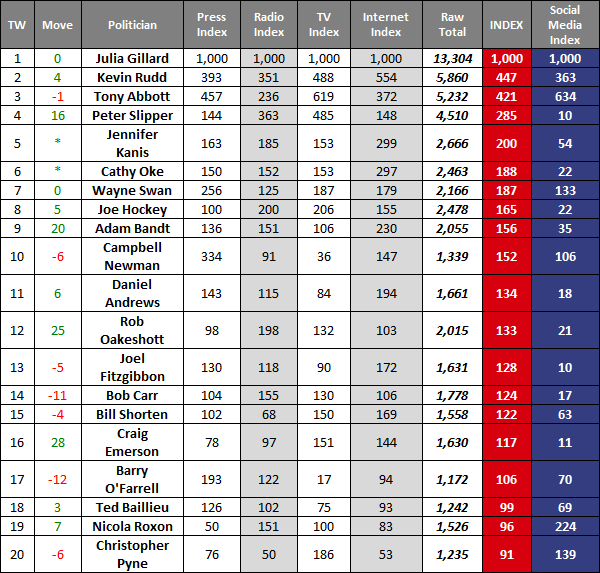 The social media influence wielded by ABC TV’s Q&A program — with its ability to drive political conversation on Twitter — is on show this week as appearances by Nicola Roxon and Christopher Pyne land them in our top five.

The UK cyclist’s Tour de France win was sure to make headlines, but interest here in the race was piqued following Cadel’s victory last year and the connection to Wiggins’ Australian father.