Kohler to cut through News clutter. What “clutter” could Alan Kohler’s Eureka Report — a new addition to the News Limited stable — be referring to? Presumably not the opinionistas at The Australian … 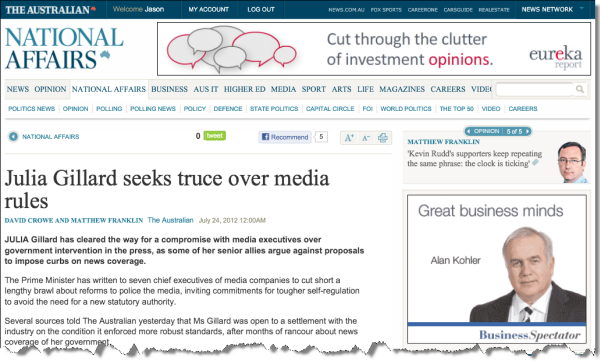 The missing question. Julia Gillard ventured online over the weekend for a “face the people” session. Fairfax Media and oursay.org.au hosted “Hangout with the Prime Minister”, a one hour grilling on a live web forum, with users able to pre-vote for the most popular questions. The guarantee was that the top three would be put directly to Gillard.

The issues, in winning order were:  gay marriage, indexation of defence force superannuation, and the appropriateness of the national school chaplaincy program. All very worthwhile stuff. But never let it be said that Gillard won’t go the extra mile. She stuck around for a further 14 questions, with the fifth and sixth most popular questions (both on carbon pricing) also getting a run.

The latter was a question promoted by Andrew Bolt: “by how much, measured in thousandths of degrees Celsius, will the Earth’s temperature be reduced through carbon tax?”, which is a bit like those mounting an argument in support of uranium mining asking, “exactly how many people, measured in units of one, will be killed by a nuclear bomb if it’s detonated over New York on April 1, 2013 at 9.56 am?”

My point being, it’s a very stupid question because the answer is, “we don’t know … but it would be a shitload”. And the answer to Bolt’s question being, “given the seriousness of climate change, does it really matter?”

Question eight (a worthy one about suicide rates) got up as well, as did question 13, 52 and 88, along with eight unlisted questions. The one, most notably, which didn’t get up, was the question that finished fourth. It read: “dear Prime Minister, the Stronger Futures legislation was recently passed in the Senate, subjecting Aboriginal people in the NT to 10 more years of interventionist policy. This is despite overwhelming opposition expressed from Aboriginal leaders, national organisations, the general public and even condemnation from the United Nations. How can we call ourselves a country of the “fair go” if the government is now refusing to allow a human rights test of the legislation by the Parliamentary Joint Committee on Human Rights, as called for by the National Congress of Australia’s First Peoples?”

An excellent question. So why didn’t it get up? And why, instead was Andrew Bolt’s latest nuttery given an airing? Last time I checked, he had a voice, albeit shrill. Aboriginal people, by contrast, do not.

I acknowledge Fairfax’s attempts to include a broad cross range of s-xes, views and cultural backgrounds in the forum. But I think the question that Fairfax, indeed all media, should answer is this: when is the Australian media going to realise that its collective indifference to Aboriginal suffering is a big part of the reason why Aboriginal people live so poor, and die so young? — Chris Graham

Front page of the day. Today’s UK Independent leads strongly with the news that eight News International employees — including Rebekah Brooks and Andy Coulson — have been arrested as part of ongoing investigations into the News of the World phone-hacking scandal: 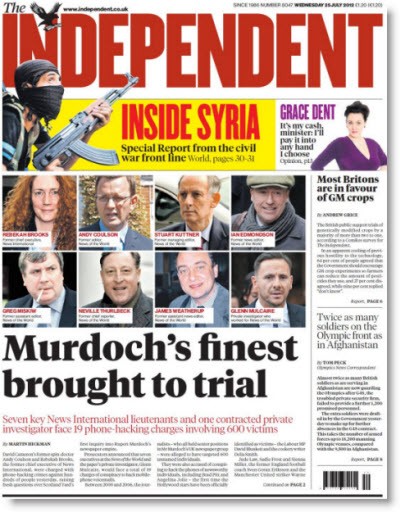 “Seven News is under growing pressure over the question of whether it intruded into the privacy of a mother whose daughter had died in a quad bike accident.” — mUmBRELLA

“The Associated Press has updated its social media guidelines with a change which clarifies that its journalists are allowed to tweet breaking news even if a story is not yet on the wire.” — journalism.co.uk

“There may be talk about The Sun‘s future ownership, but it hasn’t affected the paper’s desire to attract more readers to its website. The paper has announced that an online make-over is coming soon. And it’s fair to say it has been badly in need of a revamp for some time.” — The Guardian

Is crowd-funded journalism the answer?

“One journalist in Michigan has raised funding through a Kickstarter campaign so he can travel around the US interviewing people about the upcoming election. Could crowdfunding allow other journalists to do investigative or in-depth projects as well?” — Business Week

Rather in the line of: “you have been told, it’s good for you, so shut up and eat it”, try –
“scientists have told us the climate needs it, so shut up and pay your carbon tax.”

And no matter how ugly your shrill fantasy gets, it remains fantasy. Nuclear is the only full-scale option that won’t cause climatic disasters with millions of casualties.

“Last time I checked, he had a voice, albeit shrill. Aboriginal people, by contrast, do not.”

Chris,
Don’t underestimate yourself as a part of the voice of Aboriginal people in Australia. That said, I agree that the question concerned was far more valid than Bolt’s piece of loaded propaganda, and should have been addressed by several of the parameters used in addressing the additional questions that were covered.