Barely two-thirds of voters bothered to show up to vote in last weekend's Melbourne byelection. Was it the absence of a Liberal candidate or a general apathy and disillusionment among the electorate?

Late counting in the Melbourne byelection hasn’t changed the overall shape of the result (Labor has a narrow but adequate lead of 770 votes), but it has at least pushed the turnout figure above two-thirds, to a still-woeful figure of 67.43%. In an electorate with almost 45,000 enrolled voters, about 14,600 of them failed to show up.

Two main explanations seem to be offered for this. One is a general apathy and disillusionment among the electorate, particularly young people; the other is the absence of a Liberal candidate, supposedly leading to a lot of Liberal voters staying home.

I think there’s an element of truth in each of these, but even taken together they don’t explain the large drop in turnout.

Consider the Liberal voters first. At the 2010 general election the Liberals had 28% of the vote; on Saturday the three fundamentalist candidates and two broadly Liberal-aligned independents (Stephen Mayne and David Nolte) won 15.5% between them. Add in some more going to the donkey vote, the informals and the range of other independents, plus the 3.7% increase in the S-x Party vote, and you’re clearly not very far off the expected level of Liberal support.

Moreover, if it was mostly Liberal voters staying home, you’d expect the turnout to have dropped more in the strong Liberal booths and less elsewhere. But there’s no such pattern. In East Melbourne, for example, the strongest Liberal booth in the electorate (and where — disclosure — I was scrutineering for Mayne), the vote was down 2.9% on 2010, only a little more than the 2.3% average across the booths.

What about general apathy — are byelections generally showing a disengagement from politics? To some extent they are, but Melbourne is very much an outlier. Here are the figures for the past few years worth of byelections across Australia, showing the turnout compared to the previous general election and also whether or not there was a contest between the major parties: 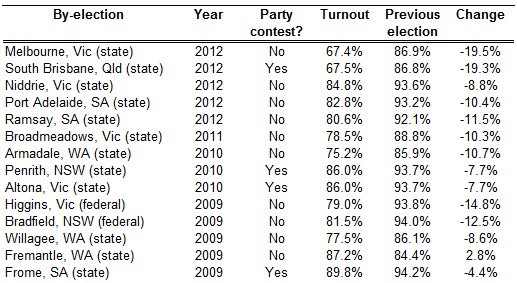 A drop of somewhere about 10% is normal; it tends to be less when both major parties are standing, but not by a great deal. Certainly the list includes several that, on anyone’s account, were more boring than Saturday’s contest, but where the turnout still held up much better.

One, the South Brisbane byelection earlier this year, recorded a turnout almost as low as Melbourne (indeed with counting of late postals the Melbourne figure may still edge ahead). No doubt that was partly due to a fatigue effect, coming only a month after the state election with the retirement of former premier Anna Bligh.

But it’s surely significant that South Brisbane and Melbourne are similar sorts of electorates: both inner city with lots of young voters, particularly students, who are disproportionately likely to move around without necessarily bothering to update their enrolment details.

In a general election that’s less of a problem, because even if (for example) they’re now living back with their parents in the suburbs, they can turn up to a polling place there, discover that they’re still enrolled for the inner city, and fill out an absentee vote. (If they’ve permanently moved then there’s a fraudulent aspect to this sort of transaction, but no doubt it still happens.)

But in a byelection there are no polling places outside the electorate, so no absentee votes. In 2010 the absentees in Melbourne amounted to about 4500, or 10.2% of the enrolment. That must be a big part of the explanation for the drop in turnout. And since those young voters are more likely to vote Green, it also helps to explain Labor’s somewhat unexpected victory.

Further confirmation comes from the outlier at the other end of the above table, the Fremantle byelection of 2009. It defied the precedents by actually recording a higher turnout than the previous general election. But because it was held in conjunction with a statewide referendum on daylight saving, absentee voting was available. (Even taking that into account the byelection turnout was very good, but no longer so exceptional.)

That’s not to deny that voter disengagement is on the rise. Byelections in previous decades haven’t shown such steep decline: to pick one example at random, the Corio byelection of 1967 produced a turnout of 93.4%, down from 95.9% at the previous general election. But beware of putting too much faith in the simple explanations.

Very interesting Charles. In addition, the state of the electoral roll, ie the denominator in the turnout equation, is also important although hard to quantify. In South Brisbane it would have been in relatively good shape, ie big, because there had just been an election.

Victoria began direct enrolment before their last general election, but didn’t enrol very many that way before the poll. If they have since directly enrolled lots of Melbourne voters recently (I don’t know if they have) that could account for some of the low turnout.

I think it was a combination of both these factors. If it was just fatigue, you would expect the voter drops to be across the board. For example, the amount of votes cast (for candidates+informal) in 2010 was 38176. In 2012 it is 30629 (which is a 20.7% drop). You would expect that drop to be unformily distributed across the left/right and independents. However, while the left wing party vote (Greens+ALP+Sex) registers at 19% drop (pretty close), the Right aligned party vote (Family first, CDP,DLP,Mayne,Nolte) registers a 58% drop. In fact, if you add the increase in votes for both the informals and other unaligned independents to the right aligned party votes (assuming that all votes gained by the independents and informals belonged to cynical Liberal voters…a big assumption), you still have the right aligned party vote dropping by 29%. I think based on that, you could say that even allowing for apathy more than 9% of liberal voters in Melbourne didn’t vote in the by election (at least 925 people)

Groan… yet another “explanation” as to why what everyone in the media predicted (wanted?) DIDN’T happen.. Please give it away guys, it’s professionally demeaning. The best thing that could be said about this explanation is: “Clutching at straws.”

How about this: (1) The Greens vote has peaked, it can’t go any higher. (2) Greens can ONLY win a lower house seat if the Liberal want them to (Bandt). (3) Voters are not stupid. Painful as that statement must be to Crikey pundits, voters want their MPs’ policies to be costed, feasible and achievable. The Greens simply can’t do that. This bi-election proved it.

Would they now be fined? Or if not, why not?

The other thing about South Brisbane is that it was torrential rain nearly all day so a lot of people didn’t leave their houses even though they all knew it was also a council election that day.