The Oz quotes its own

I drew attention at the weekend to a new form of reporting political news whereby political correspondents quote their own paper's columnists as sources.

Further to go. Well, the mob have copped the first part of the carbon tax bribes and Newspoll puts the Labor vote down in the 20s gain. Not much joy there. And where will it be when the new bigger carbon tax power bills start arriving? There’s further to sink yet than 28.

Quoting your own. In one of my departing contributions to Crikey‘s The Stump I drew attention at the weekend to a new form of reporting political news whereby political correspondents quote their own paper’s columnists as sources.

The Sydney Morning Herald were the innovators using Mike Carlton and Robert Manne to counter the views of  Paul Howes, the national secretary of the Australian Workers Union, and Bill Ludwig, its national president, who  insisted that the union will play an active role to shore up Julia Gillard’s leadership if necessary.

Said the page one “news” story, the Ludwig-Howes “support is countered today by the Fairfax columnists Robert Manne and Mike Carlton who say Ms Gillard is leading Labor towards annihilation and must be replaced.”

Well the self quotation disease is spreading. This morning it is The Australian’s turn. In a report on the latest Newspoll Matthew Franklin, billed as the paper’s chief political correspondent, wrote: 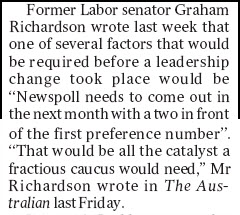 My favourite reason. Comments by politicians on bad opinion polls are wonderful things. I just love the hollowness of that old favourite “the only poll that counts …” but surely the prize should go to variations on the theme that “we just have to sell our message better.”

And so this morning’s winner is Workplace Relations Minister Bill Shorten from the ABC’s 7.30 program last night:

LEIGH SALES: There are many members of the Labor caucus who are nervous that if Labor’s position under Julia Gillard doesn’t improve that they’ll be out of jobs when they lose their seats at the next election. What would you say to those people in the caucus who are contemplating a change of leadership as a desperate bid to save their own seats?

BILL SHORTEN: What I would say – and most members of the caucus, and I do talk to them quite frequently, they wanna see Labor get its message out. They wanna see that Australia’s set up not just for the next 24 hours or the next opinion polls, but for the next 10 and 20 years. That’s why we’ve increased the retirement age; that’s why …

LEIGH SALES: So why shouldn’t they change leaders then?

BILL SHORTEN: Well because ultimately it’s ideas that win the day, not just popularity polls week in, week out and Labor has to be for the long haul, not the short term.

Ah yes. The glorious faith that all will be well when the slow learning public finally wakes up to what we are doing. Never a thought that the public might have woken up already so that in the long term we really will be all politically dead.

The political followers. Just a little something to think about when you look at the number of followers politicians have on their Twitter and Facebook pages.

A study by Marco Camisani Calzolari, who teaches corporate communication and digital languages at the IULM university in Milan has posted on his website the first results from his mapping of political parties’ and leaders’ Twitter followers. The professor found that some 327,373, or 54.5%, of the 600,000 followers of the leader of the Five Star Movement (M5S) political party are almost certainly bogus. His actual followers number 164,751, or 27.4% of the total. Of the remainder 6.3% are protected accounts, where it is not possible to monitor interaction, and 11.6% are dubious accounts.

Now we know it’s serious. No it’s not the 10 year bond rate hitting 7.5%. What definitely makes the Spanish financial crisis serious is the disappearance of the siesta.

New rules allow retail outlets to sell during the traditional afternoon snooze from 2pm to 4pm, and on an additional two Sundays or holidays a year for a total of ten.

“When everything was fine, nobody complained, but now that things have gone awry, then it’s another story,” said Carmen Cardeno, director general for domestic commerce at the nation’s economy ministry, which created the rules. “We need to evolve and be more flexible.”

A quote of the day about Czech patriotism

“They don’t like talking about patriotism openly, but it’s pretty evident in the way they look after their cities and towns, which look like something out of fairy tales, out of stories for kids. Even the belief in the nonexistent Jara Cimrman — a Czech genius who can be compared only with Leonardo da Vinci — is a form of patriotism. Czechs are the only nation that ever created a nonexistent hero. And they’re proud of it. Patriotism isn’t just about fighting for one’s country.”

@Carlton: Stick with reporting the news. It isn’t for the likes of you to be trying to make it.