‘On shaky ground’: Australians hate coal, so what do we do now?

Research has found coal is Australia's most hated energy source -- yet it's a major export item which also generates three-quarters of our electricity. What's going on?

Talk about biting the hand that feeds you.

Research released by The Climate Institute today has found that coal is Australia’s most hated energy source. Focus groups and an online poll gauged the views of more than 1000 people in April and May this year on their preferred energy sources, and coal came last. Even nuclear power fared better.

Two-thirds of the people surveyed placed coal in their bottom three (that is, least popular) of the nine energy sources listed. There’s another way of crunching the numbers by which nuclear is less popular than coal — looking at which power source was ranked in last place — but either way, coal is on the nose.

It’s an interesting result from the world’s largest coal exporter (A$46 billion of exports in 2011), and from a country that generates about 75% of its electricity from coal.

Australia has derived much of its present prosperity from its abundant black and brown coal reserves, which at current production rates will last for more than a century. So what does this research tell us — that the public wants out? 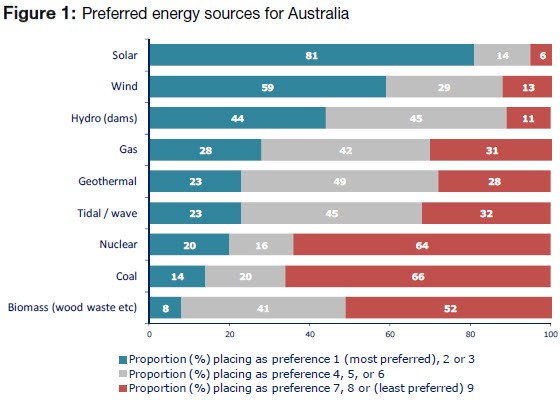 Source: the Climate Institute, “Climate of the Nation 2012”

Connor says it’s “quite fascinating” that coal power ranks behind nuclear power. “Australians are aware of coal and all that comes with it, and it’s very clear that they want clean energy,” he said.

The survey found solar was the most popular energy source, with 81% of respondants putting it in their top three; wind came second, then hydro. Connor says there is broad support for renewable energy, and politicians should facilitate that shift “as soon as possible”.

The Australian Coal Association is not commenting on the research, but Nationals Senator and staunch supporter of the industry Ron Boswell isn’t so shy.

“You tell John Connor I’ve campaigned for 30 years, and how you ask the question, well you get the answer you want,” Boswell told Crikey. “He is totally wrong … I’d like to see him go up and say that in the coalfields in Queensland, ‘don’t worry but we’ll give you a nice green job’.

“Yeah, people don’t like coal … but if you say ‘are you prepared to burn coal and it will cost you 20% less for your power’, then you probably will burn coal. If John Connor thinks people are happy to pay more, tell him he’s dreaming.”

Boswell argues many punters don’t understand the costs involved in switching to renewable energy like solar, which he describes as “the most inefficient way of producing power”, with wind “pretty bad” in terms of cost.

Certainly the numbers indicate it would be a very big call for Australia to shift away fr0m its heavy reliance on the coal industry. The ACA calculates that Australia is the world’s largest coal exporter. According to DFAT data from 2011, coal ($46.8 billion) is our second largest export after iron ore ($64.1 billion). Coal exports surged almost 9% in 2011 alone. Sales of thermal coal, which make up a lesser share of Australia’s trade than metallurgical coal, increased by almost 25% in that year. Overall, coal exports boomed by almost 300% in the decade to 2011.

And there’s plenty of paydirt left — the federal Department of Resources, Energy and Tourism has estimated that at present rates of production, there’s 539 years of brown coal-mining left, and 111 years for black coal.

And some of the coal stays here — about 75% of Australia’s electricity is generated from coal, according to the federal government’s Bureau of Resources and Energy Economics. In 2009-10, solar PV generated 0.3 TWh of electricity, compared to 180.5 TWh from coal.

So Australia runs off coal and makes a great deal of money from selling it overseas, yet Australians say they don’t like coal and would prefer renewable energy. Try figuring that out, Canberra.

What a pity the efficacy of electricity generation technologies is determined by the laws of physics instead of democratically. Our energy mix needs to be determined by what works most effectively, not what’s most popular.

Without having seen the questions, there appears to be a fundamental dishonesty about this survey in its implicit equation of (say) wind with nuclear, as if the two are approximately equivalent and interchangeable in performance terms.

Mark: I am sure you must have read reports like Zero carbon emmissions
by 2020:
http://beyondzeroemissions.org/zero-carbon-australia-2020
and other such reports and projections.

It is viable. But people with a vested interest in the exisiting fossil fuel
system keep telling the rest of us it is not able to work.

So, can I ask you: do you have any vested interest in the current
system? Any conflict of interest that makes you suggest that alternative
energy sources cant work for Australia?

Survey is pretty clear I’d say. People know using coal to generate
electricity is an old technology developed in the 1880’s when there
were limited alternatives. Its filthy, finite and leaves a lasting legacy
for this and future generations to deal with.

So lets work on the alternatives ASAP and remember anything the
coal industry says is loaded with self interest.

James K, your first presumption is correct, I have indeed read the ZCA2020 and other reports of similar ilk. Have you read the critiques of them? Try bravenewclimate.com/2010/08/12/zca2020-critique/ as an example. In a nutshell: the ZCA2020 plan is a trillion-dollar recipe for rolling blackouts and/or carbon leakage with deindustrialisation.

Your latter presumptions are decidedly incorrect. Quite the opposite, in fact. I’m even more opposed to the current system than ‘100% renewables’ advocates; at least they aren’t illegal under the status quo, as nuclear presently is in Australia. And just about the only direct shares I own are in renewable energy companies. Other than that, my only vested interest is in decarbonisation and a reliable electricity supply capable of supporting a fully functional 21st century economy.

Thanks Mark. I will read the links you have offered.

I am still going to admit up front, that I believe technology will
continue to improve and that solar and wind and tideal and
geothermal etc, together will be a better future for us and others
around the globe. Even if there are problems with the technology
today, right now, such problems will be overcome. They have to be.