On Assange, government defiant in face of reality

The government's insistence on ignoring the Obama administration's investigation of Julian Assange is becoming increasingly untenable as public evidence mounts of a grand jury and a continuing campaign by the US government against him.

The government’s insistence on ignoring the Obama administration’s investigation of Julian Assange is becoming increasingly untenable as public evidence mounts of a grand jury and a continuing campaign by the US government against him.

In a response to a recent letter from Melbourne QC Julian Burnside, acting for Assange, acting Attorney-General Jason Clare refused point blank to respond to direct questions about whether the government had asked the Obama administration if it was conducting an investigation of Assange’s journalism as editor of WikiLeaks. Instead, Clare resorted to the government’s standard line that the US has not laid any charges against Assange. 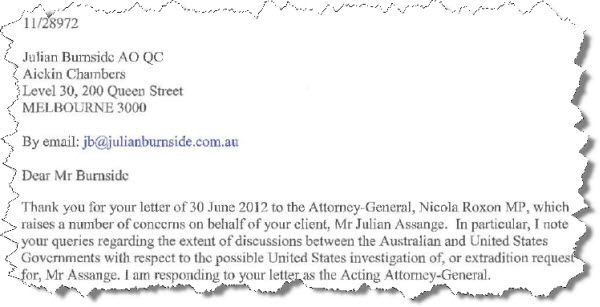 While the existence of a sealed indictment of Assange remains formally unconfirmed, an investigation of Assange was confirmed by the Obama administration on the public record late last year through an agent giving evidence at the pre-trial hearing of alleged WikiLeaks source Bradley Manning, currently enduring an almost Kafkaesque military trial in which his ability to call witnesses or raise exculpatory evidence has been severely circumscribed.

On June 30 this year, a Department of Justice spokesman again confirmed that there continues to be an “investigation” into Assange for his journalism. We also know there is a grand jury investigating Assange via several subpoenas, including that of David House, who recently published a transcript of his appearance on June 15, 2011 before the grand jury (much of which is hilarious), based on notes that Department of Justice prosecutor Patrick “phalanx of attorneys” Murphy demanded House stop taking.

And as Crikey recently reported, this year has seen several activists and journalists stopped and interrogated for their connections to Assange (Four Corners followed up some of this last night).

With so much evidence now on the public record of an investigation of Assange for his journalism and of a grand jury process, the Australian government’s refusal to say anything other than a obstinate insistence that no charges have been laid has become a straight refusal to acknowledge reality. Clare’s letter carefully and tightly frames a response to Burnside’s direct questions about whether the government has inquired about the investigation or the grand jury by talking only about the “issue” of whether charges have been laid. “The Minister for Foreign Affairs has raised this issue … The Attorney-General has also raised this issue,” Clare says.

That issue, of course, is a cover for either gross deception by the government as to the advice it has received from the Obama administration, or a wilful blindness as to its intentions.

Clare also clearly states for the first time the government’s belief that there is no grounds for the view that the “temporary surrender” mechanism that exists in a treaty between Sweden and the United States (but not between the UK and the US) has less appeal or procedural rights than standard extradition. Clare says:

This is a key point in dispute between the Australian government and Assange’s lawyers, who insist there is doubt over whether the Swedish government would be required to observe standard extradition protections for a temporary surrender, or whether Assange could be handed over by Sweden to the United States before he has time to appeal against surrender, given the close relationship between the current Swedish government (with its prime ministerial consultant adviser, one Karl Rove) and the United States. There are many lawyers who agree with the government’s interpretation.

For Assange, however, the stakes are much higher than a mere legal point of difference; it may involve an extended prison sentence for his journalism or even his life.

Now I know that I will be howled down as either naive or ignorant on this site for this but let’s say there s an active investigation and a “sealed grand jury” into Assange in the US at the moment, that does not mean that they will find he has a charge to face, or that if they do find he has a charge to face & that if he returned to Sweden he would be extradicted, or that if he was extradicted he would be found guilty of a crime, or that if found guilty he would serve time in jail.

At every point in the process so far and into the future he has had access to legal representation and due process, if he is charged he will not face the same charge or the same process as Manning and even if the US govt does have a vendetta against him they do not have control of the judicial system.

Agreed Jimmy. The deification of Assange and the conspiracy theories that continue to haunt the halls of crikey (I can understand from Guy Rundle, but now BK?) are getting tiresome. To quote from the greats…”He is not the messiah, he’s a very naughty boy”

Exaclty Scott – On this site there is the constant assertions that somehow he will be black bagged and even somehow disappeared en route from England to Sweden despite him being particularly famous. I mean it’s not like we are expecting the Spanish Inquisition.

Oh yes, of course, all crazy conspiracy theories. After all, we are all well aware that the United States has never involved itself with third-party “rendition” seizures.

Nudiefish – Name 1 “third-party “rendition” seizure” where the victim had previously been on the front cover of time?

Or name one where the victim already had an Australian, UK, Swedish and US legal team in place?