Last month measurements of CO2 concentrations over the Arctic topped 400 parts per million (ppm) -- a level not seen for 2.6 million years. Dr Andrew Glikson of ANU's School of Archaeology and Anthropology reports.

You won’t find it in the headlines, but last month measurements of CO2 concentrations over the Arctic topped 400 parts per million (ppm) — a level not seen for 2.6 million years.

Measurements at Hawaii’s long-running Mauna Loa site reached 395.77 ppm. These kinds of numbers have not been seen since the end of the Pliocene period (5.3-2.6 million years ago). 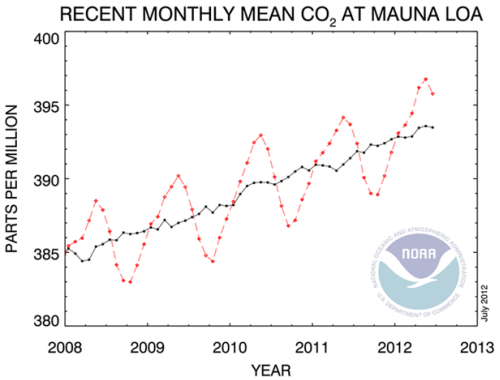 During the Pliocene (5.3-2.6 million years ago), mean global temperatures were 2-3 degrees higher and sea levels 25 metres (plus or minus 12 metres) higher than in the 18th century. Since 1880 the rise in temperature of about 0.8 degrees  is compounded by a further rise of approximately 1.2 degrees, currently masked by emitted industrial sulphur oxide aerosols and sulphuric acid (see Figure 2). 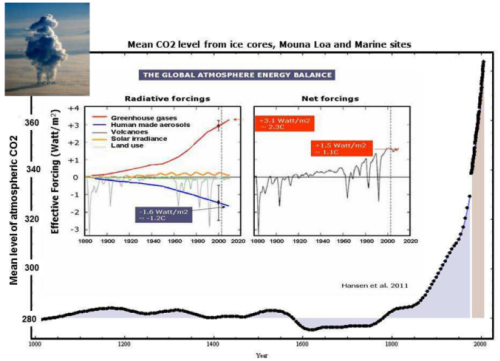 Mean global temperatures have continued to rise (see Figures 3 and 4), notably in polar and sub-polar latitudes, where in May 2012 mean Greenland temperatures reached an all-time high of 24.8 degrees. 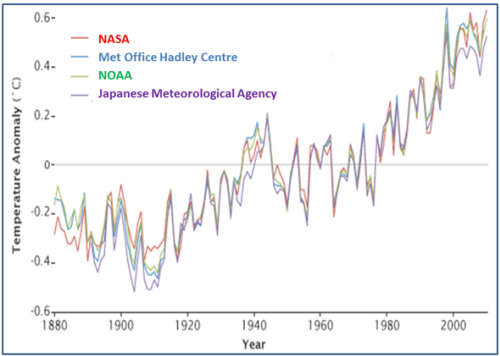 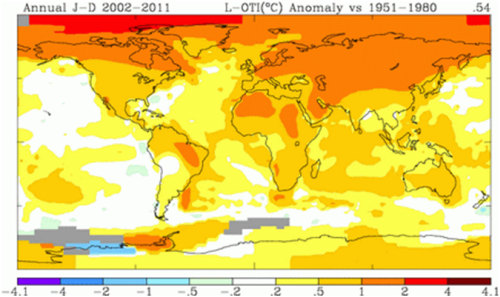 In accord with the basic laws of physics and chemistry of the atmosphere, paleoclimate proxy-based calibrations and direct measurements, the rising levels of greenhouse gases (CO2, methane, ozone) are shifting the energy state (radiative forcing) of the atmosphere beyond that which allowed relatively stable climate conditions in the past 10,000 years, which made possible the development of agriculture and civilisation.

As a result of rising energy levels in the atmosphere-ocean system, the frequency and intensity of heat waves, droughts and floods increased since about 1980, as confirmed by Hadley, NOAA, CSIRO, BOM and other climate research organisations.

Ongoing emissions driving about 2 ppm CO2 per year rise would lead to a level of 576 ppm by the end of this century, well above the  about 500 ppm stability limit of the Antarctic ice sheet. That’s not even considering further rises due to positive feedbacks from ice and permafrost melt, warming water, droughts and fires. In other areas, rising ocean water temperatures intensify the hydrological cycle, leading to the intensification of hurricanes and severe floods.

So what was the climate like during the Pliocene, 5.3-2.6 million years ago, a climate towards which we are now heading with increasing certainty?Research has found that 3 million years ago CO2 levels were about 380 ppm and temperatures about 3.5 degrees warmer than at present. Enhancement of the North Atlantic Thermohaline current, acting as a conveyor belt, resulted in retreat of sea ice, with consequent positive feedback to global warming.

Researchers have also determined that the mid-Pliocene was a period of sustained global warmth as a result of elevated CO2, lowered orography (mountain relief), and vegetation and ice sheet changes. Salzmann, et al, (2009) observe that in the mid-Pliocene, there was a generally warmer and wetter climate, a northward shift of the taiga  (boreal forest, is a biome characterised by coniferous forests) and tundra (sub-polar regions where tree growth is hindered by low temperatures and short growing seasons) — boundary and a spread of tropical savannahs and woodland in Africa and Australia at the expense of deserts.

Estimates of carbon reserves indicate that there are enough coal, oil and gas reserves to emit more than 2000 billion tonnes of carbon and raise CO2 levels above 1000 ppm (Figure 5). Kiehl 2011 states states: 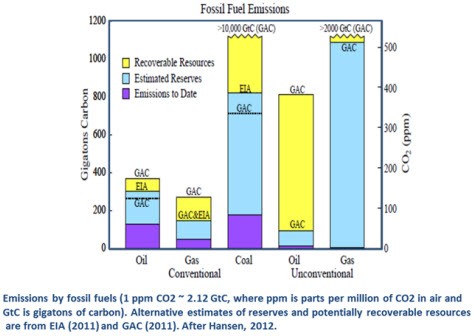 As established by Earth and climate science, planetary climates are determined by factors including solar radiation, greenhouse gases and volcanic activity. Major changes in any one of these parameters leads to transient to long-term shift in the state of the climate.

The increase since the onset of the industrial age in the atmospheric CO2 and methane concentration by more than 40% (from 280 to 400 ppm CO2) poses a major threat to the Earth’s biosphere. According to Hans Joachim Schellnhuber, director of the Potsdam Climate Impacts Institute and climate adviser to the German government, “we’re simply talking about the very life support system of this planet”.

Yeah but Alan Jones says not to worry about it.

All we need is a few volcanoes to start and things will get REALLY interesting.

However both major parties don’t believe in anthropomorphic climate change, so we don’t need to worry.

The other thing I take from this is that all of our necessary efforts at carbon reduction are likely to be too little, too late – and our thoughts and energies need to shift to adaptation soon. And probably sooner than is predictable.

After long standing positions of denial, the head of Exxon and the corporate spruikers at the IPA now appear to accept the science, however say we should just adapt to climate change.

Given the extremes of weather variability seen in the last decade and so far just .8c average temperature increase has contributed to the worst bushfires and the worst floods in Victoria’s history less than 24 months apart. One wonders what +2c (already inevitable) will produce. This year temperature records have been rewritten across the US resulting in failure of crops and accelerated depletion of aquifers. Public opinion has now increased to 70% acceptance of anthropomorphic climate change.

Prevention (or at least reduction) seems much more favourable position to the corporate proposal of adaption which will selfishly wipe out much of the worlds flora and fauna.