In today's Media Briefs: Zoo sorry for refugee competition ... Front Page of the Day ... The Department of Corrections ... How the Aurora Theatre shooting news unfolded on Twitter and more ...

Zoo sorry for refugee competition. Men’s magazine Zoo Weekly has dumped its controversial search for “Australia’s hottest asylum seeker” and agreed to publish an apology in the face of public outrage. A change.org petition calling for Zoo to apologise has attracted more than 5000 signatures since an article by Crikey brought the stunt to national attention. The magazine also received heavy criticism from angry Facebook and Twitter users.

Over the weekend Zoo editor Tim Keen rang Matt Darvas, the Newcastle-based refugee advocate who launched the petition, to personally apologise. Keen said that the apology, to be published in this week’s issue of the magazine, will be made to asylum seekers, their families and Greens senator Sarah Hanson-Young, whose image was Photoshopped onto a bikini-clad model on the mag’s website.

“Zoo is happy to print an apology to those readers who were offended by our take on a very serious topic and to acknowledge that for asylum seekers and refugees, and their families and supporters, it’s a subject too important for jokes.” Keen said it was not his intention to dehumanise or s-xualise vulnerable people. — Matthew Knott (read the full story here)

Sheikh makes a comeback. GetUp! national director Simon Sheikh is making a comeback on Q&A tonight. Sheikh, who had been suffering from the flu, famously collapsed when he last appeared on the show on July 2. A GetUp! spokesman told Crikey that Sheikh was “resting up today” to be fit tonight, although his voice was still a little croaky. “He’s looking forward to getting back on the horse,” the spokesman said.

Sheikh will share the stage with panellists including Christopher Pyne and federal Community Services Minister Julie Collins, who will no doubt be ready to leap to his aid if he runs into any problems, after the criticism Sophie Mirabella copped from some quarters after struggling to assist Sheikh when he collapsed.

Front page of the day. The July 20 massacre by James Holmes in Aurora, Colorado in which 12 people died and 58 were injured, created  headlines around the world. The Denver Post, the major newspaper of Colorado’s capital city, ran a heart-wrenching front page yesterday: 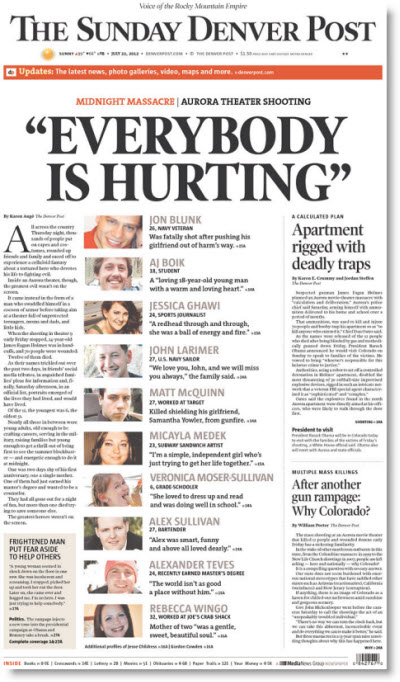 The Department of Corrections. Yesterday’s Sunday Telegraph in Sydney ran this apology to Mamdouh Habib: 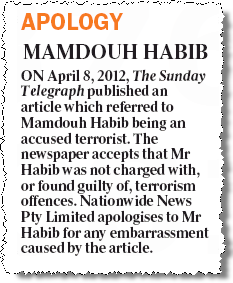 “Here’s how the news spread, including eyewitness reports from people who were at the theatre to see Batman sequel ‘The Dark Knight Rises’ and media who arrived to cover the shooting’s aftermath.” — Poynter

“The mother of a 13-year-old girl killed in a quad bike accident earlier this month has slammed Channel Seven for showing footage of her grieving with her deceased daughter on its website (pictured) before all family members had been told.” — TV Tonight

“When Patrick Wensink was commissioning the cover for his book, Broken Piano For President, he probably wasn’t expecting a cease-and-desist letter from Jack Daniel’s Properties — the owner of the Jack Daniel’s trademarks.” — Mashable

“Alexander Cockburn, a famous leftist writer and journalist, died Friday evening in Germany after going through a two-year battle with cancer that was largely kept a secret.” — The Atlantic Wire

I have enjoyed reading Cockburn’s work for the past decade. I remember when Sarah Palin was first nominated he thought it was a great and brave thing, soon changed his mind though.

Last night I watched a downloaded Game Change about Palin, the film was brilliant but not as good as Hemingway and Gellhorn with Nicole Kidman in one of her best roles since Cold Winter.

That leaves only Patrick to carry on Claude’s mission of sticking it to power. His last article was the the UK First Post last week on Palin sucking the oxygen from the Repug convention to anoint Romney.