BBC nets big Australian windfall. Australia is the BBC’s second biggest export in the world, after the US. The 2011-12 annual review for BBC Worldwide, the international marketing and distribution arm, shows the group boosted revenue from the US by 15.2% to $US500 million and Australia by 8.9% to $A140 million. The US arm includes the BBC America cable channel, which has 77 million subscribers, as well as income from formats and other content (Dancing With The Stars on ABC in the US and The Office with NBC).

The lift in Australian revenue has come from not only Dancing With The Stars, but from sales of content such as The Office, Top Gear, the wildlife stuff on Seven and Nine and the ABC, cooking shows, news and current affairs and countless other programs. The advent of the various digital channels for the five FTA networks has meant a bonanza for the BBC and BBC Worldwide in the past couple of years. The UKTV pay TV channel on Foxtel is another big source of revenue from Australia. During the year the BBC sold its magazine business, which meant the end to the joint venture with ACP Magazines.

But one Australian investment hasn’t paid off. Lonely Planet was bought by BBC Worldwide in 2007 when it purchased a 75% stake for £88.1 million. That was increased to full control in February of 2011 when Tony and Maureen Wheeler, who founded the business in 1973, exercised a put option and sold the last 25% to BBC Worldwide. That took the total value of the investment to £130.2 million. The latest accounts from BBC Worldwide revealed that Lonely Planet is now valued at £85 million after impairment write-downs in 2009-10, 2010-11 and this year.

BBC Worldwide said it been forced to take a £16.1 million “charge to the income statement” in the year to the end of March, which cut the goodwill value of Lonely Planet to just £22.6 million. That was after the £33 million cut in the 2010-11 financial year. It blamed the charge on rising costs caused by the strength of the Australian dollar. Write-downs now total £45.2 million for BBC Worldwide. It paid £42.1 million to the Wheelers (or about $A67 million at the time). On effect that extra investment had been more than wiped out. BBC Worldwide had no option but to buy the remaining 25% as the Wheelers exercised a put option that was part of the original purchase agreement in 2007. — Glenn Dyer 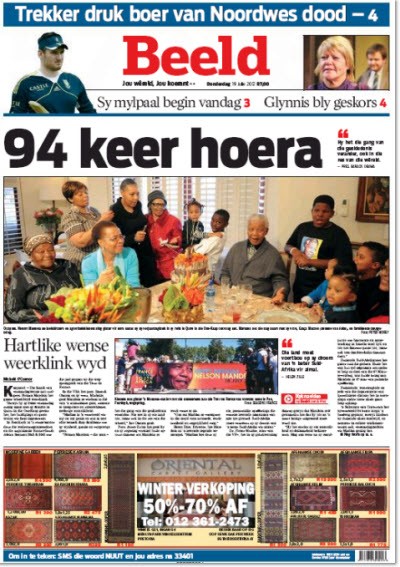 The Department of Corrections. Barry Cohen’s article in The Australian yesterday on asylum seekers opened with this paragraph:

“To anyone seeking to take up the issue of refugees, asylum-seekers, internally displaced persons, returnees, stateless persons et al, I have one word of advice — don’t. You’ll finish up a gibbering idiot trying to understand the myriad sets of figures provided by those trying to solve the problem.”

Today, The Oz ran this correction:

“Major shareholders have renewed their push for media mogul Rupert Murdoch to resign as News Corp chairman at the company’s annual meeting later this year.” — The Guardian

“Just moments after the first court appearance yesterday of Kieran Loveridge, one of the accused’s friends allegedly attacked a cameraman with such force that he fell to the ground, striking his head on the concrete footpath.” — The Australian

“Twitter may have a credibility problem, according to new research results published in the journal Communication Quarterly.” — Poynter