From the Crikey grapevine, the latest tips and rumours … Refugees miss out. Queensland Premier Campbell Newman is tightening the fiscal screws — and it seems refugees are feeling it. A teacher of English to refugees at a Queensland community centre reports that she (and two fellow teachers) will lose their jobs at the centre next […]

Refugees miss out. Queensland Premier Campbell Newman is tightening the fiscal screws — and it seems refugees are feeling it. A teacher of English to refugees at a Queensland community centre reports that she (and two fellow teachers) will lose their jobs at the centre next month due to funding cuts.

The teachers tried to secure some training for their refugee clients, but that company, Help Enterprises, has also lost some funding (as have other community centres). The teacher had this to say:

No training, no job;  no English, no job; stay on a pension, no progress, no hope … I’m wondering why this privileged bunch of well-heeled white people are preening themselves in Parliament while the most needy and vulnerable in our society are cut adrift and thoroughly punished for daring to be poor or ill or black, or homeless or drug addicted … why isn’t anyone talking about these sort of people and people like me who help them? Perhaps nobody cares?

Thin blue line at SBS. Some at SBS are not happy with the single blue line painted around the wall of the meeting room in the Sydney office. This from a mole:

The blue line’s sudden appearance can be attributed to a recent leadership seminar in which the SBS “brains trust” decided it would be a good way to control what staff can and can’t say … if you say something that your manager likes, you’re publicly commended for being above the blue line. But if you say something they don’t like, you’ll be publicly chastised for being below the blue line. Seems this “initiative” is part of the new MD’s cultural regime change dubbed “Culture Club”. Unfortunately it’s left poor SBS staff asking “do you really want to hurt me?”

Other SBS sources are more than happy to walk the blue line. “It’s a temporary and metaphorical reminder for us to be positive, take responsibility and act as one team,” said one insider. “I don’t mind it.”

Family Feud. We all know what it’s like to bicker with one’s nearest and dearest over Christmas dinner, but some families take it to a whole new level.

We’re fascinated by the gathering Rudd-storm, in which Kevin Rudd’s brother Greg, who is making a tilt at the Senate as an independent, is airing his criticisms of his younger brother’s politics and manners. Greg has filled us in via The Age on the fact that he has always disagreed with Kevin on politics, that Kevin’s style has “no longevity” and is “more dictatorial”, and that some within Labor hate Kevin. We knew that already, but it’s interesting to hear it from the man’s big brother.

So here at Crikey we’re compiling a list of Australia’s great Family Feuds, where members of the same party land on different sides of the political fence, preferably accompanied by public fireworks.

We need some more names — so get in touch. Surely there must be some ex-husbands and wives who have tried to wreak vengeance on each other through the ballot box?

Abbott’s crest. Newly anointed Coalition governments have set a trend of overhauling their official crests upon assuming office (think Queensland 2012 and Western Australia 2009), so Crikey is undertaking preparatory work ahead of a possible Abbott victory. We’ve asked our creatively minded readers to come up with some proposals for how Abbott could make his mark on the coat of arms (or perhaps come up with a new crest?).

An early front runner is this effort from Crikey reader “Skink”: 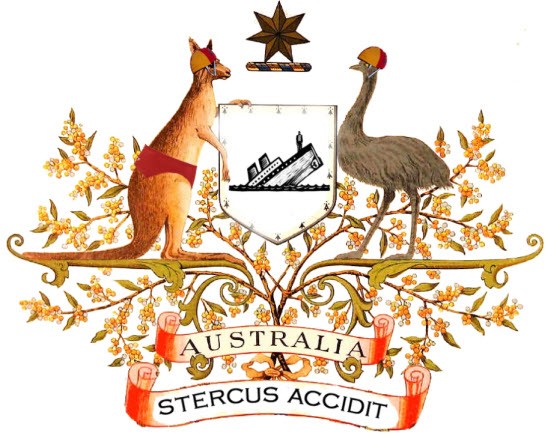 Skink tells us that stercus accidit means “shit happens”. But then Abbott, as a Rhodes scholar who experienced first-hand the dreaming spires of Oxford, would know that already.

Heh, I wrote a blog post about animal totems a few months ago. But my blog crashed. Anyway, I’ll repost it on blogger – logicisstupid.blogspot.com.au

Costello family feud? Rubbish, those two professing Christians (note the
Non-Conformist fingerprints all over the budget surpluses and the Future
Fund) are still quite close even if the former Treasurer has made the common
move back up to Anglicanism – on the way no doubt to atheism….

Re: changies to government ‘branding’ – Howard did the same thing in
2003, instituting rules still in force (http://www.dpmc.gov.au/guidelines/docs/design_guidelines_pmc.pdf)

On the plus side, this got rid of the proliferation of different departmental
logos and letterheads, which can’t have been cheap to maintain. But it was
executed via a very pompous media release, something along the lines of
“After 100 years Australia finally has a government” – suggesting that the
Howard government offered a coherence and unity the other side couldn’t
match. But I recall a Crikey commentator pointing out a similar branding
move by the Whitlam government, promptly overturned by Howard’s old
chum Fraser …

Great work from skink, could be enhanced with the addition of a boatphone?