In today's Media Briefs: Blame shared for Ten's failures ... Front Page of the Day ... The Department of Corrections ... New phone-hacking emails emerge ... Former Murdoch nanny speaks out: 'It was like a war zone' and more ...

Papers cry wolf, but is a challenge on? “Unions shift on Gillard” screams the front-page of The Australian Financial Review this morning. Someone walking past the newsstand would be forgiven for thinking that union leaders were backing away from the Prime Minister en masse in favour of Kevin Rudd (or another Labor leadership aspirant).

But no — as the story itself makes clear, this hasn’t happened at all. Last week, several union leaders — including Joe de Bruyn, Michael O’Connor, Tony Sheldon and Charlie Donnelly — got together for a meeting. The topic of federal Labor’s fortunes was raised. De Bruyn, O’Connor, Sheldon and Donnelly all re-affirmed their support for Gillard — although two said there is a “real prospect” she may be replaced. In other words, they stated the bleeding obvious — as Joel Fitzgibbon did on Q&A on Monday when he said that political leaders who are unpopular are unlikely to survive for long.

The Fin’s yarn followed a curious piece yesterday by The Sydney Morning Herald’s Lenore Taylor — a well-connected press gallery veteran who usually prefers policy analysis over political manoeuvrings. Her story, headlined “Gillard stuck in rut as Rudd battle looms large again”, stated: “Labor sources say Kevin Rudd’s support has grown significantly since he won only 31 of the 102 caucus votes when he challenged Julia Gillard in February, and it will increase further if Labor’s primary vote remains stuck in the low 30 per cent range recorded in most published polls.”

On Monday, in a lengthy feature, The Australian’s Peter Van Onselen described the Gillard-Rudd showdown as “increasingly inevitable”. So when will it occur? Perhaps next month, Van Onselen suggests. Or maybe the final sitting weeks of parliament in late November. Van Onselen’s piece did contain one eye-catching detail: that union boss Paul Howes and ALP secretary Sam Dastiyari are no longer actively supporting Gillard. Given PVO is close mates with Howes, this is a significant claim.

But the key question remains. Is a challenge on? Is anything actually happening? Gillard may well step down — or be rolled — before the next election. But all available evidence suggests the latest round of leadership speculation is just that: speculation. — Matthew Knott

Quote scandal in US media. So much for those paragons of journalism in the US. A story in The Guardian exposes the hypocrisy of much of the US media, especially giants like The New York Times:

“News organisations in the US are reviewing their policies on quote approval after The New York Times blew the whistle on the draconian methods deployed by campaign officials to control their media messages.

“The New York Times and the LA Times have confirmed to The Guardian that they are reviewing the practice of allowing reporters to submit quotes for approval by the Obama and Romney camps before publication.

“Reuters said it opposed the “wholly unacceptable” practice, as did the Associated Press. Web publisher Buzzfeed said it tried to avoid it, and RealClearPolitics said it was discussing the issue with staff.

“The pushback on quote approval followed a front-page article in Monday’s New York Times, revealing that the Obama and Romney campaigns frequently insist on reading and redacting quotes given by interviewees before permission is given to publish.

“The Times article said reporters were being granted interviews with officials from the Obama campaign ‘under one major condition: the press office has veto power over what statements can be quoted and attributed by name’. The report added that Romney advisers ‘almost always require that reporters ask them for the green light on anything from a conversation that they would like to include in an article’.

“In the article, the Times‘s managing editor for news, Dean Baquet, said he disliked quote approval. ‘We encourage our reporters to push back. Unfortunately, this practice is becoming increasingly common, and maybe we have to push back harder,’ he said. A spokesman confirmed on Tuesday that a review was under way.”

Why didn’t the papers simply refuse in the first place and write a story about the attempt to control the news? So much for the freedom of the press. The report points out that it is now a new problem and has been around for years. We should make sure that doesn’t happen here next year. — Glenn Dyer

Blame shared for Ten’s failures. In a mostly solid critique of the Ten’s Network’s slide into TV grubbiness, Sydney Morning Herald columnist Paul Sheehan missed the real culprit. At the end of the column in the paper this morning he wrote:

“The person technically responsible for what is evolving at Ten Network is the managing director, James Warburton, but he joined the company only in January (from Seven) when all the current trends were already in place or in the pipeline. So the primary responsibility would flow to Ten’s chief programming officer, David Mott, who has been in charge of the network’s programming for 15 years.”

Well The Shire, which debuted on Tuesday night, was commissioned by Mott, but it was a call supported by his boss, James Warburton. Being Lara Bingle (Tuesdays at 8pm) is a different story: it was commissioned in 2011, before  Warburton started at Ten in January. Mott played a key role, but the executive signing off on that would have been Lachlan Murdoch, the then interim CEO of Ten.

And, under changes introduced last year, the Ten board became more involved because Mott and management had their freedom to commission new shows restricted (after the multimillion dollar mistake called The Renovators) with board approval needed for much of the spending. The Ten board contains Murdoch and Gina Rinehart, plus representatives for Bruce Gordon and James Packer. That means Mott, Warburton, Murdoch and the Ten board are responsible for The Shire and Bingle and other new programming that has appeared on Ten this year. Jack Cowin, a friend of Rinehart, is also a board member. Fairfax directors should tremble at that thought and wonder if there is any synergy between The Shire and The Sydney Morning Herald?

Murdoch is chairman of Ten. He was interim CEO for all of 2011 after driving the ousting of previous management and board members and cutting costs and changing the way the TV programmers reported to the board. Sheehan should have joined a few more dots and sheeted the blame home to the Ten board — especially Murdoch and Warburton — and given Rinehart and Cowin (who is her mouthpiece when it comes to pressuring Fairfax) a touch up as well.

In the end, making TV programs involves spending money, and those who sign off on the investments are the CEO and the board. You can’t just lump all the blame on Mott and his programmers. — Glenn Dyer

Front page of the day. The UK’s The Times runs a powerful front page today on the escalating conflict in Syria: 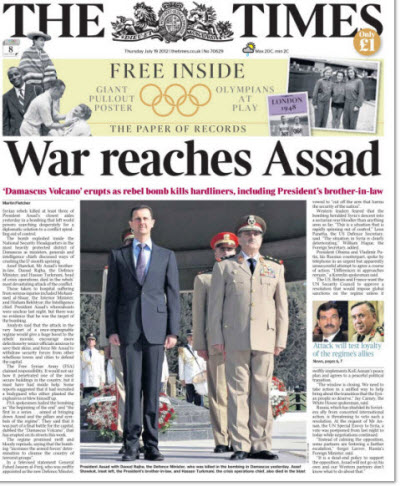 The Department of Corrections. India sure does loves its cricket. So much so that today’s Hindustan Times ran a correction on much loved batsman Virat Kohli: 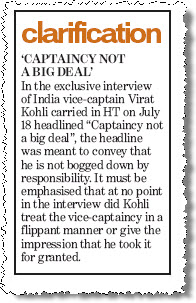 “The existence of an email of ‘enormous significance’ written by a News International (NI) executive that refers to the phone hacking of a ‘well-known individual’ has emerged in the high court, in a hearing to discuss the progress of civil claims against the publisher of the News of the World.” — The Guardian

Former Murdoch nanny speaks out: ‘it was like a war zone’

“A former household staffer and tutor for Rupert Murdoch and Wendi Deng’s children is speaking out for the first time about the relentless nightmare that is working for the Murdochs.” — Gawker

“To help protect dissidents using video to tell their stories in countries with repressive government regimes, YouTube made available a new tool on Wednesday allowing people to obscure faces within videos uploaded onto its platform.” — The New York Times

“Mexico’s special prosecutor for crimes against journalists says 67 journalists have been killed and 14 have disappeared in the country since 2006.” — Huffington Post

Apropos item 1 – is a challenge on?

Surely the prospect of caucus changing direction in such a significant way makes the lot of them seem even less fit to govern? What a mess. Can anyone or anything save Labor from years in opposition?

Re the former Murd0ch nanny – the allegations come as no shock.