Triumph and pride. These are the universal gestures we will see as the Olympic games unfold. The two are not the same thing but here's a guide how to recognise them.

Budget cutting nonsense. The trumped-up indignation federal Liberals have discovered about cuts to defence spending would be funny if it was not for the likely prospect that they will soon be in government.

On the one hand they promise to produce what they call a fair dinkum national debt reducing budget surplus without explaining where any cuts will come from and then they promise to increase spending on one of the major components. They are a joke.

The casual look continues. I have remarked before on the trend by politicians away from the suit and tie to the open neck shirt but now Barack Obama has moved even closer to the John Howard tracksuit look — at least when it comes to footwear. With Tony Abbott so at home in both Speedos and lycra, getting the right casual look must be a challenge for Prime Minister Julia Gillard.

I am no expert in sartorial matters and, without an opinion poll to guide me — see the next snippet for an explanation of this reference — can give no guidance to her. Perhaps a reader or two can help. Suggestions please. 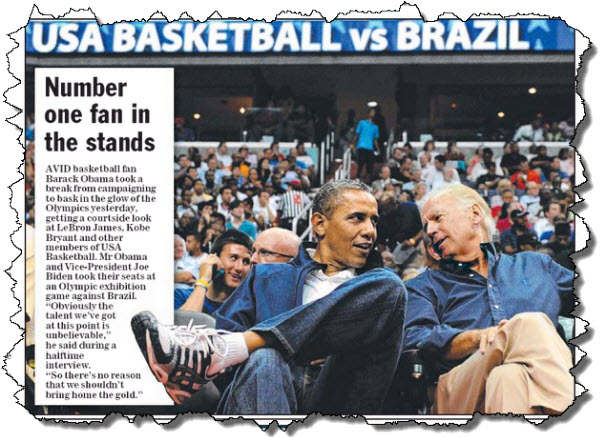 Revealing trade secrets. Washington Post columnist and blogger Ezra Klein has done a great disservice to his fellow political pundits. He has gone and published an accurate guide to how to pontificate on subjects you actually know little or nothing about. All that’s required to use this tool is an up to date set of opinion polls.

A guide for Olympic television watching. Triumph and pride. These are the universal gestures we will see as the Olympic games unfold. The two are not the same thing but here’s a guide how to recognise them.

David Matsumoto, professor of psychology at San Francisco State University, challenges previous research that labelled Olympic athletes throwing up their arms, clenching their fists and grimacing after a win as signs of pride. Displays of triumph, he argues, include different behaviors to those of pride and occur more immediately after a victory or win. 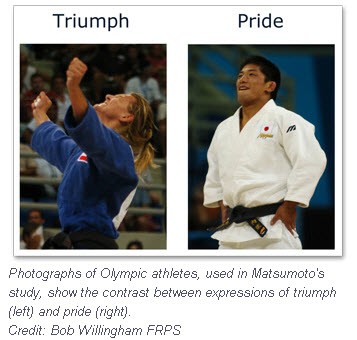 His findings, due to be published in the journal Evolution and Human Behavior, are that “triumph has its own signature expression that is immediate, automatic and universal across cultures.”

“One of the biggest differences between triumph and pride can be seen in the face. When someone feels triumphant after a contest or challenge, their face can look quite aggressive. It’s like Michael Phelps’ reaction after winning the 2008 Olympics. It looks quite different to the small smile we see when someone is showing pride.”

Participants in the Matsumoto study were shown photographs of judo competitors from 17 countries, who had just won a medal match at the 2004 Olympic Games, and were asked to judge the emotion portrayed by choosing an emotion from a list. The study included participants from two different cultures: the United States and South Korea. Separate research has found that South Korean culture is more hierarchical than the U.S., values collectivism more than individual achievement and rights and includes social rules that downplay displays of emotion.

Across multiple studies, the observers consistently chose the same expressions as representations of triumph. In the photographs labeled triumph, athletes raised their arms above the shoulders, clenched their fists and their faces showed grimaces or mouths yelling. In the photographs labeled pride, athletes held their arms out from their body with their hands open, tilted their head back and their face showed a small smile.

“Watch that immediate reaction in the first few seconds after an athlete has won their medal match — no matter what the sport is — and you’ll see this triumph response from athletes all around the world, regardless of culture,” Matsumoto said.

The study suggests that displays of triumph may have an important role in evolution, perhaps by helping individuals signal status and dominance in early human societies.

Ranking countries according to their respect for the rule of law

Obama a boon for Gillard

The Jacket Obama is wearing is an Underarmour Jacket.
This brand is the coolest new brand in the USA
My wife purcases pieces for me on the net. The most comfortable
clothing that I own.