From the Crikey grapevine, the latest tips and rumours … BHP titbits. Our tipsters are coming forward with more interesting claims of the apparently control-freakish behaviour of CEO Marius Kloppers, sparked by an internal BHP memo leaked to The Australian Financial Review. It’s a well known fact that BHP IT are as paranoid as all […]

BHP titbits. Our tipsters are coming forward with more interesting claims of the apparently control-freakish behaviour of CEO Marius Kloppers, sparked by an internal BHP memo leaked to The Australian Financial Review.

It’s a well known fact that BHP IT are as paranoid as all hell to the point of intransigence that would make Sir Humphrey weep with joy. They routinely point blank refuse contractors access to their IT network to perform everything from simple data entry to deploying any form of “smart monitoring device” which could save them untold tens of millions in downtime and man hours for fear of compromise. It doesn’t matter that Rio don’t seem to have a real problem with third parties, or Xstrata, Or Centennial, Or Anglo. Or just about anyone else really. As long as you don’t abuse the network nobody else seems to give a hoot. But BHP act like you’re guilty first so therefore access is denied, unless someone really high up has some pull. Word is that the next round of laptops will have zero USB ports …

And it seems that Kloppers is not above taking direct action if staff don’t follow his instructions. This is from another source:

This story known to many in the shipping industry — when Kloppers was head of BHP-Billiton trading and transport in The Hague he issued a diktat that all desks should be left clear after work — files, papers and other work-in-progress were to be put away. The consequence of ignoring this instruction was to have one’s files swept off the desk and into the cleaner’s bin, should Marius come checking after hours. Worse than junior boarding school …

If Kloppers would like to set the record straight, we’re more than happy to offer him a right of reply. He can drop us a line here. And so can anyone else with more tales from the BHP bunker.

SackWatch: With almost 40,000 jobs to be cut from the federal and state public service, we’ve heard quite a few anecdotes of how the departures are being handled around the country. This tip from Queensland hits a new low:

So is it standard practice to hear you’re losing your job by being CC’d into emails? Let us know.

Dynastic debate. A letter from more than 200 academics opposing off-shore processing of asylum seekers has been signed by, among others, Azadeh Dastyari, Sam Dastyari’s sister. One wonders how Sam feels about his sister’s support for the “extreme Greens'” policy?

Dastyari dismissed the observation as “ridiculous” this morning. “Azadeh is a Fulbright scholar and is more than capable of making up her own mind on whatever issue she wants,” he said.

Order in the House! The PM is attempting to crowdsource strong questions from the public for her Google+ “Hang Out” this weekend. It’s billed as “Question Time for laypeople” … but Julia Gillard may not have had in mind this pithy question on her Facebook page yesterday: 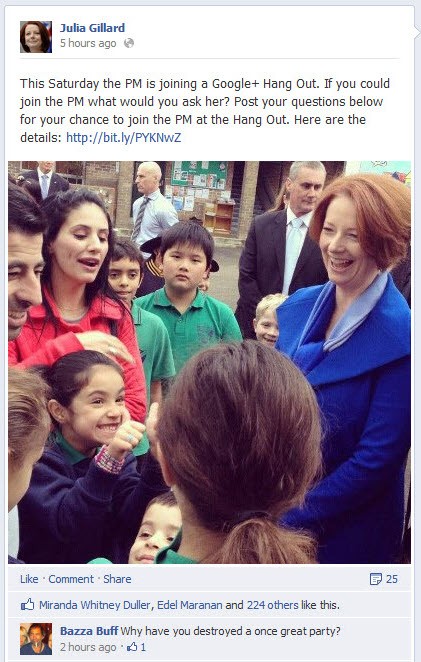 And she may not be too delighted with the question currently leading the pack with almost 7000 popular votes (this one has been promoted by Andrew Bolt):

Chicken indeed. This pic comes to us courtesy of reddit after Carlton’s Chris Judd ran into trouble for his “chicken wing” tackle on North Melbourne’s Leigh Adams. He’s no doubt brooding on the AFL Tribunal’s decision to suspend him for four matches. 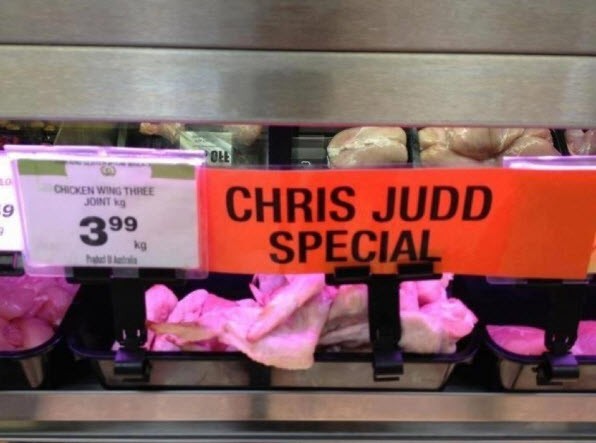 Way out West. Crikey’s tip that the Queensland government has dumped its modernistic logo for the old-school regal crest elicited a surprisingly fulsome response from readers. One has pointed out that the WA Liberal government did the same thing, with Colin Barnett issuing a strict 2009 edict banning the “common badge” and replacing it with the coat of arms. If anyone has further questions, they can race to WA’s Common Badging Committee which, we can only imagine, is not terribly busy.

Barnett’s choice to replace it: 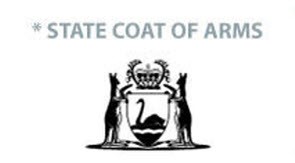 Our WA tipster lamented the change, noting that the globe logo “was supposed to show WA directed towards Asia, which Barnett is always talking about now”.

Given the tendency of Coalition governments to replace official logos when they take office, Crikey wonders what Tony Abbott might do if and when he wins government federally. Of course, the Australian logo is already an old-school regal crest — but Abbott might like to put his personal stamp on it, encapsulating his personality, values and policies.

USB ports are so yesterday. Give me NFC, or Thunderbolt instead…

When are you going to tell Tony that his head start ends? I figure you can probably do another six months and still win…

I am enjoying the commentary about State Arms vs. commercial-style ‘logos’ of the last few days, but please, M/s tips and rumours editor, can you make some effort to use the right terminology.
There is no such thing as a regal style crest, old school or otherwise. The Beattie burger, the WA globe (with WA taking over the world – a remarkably prescient image of the state’s big miners today) , NSW’s Nathan’s Thistle, and so on, are at best corporate emblems. They are not really true logos (i.e. a graphic design focussed on a letter or word), even though every-day English usage of the word now seems to have become as meaningless as most ‘logos’.
The coats of arms they replaced are certainly not logos. They are coats of arms. They are not crest – a crest is just one element of a coat of arms. They are formally assigned by the Crown for use by the state, and are intended to endure for as long as the state – or at least, for much longer than the term of any partisan government.
Also, the statement that Coalition governments have a tendency to replace official logos could only be made with a very short memory. Generally, ALP governments of the 1980s/90s replaced state coats of arms with commercial-style emblems, and recent moves to reinstate official coats of arms in WA and Queensland are simply a return to the status quo, not an allergic reaction by new conservative governments to the enlightened aesthetic values of fallen Labor governments. In fact, the NSW Labor government in 2006 made a brief return to using the NSW coat of arms before the forces of ALP Pty Ltd once again asserted itself with the Nathan’s Thistle ‘logo’ – a Bangkok-esque parody that the present conservative NSW government has for reasons unknown chosen to retain.
The emblem currently used by the ALP Federal government is a version of the Commonwealth’s own coat of arms that was adopted in a branding strategy by the former conservative Howard government. It was retained by both the Rudd and Gillard governments, and there seems little reason for an Abbott government to do otherwise (but whether reason will play any part in a future decision on the matter remains to be seen).
The facts will not support an attempt to equate ‘old school’ state coats of arms with conservative governments and ‘modernistic logos’ (whatever they are) with ALP governments. Using the correct terminology helps cut through this false dichotomy.
Whether the variety of heraldic beasts used in official coats of arms also have culinary value is, of course, an entirely different question!

Andrew Bolt has been asking his question for years to befuddle those who believe we should be taking action to address Climate Change. It’s like me asking the Tax Office how much difference my contribution makes to keeping inflation or interest rates under control. Maybe one counter is to actually answer the question.

The answer is zero. Carbon Pricing won’t reduce temperatures; it can’t and is not intended to. However, it is the start of Australia’s contribution to worldwide efforts to prevent global average temperatures rising to dangerous levels.

So what’s Australia’s contribution? Supposing effective measures are taken globally (a big supposition) and the global average temperature rises by only 1.5 degrees by the end of the century, instead the expected (‘business as usual’) rise of about 3.5 degrees. All of these measures will have prevented a rise of two degrees. Australia’s share would be in proportion to our share of global anthropogenic carbon emissions, i.e. about 1.5%. In this we punch above our weight by a factor of about 5. So, one could tell Andrew Australia’s contribution would be about 0.03 degrees. The US contribution would be about 0.4 degrees, and so on.

Of course, this analysis doesn’t mean that much other than that Australia needs to make a proportionate contribution to addressing a serious global problem. Conservatives don’t seem to have a problem with this when it comes to war. But maybe we could stump Andrew if we actually answer his question and ask him to disprove it (yes I know, probably not).

@Bruce: re coat of arms. How long before the states sell the rights to them to corporations? Its being done for stadia. Why not the Etihad Territory? Telstraland?