Sun Shines on Shire publicity. Wondered why News Limited tabloids, led by the Sydney Daily Telegraph, have been whipping up a “controversy” about just where some of the cast of the Ten Network’s new program The Shire hail from?

You have to remember the real cast in this story: the Murdoch family. The Tele is of course owned by News Limited, which is owned by News Corporation, which is controlled by the Murdoch family. The Ten Network is 10% owned by Lachlan Murdoch, who is chairman of the network’s parent company. And The Shire is being produced by the Shine group, which used to be controlled by sister Elisabeth, before she sold it to News Corp in February of this year and pocketed $US248 million. Shine also produces MasterChef for Ten, and a couple of other series either broadcast (remember the disaster known as The Renovators last year; that was a Shine production) or about to appear on air.

So when you read any sort of story in a News Ltd tabloid while The Shire is on air (and MasterChef as well) remember it isn’t news, it’s publicity from the Murdoch family’s in-house PR outlets.

For example, you would be hard pressed to find any honest appraisal of The Shire as TV content, or the fact the program suffered a massive 32% turnoff over the half hour as the core audience abandoned it for what was on Seven, Nine and the ABC. The current run of stories is solely aimed at getting people to remember to tune back in next Monday night. Watch for a story or two in the Saturday editions of the tabloids and in the Sunday stablemates. — Glenn Dyer

Deja vu for ABC designers. Is this a record? On Monday ABC1 showed a repeat of a Grand Designs episode called “Oxford” at 6.05pm. Yesterday, ABC1 showed the same episode at 1pm — in other words a repeat was repeated, and then repeated. — Glenn Dyer

Front page of the day. Today’s influential Financial Times lead with US Federal Reserve chairman Ben Bernanke’s view that the Libor — the “leading benchmark for mortgages, derivatives and corporate lending around the world” and currently under exhaustive scrutiny — is flawed: 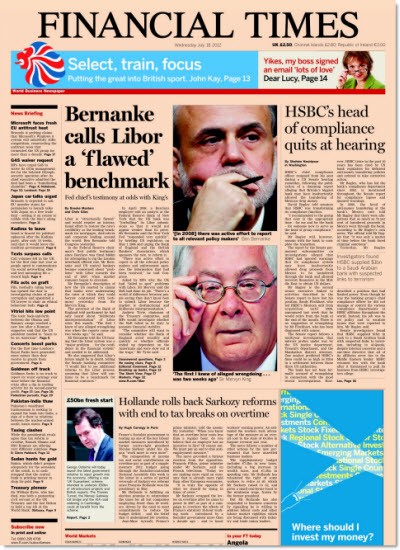 “The Guardian and The Observer lost £44.2m last year as investment in digital publishing — including iPad, Facebook and Android apps — contributed to a deepening of losses at the national newspapers that could not be offset by double-digit growth in digital revenues.” — The Guardian

Seven not out of NRL race

“Seven is putting out noises that it is still keen for the NRL rights, but not at any price. It follows Seven West Media raising $440m amid an advertising downturn.” — TV Tonight

The 40 best blogs for journalism students

“Because journalism as a whole constantly ebbs and flows along with the currents of new technologies, students hoping to graduate and enter into the industry need to understand how its myriad facets change over time.” — Online Education Database

“Facebook today saw a drop in two main metrics of popularity: number of friends and likability, which presents a particular problem for the social network because popularity is what it sells.” — The Atlantic Wire

Election IOU: how will Rupert call in Abbott’s debt to him?

Why are they pronouncing Shire to rhyme with dire, rather than dear?

@mike Smith: that answers itself, really.

Glenn Dyer is right- the ABC is clogged with cheap reality/celebrity TV imports, repeated…So is SBS.

Not to mention local variants, like the teeth ‘n tonsils flop “Randling”.

If you laid the 6 million episodes of “Grand Designs” end to end, Britain would be covered in steel and concrete self-indulgence, painted green.