Ford is paying the price for gambling on high greenhouse gas emissions and low oil prices with their dependence on making large cars in Australia, writes Tristan Edis of Climate Spectator.

Ford’s Australian production line is a train wreck in slow motion, with government complicit in the fiasco.

Yesterday the global car maker announced 440 people, primarily from its manufacturing operations in Melbourne and Geelong, will lose their jobs. Ford says the closures are a direct response to changing customer preferences, which have driven a continued industry-wide decline in the sale of large vehicles.

As Climate Spectator reported in March, a neighbour of mine, a former design engineer at Ford, related a sad story to me that illustrates this point. The Ford Australia president at the time addressed the staff a few years ago to announce that the company was in financial stress. High oil prices had led buyers to turn away from the Australian-made cars in favour of more fuel-efficient imported alternatives.

At this point a frustrated engineer pointed out to the CEO that “blind Freddy” could have seen this coming many years previously. He lamented to the CEO that over that period they had engine design and development equipment sitting idle. This could have been used to develop a highly fuel-efficient diesel or smaller capacity turbo-petrol engine — and ensured the ongoing viability of the Australian car.

As the chart below illustrates, out of the top 15 motor vehicle suppliers to the Australian market in 2010, Ford had the worst CO2 emissions and fuel economy, due largely to its heavy dependence on the thirsty Falcon and Territory. 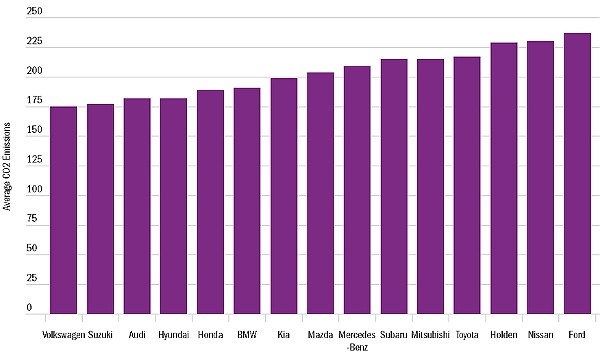 The thing is that even back in 2002 and 2003, when I was working on fuel economy issues in the government’s Greenhouse Office, it was plainly evident that Ford’s domestic manufacturing was incredibly vulnerable to rises in oil prices. And in 2005 and 2006, with a spike in oil prices, this vulnerability was thoroughly exposed.

Yet the company took until 2011 to integrate a diesel engine into its Territory (which now comfortably outsells the thirsty petrol six), and only just introduced a more economical four-cylinder alternative for the Falcon in April this year.

A large part of this sluggishness comes down to the fact that Detroit ultimately calls the shots and hasn’t been all that interested in allowing its Australian subsidiary to address its fuel economy vulnerability. Unless, of course, Australian governments cough up the money to pay for it.

But it’s also been a product of governments’ unwillingness to take the tough decisions that would have forced Ford to lift its game.

Current and past Commonwealth governments have dragged their feet on motor vehicle fuel economy standards, and we lag the rest of the developed world and even some developing countries. In addition, fleet buyers, particularly government fleets, have been happy to spend other people’s money pursuing their Peter Brock and Dick Johnson delusions, instead of buying cheaper and more economical vehicles.

One in three Australian-made cars are sold to government fleets, and these public servants like to furnish themselves with cars capable of acceleration times that not that all that long ago would have rivalled a Porsche (the Ford Falcon accelerates from zero to 100km/h in 6.9 seconds).

I had to deal with this mentality first-hand when, for my past sins, I was assigned the job of improving the Commonwealth government fleet’s fuel economy. In a process reminiscent of Yes, Minister, senior public servants progressively watered down a pronouncement by John Howard to improve the fuel economy of the Commonwealth fleet so that it didn’t affect their own company cars, and also provided an extensive range of other carve-outs. At best it would add slightly more Mitsubishi Magnas and Toyota Camrys and slightly fewer Falcons and Commodores.

It was a joke by any measure, yet the resistance to even this was extraordinary. I was told by fleet administrators that the target was not able to be implemented as there would be incredible resentment at having to drive — shock, horror — four-cylinder vehicles. One person said to me that until Peter Brock started driving a Camry she would be unable to follow-through on our requirement.

The cars affected weren’t part of any remuneration package. They were pool vehicles to be used solely for work purposes during working hours.

*This story was first published in Climate Spectator

The only way to save the car industry? Crack down on emissions

Who’s afraid of Ford’s closure? It was logical and no bad thing

Ford closure is overdue and irrelevant to Australian manufacturing

I can distinctly recall a couple of years ago Ford said it would start making the Focus here but that idea seems to have disappeared. Has anyone asked Ford why?

Honestly, if this is one of the companies, through their choice of models, doing the most damage to our planet through inefficient high carbon emitting engines then, even though on a human level I feel sorry for those losing their jobs, this is not a bad thing.
The move to lower polluting and even zero emission electric cars ( running on greenpower of course ) is in full swing, apart from the obvious bumps along the way ( SUV proliferation anyone ), and companies that ignore this or are slow to come on board do so at their peril ( and their shareholders ). The most obvious thing that could be done would be some kind of rebate on low emissions cars to encourage consumers through lower prices, however knowing the track record of this country I find that highly unlikely right now. This would be one obvious way that the government should be spending money collected from the carbon tax. Of course that money is really being used to buy voters off and shield them from any financial pain, however that is another story….

If Ford is sacking 440 workers, does this mean that the Australian government can ask for the $100+ million bailout money back? Isn’t that why the money was provided in the first place, to prevent exactly this kind of thing happening?

Andrew (the real one?)

From the graph it appears that Ford has 10% more CO2 emissions than Toyota. Maybe they canned the Focus because they thought the would not be able to compete with all the other imported small cars.
I think they should make a small car that is very unique in design. Many people like buying something different than the average and it opens up an export market.
Also a lot of folk think they save money on fuel costs but don’t factor in depreciation of a new car let alone the CO2 contribution of producing a new car.

I’m more curious why Ford cars are such rubbish – I’m now on my fourth Ford since the middle of April – each change because the vehicle was so awful, and now I have gone from a Territory to Falcon. Nothing wrong with it, but that’s about the nicest thing I could say. Ford doesn’t deserve to survive, but what about the unemployed/unemployable (because of untransferable skills) that would create out of committed hard working people let down by a corporation so remote from the customers? Are GM vehicles the same?