Fitzgibbon flies in out of nowhere to get the press

No surprise that Joel Fitzgibbon hits our media coverage chart from out of the blue this week.

No surprise that Joel Fitzgibbon, Labor’s chief numbers man in Parliament and key member of the party’s New South Wales right, hits our media coverage chart from out of the blue this week. Previously linked to a campaign to reinstate Kevin Rudd as prime minister, Fitzgibbon kicked off another round of leadership speculation by his statement on ABC TV’s Q&A that unpopular leaders are eventually replaced.

This kept K-Rudd in our Top 5 without saying boo (except of course for the regulation tweets), while PM Gillard’s monotonal rebuttals see her safely back into top spot. Indeed her coverage levels this week are streaks ahead of her regular rival here, Opposition Leader Tony Abbott, who is gagged from bagging the carbon tax by being overseas.

Not so Shadow Treasurer Joe Hockey who entered the fray arguing that putting the GST on a carbon tax is inefficient and a throwback to an era of taxes on taxes, a policy defended by Federal Environment Minister Tony Burke, who also garnered coverage saying the federal government would assist the WA government as it reassessed population numbers of the protected great white shark following the fatal attack north of Perth last Saturday. 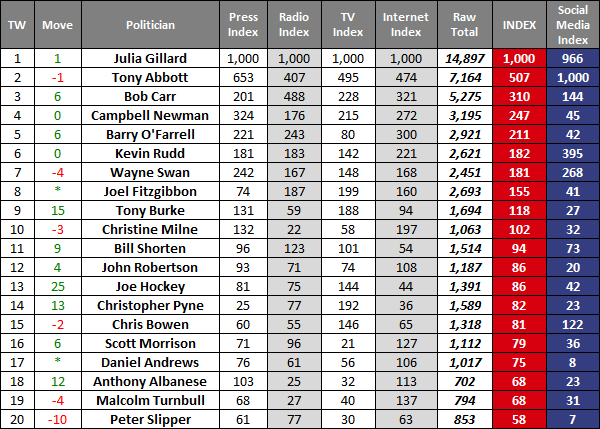 Regulation social media rankings this week, which reflect the fact that K-Rudd’s Twitter output matches his status as the most followed Australian politician.

There’s no doubting this kid knows how to chart. His social media ranking is off the Richter scale, making beliebers of us all.