The cuts to the government's military expenditure have been attacked by a key lobbyist for firms that benefit from it.

Consider yourselves told: storied Republican hawk Richard Armitage says the Gillard government’s cuts to defence spending are intolerable and we’re being a free rider on the US. His remarks come a few days after the new head of the US Pacific Command also expressed disappointment at our level of military spending.

Being Armitage, his remarks were immediately relayed by his good friend Greg Sheridan, whose bromance with Armitage has filled many an Australian column over the years. Despite Sheridan claiming an “exclusive” — a word that appears to be losing all meaning in the Australian media — Peter Hartcher also conveyed them for Fairfax.

Armitage had expressed his views at the traditional Americaphile circle jerk, the Australian American Leadership Dialogue, where Labor Right figures get to pay the sort of homage they can’t manage in “protected source” meetings with US diplomats here.

But who, exactly, is Richard Armitage? Well, there’s the before-Iran-Contra Armitage, and the after- version. The younger Armitage fought in Vietnam and worked in undercover US operations there and other south-east Asian countries and, later, pre-revolutionary Iran, often involving the funnelling of money. He began his transformation from covert money man to the more distinguished role of foreign policy adviser in the Reagan years, but couldn’t help himself and wound up entangled in the Iran-Contra saga. The final report of the investigation into the scandal concluded Armitage gave false testimony to investigators.

After that, Armitage began his transformation into a sort of Republican foreign policy eminence grise — to the extent a bald man can be — specialising in the Asia-Pacific, with an outspokenness that made him beloved of local media — not just the fawning likes of Sheridan, but the ABC, which has frequently given him a platform. He even got a gong from our government in 2010. Under George W. Bush, he became deputy secretary of state, though his main claim to fame during the Dubya years was as the leaker of Valerie Plame’s identity.

After following Colin Powell out the door from state, Armitage followed the well-worn path into the private sector, setting up his own Washington consultancy and taking board appointments. That’s where his comments about Australian defence spending get interesting.

The primary victim of the Gillard government’s cuts to defence spending announced earlier this year were US corporations. In fact the bulk of our major defence procurement projects go to US firms. In 2010-11, according to the Defence Materiel Organisation’s annual report, of the procurement projects worth more than $1 billion, just over 55% of value was going to US firms, or partnerships with a dominant US presence, often under the Foreign Military Sales arrangement between Australian and the US.

Of the large projects cut or delayed, US firm Raytheon, in alliance with a South Korean company, was well placed to win the cancelled self-propelled howitzer contract. And, in particular, the delay in the Joint Strike Fighter hit Lockheed Martin. Australia isn’t the only country cutting defence spending, of course: austerity is seeing military budgets around the developed world slashed, including in the US, which is cutting defence spending by nearly half a trillion dollars over the next decade, and that faces an automatic “fiscal cliff” cut of an additional $55 billion if Congress can’t resolve its budget gridlock by the end of the year. Late last year, US Defence Secretary Leon Panetta warned that the Joint Strike Fighter was one of the projects endangered by military spending cuts.

In these tough times for military contractors, every cut hurts. Fortunately, they employ skilled lobbyists to make their case for additional expenditure. Lobbyists like … Richard Armitage. Armitage has three separate roles in spruiking for US defence contractors. His own firm, Armitage International, is a lobbyist and consulting firm specialising in “international business development in industries such as aerospace, communications, consumer products, construction, defence, finance and financial services, high-technology electronics, information technology, and transportation.”

Armitage is also on the board of giant US national security contractor ManTech International, which has extensive US defence contracts in the Middle East and Afghanistan. And Armitage is also on the board of advisers of DC Capital Partners, an investment firm that specialises in investing in companies working in “intelligence, homeland security, information technology, and operations and maintenance”. Its board of advisers is composed entirely of former senior military or national security figures.

Hartcher mentioned Armitage’s board position at energy giant Conoco but not his more direct interest in defence spending. Sheridan skipped the matter entirely. But it’s no wonder Richard Armitage is aggrieved at the Australian government’s curbs on defence spending.

Defence spending: the most expensive ‘free ride’ in history 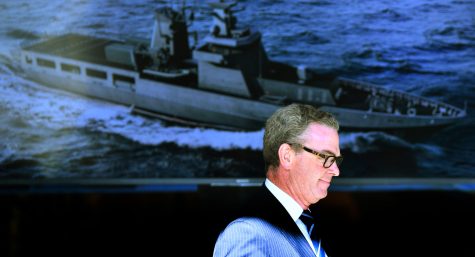 And that poor excuse for a wise and humble leader, Tony Abbot agreed with this person and berated Labor for
cutting defence spending.
He obviously forgot that Senator Robert Hill (Howard Govt) spent $550 million on ABRAMS TANKS, worthless to us because THEY ARE TOO HEAVY AND TOO LARGE TO CROSS MOST OF AUSTRALIA’S BRIDGES!!! that are too big consequently rendering them useless….perhaps Mr Abbot can return them and get our money back, so Labor can use that $550 million for something that may be able to defend us??? Check the web friends and you will find this:

The project cost is about $550 million.

The Abrams tanks are significantly more capable than the current tank and will contribute to the Army becoming more lethal in future close combat.

The Government accepted Defence’s advice that the Abrams is the best capability and the best value for money with the lowest risk of the three replacement tank options examined.

Senator Hill said the new tanks would be introduced into service from 2007 and would be based with 1st Brigade in the Northern Territory.

“The tanks will be used by the Army to provide increased firepower, mobility and survivability for our soldiers on the battlefield,” Senator Hill said.

“They will also improve the Army’s network centric warfare capability, supporting the development of a networked combined arms approach to operations – where armour, infantry, artillery, aviation and engineers work together to support and protect each other. “

While we wait for the USA strike strike fighter after further delays Indonesia will have 4 russian planes participating with us in war games . Those planes are superior to anything we have at present including the stop gap planes we bought because of constant delays as well as significant rising costs from the USA . If its not clapped out helicopters , refurbished and largely useless tanks its waiting overly long for planes that while on paper worthwhile are too expensive when other options are available now .

@Lady: I can see the answer now: We must enlarge all of our bridges! Sigh, no, not serious.

I suggest we stop manufacturing cars and import only American vehicles – and cease growing crops so we can import all glut harvests from the USA.

Gill@ard has already handed them Darwin so it’s not clear how else we can appease Dick Armitage.