The Greens versus Labor

The Greens and Labor: Peter Christoff writes: Re. “Why the Labor Right is off-beam on the Greens” (July 9, item 1). OK, so now let’s have look through the other end of the telescope. For quite some time now there have also been Greens who have wanted to distance themselves from the ALP — to […]

The Greens and Labor:

Peter Christoff writes: Re. “Why the Labor Right is off-beam on the Greens” (July 9, item 1). OK, so now let’s have look through the other end of the telescope.

For quite some time now there have also been Greens who have wanted to distance themselves from the ALP — to show real independence from its “old” ideological content and political style.

It’s these Greens who — simplistically — see Labor as “without values”. They are responding to those parts of Labor that vigorously defend fossil-fuelled industrialisation, oppose marriage for same s-x couples, and that at the end of the day are concerned more about their own power base than the future of their party, let alone the rights and needs of humans or other species now or in the future.

It is some of those same parts of the ALP — the NSW Right and now parts of Labor in Victoria — that want to ditch the Greens. While still expecting that Greens’ preferences have nowhere else to go but to flow back to Labor.

If the ALP is prepared to put the Coalition — in other words, to put support for destruction of the environment, for climate denial, for the demolition of rights in the workplace, for xenophobia, and for funding cuts to public education, health and social welfare — ahead of the Greens, then there is no reason for the Greens to preference the ALP either.

It will only take a slight push for the Greens to run a “dead” ticket, preferencing neither “old” party, in some or many or even all seats in certain states. And some Greens will then preference vindictively against Labor.

A soft estimate suggests that Labor currently relies on Greens preferences for its hold on around 10 of its 27 marginal national lower house seats. Those seats are probably already “gone” — but others will become marginal in their place. A slight leakage of Green preferences to the Coalition would be enough to swing another five of those additional, newly marginal seats.

So if you reckon the next election will be a wipeout for the ALP, think about the consequences in the lower house of a real war of attrition based on preference flows and anger.

As ever, the current master tacticians of the NSW Right have been doing their numbers. They count on their fingers and toes. Add Paul Howes’ and Sam Dastyari’s digits — assuming they still each have a full complement and neither has mutant extras — and that could be the rough tally of seats they will deliver Labor. They must dream of an enhanced landslide to the opposition, and an ideological rift that would win the ALP a long spell in the political wilderness. Which is one wilderness not worth spending time in.

John Richardson writes: Re. “Gillard works the room and brands the cause with NSW Labor” (yesterday, item 1). So, Bernard Keane and Julia Gillard agree that “Labor’s cause is indeed ‘working Australians’?”

Doubtless the many thousands of older Australians who can’t find work and the tens of thousands retrenched as a result of ruthless “rightsizing” by the likes of Qantas, ANZ, Bosch, Fairfax, AGL or conservative premiers will be ecstatic at this news; as they doubtless will be by the exhilarating prospect of joining the 40% of their “bruvvers” already wedded to the wondrous benefits of casual work.

And no doubt those comrades busy picketing Toll/Coles at Somerton will be excited and relieved to learn that the world’s highest-paid politician is putting their interests first?

James Jeffrey, journalist at The Australia, writes: While I was off in the bush last week, Crikey ran an item on the Chris Mitchell/Neil Chenoweth stoush. My brief take on the affair was mentioned, but not my follow-up that appeared in Strewth the day after. For the benefit of the two or three readers who may be craving a sense of closure, here it is: 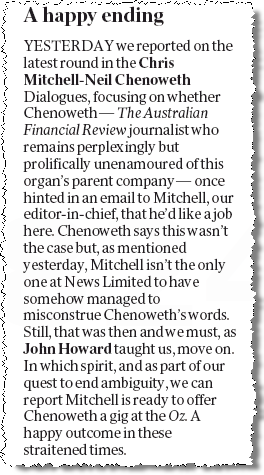