The Herald Sun website has shed almost 20% of its year-on-year traffic since it went behind a paywall in March -- a drop but not a calamity according to top media buyers.

News Limited’s Herald Sun website has shed almost 20% of its year-on-year traffic since it went behind a paywall in March — a drop, no doubt about it, but by no means a calamity, according to top media buyers.

The Herald Sun averaged 343,103 daily unique browsers from April to June this year — an 18% decline from the same period in 2011. Traffic to the website of Melbourne rival The Age was steady over the same period, while tabloid sibling The Daily Telegraph picked up visitors, according to a Crikey analysis of Nielsen data. Visitor numbers to The Australian, which introduced a paywall last October, declined by 27%. 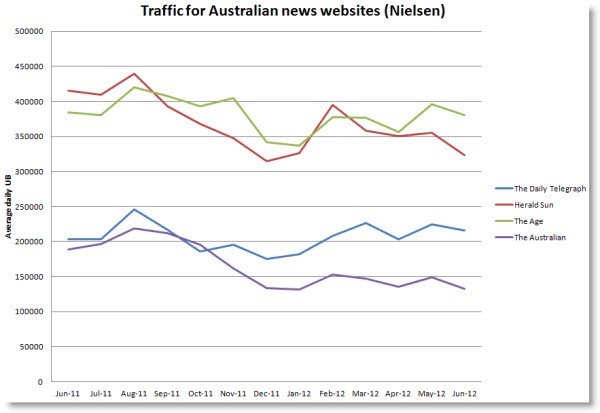 “If they hold around these figures you would have to judge this an early success,” Steve Allen, managing director of  buying agency Fusion Strategy, said of the Herald Sun result. “I was thinking the drops might have been greater so these look like pretty good initial scores.”

Allen says a 20% decline in visitors following the introduction of a paywall will have a negligible impact on advertising revenue.

“If putting something behind a paywall means that less attractive demographics drop off then that’s not a bad thing,” he said. “The free riders aren’t people we want to engage with; if the core audience isn’t dropping off then it doesn’t really matter.”

David Gaines, CEO of media agency Maxus, agreed: “I can’t see anything that suggests it’s been a disaster.”

Media buying sources tell Crikey that News Ltd will be pleased with the result as the company expected a drop off closer to 25%.

The crucial question, of course, is: how many Herald Sun readers have actually agreed to hand over their credit card details in exchange for a “digital pass”?  News Ltd has yet to release any figures on how many people have signed up and has not, according to media buying insiders, been spruiking any subscriber success in ad-land.

“They’re being very cagey about who their subscribers are and how many have signed up,” one media buyer, who asked to remain anonymous, told Crikey. “They are being very quiet about performance so I expect we would all draw the same conclusion from that,” said another.

Curiously, readers who signed up for a two-month free trial can still access all the site’s content for free, even though though their trial period expired over a month ago. Herald Sun editor-in-chief Phil Gardner kept schtum this morning when asked for comment by Crikey.

The business model for the Herald Sun paywall is based on readers’ willingness to pay $2.95 a week for premium content — especially AFL (including elements of the popular SuperCoach game), crime and opinion from commentators such as conservative firebrand Andrew Bolt. Other, more generic, content remains available for free.

The tabloid’s paywall experiment is being watched closed around the world because it is one of the first mass-market papers to ask readers to pay for content.

“Popular dailies usually get the vapours when you talk about paywalls because they think it’s all about mass audience,” Steve Allen said. “This is the acid test.”

Unlike News Ltd’s “freemium” model — which mixes free and paid content– Fairfax has announced plans to introduce a New York Times-style metered paywall on The Age and The Sydney Morning Herald websites. Readers will be allowed to read a specific number of articles before being asked to pay.

The traffic graph has all lines going south with no level out . Isn,t it a bit premature to assess success or deny failure ? Also how long is it since the two month or whatever it was free trial ceased ? Its not mentioned but would be of relevance .

In the graph I mean ie relevance .

A unique user won’t necessarily mean a successful visitor. I’ve been directed to Herald Sun and The Australian countless times but go no further when I hit that paywall. So I suspect the true drop off would actually be somewhat higher.

If the SMH introduce a paywall just like the NYT, I will be happy.

It is trivial to circumvent.

That said, the News Ltd paywall is quite easy to circumvent anyway.

Agree with AJH – neither is the NYT. Shee, if I can work it out, anyone can