With just three days to go in Melbourne's bellwether byelection pitting the ALP'sJennifer Kanis against the Greens' Cathy Oke (and Crikey founder Stephen Mayne), it's time to cast an eye over the situation on the ground as Julia Gillard hopes to dodge a grenade lobbed from what was once Labor's impregnable heartland.

With just three days to go in Melbourne’s bellwether byelection pitting the ALP’s Jennifer Kanis against the Greens’ Cathy Oke (and Crikey founder Stephen Mayne), it’s time to cast an eye over the situation on the ground as Julia Gillard hopes to dodge a grenade from what was once Labor’s impregnable heartland.

You know newspapers are struggling when they’re forced to run months-old polling from a third party to get a sense of the state of play, but that’s the hand Age political editor Josh Gordon was dealt this morning when he dredged up internal Liberal polling from May pointing to a “close” race.

The only published poll to date has been this Gary Morgan effort way back on June 12 that had the Greens triumphing on preferences with 48.5% of the primary vote against Labor’s 37.5% and Mayne’s 7%. Last week The Oz reported second-hand “internal” Labor polling blaming Julia Gillard for a looming Kanis loss — a result apparently contradicted by The Age report.

Gordon’s Liberal poll also seemed bizarre given other surveys showing 20% of the Victorian community didn’t know who Opposition Leader Daniel Andrews was, while according to The Age, 33% of the hyper educated Melbourne electorate couldn’t name him.

All this is set to change when ReachTel’s “robo call” results from last night are released. Sources told Crikey they were asked about the East-West tunnel (stay tuned for a splash claiming all candidates are “out of touch” on the issue), Gillard, and primary voting intention.

A ReachTel manager confirmed to Crikey this morning that his company had been “doing polling” and that it would appear in “a newspaper” over “the next few days”.

Internally, Labor has been continuing with its polling, while the Greens have been holding focus groups that have reportedly come up with lines claiming Oke would be “in the middle” of state parliament.

Fringe candidates have rounded on ABC Mornings presenter Jon Faine for failing to include them on his election-eve panel at the Queen Victoria Market on Friday. The three-person panel includes the two major candidates — Jennifer Kanis and Cathy Oke — but just one third candidate, Stephen Mayne.

Independents lined up to sledge the veteran broadcaster, saying they were more popular than Mayne and deserved to have their voices heard.

S-x Party candidate Fiona Patten claimed Greens volunteers were handing out Mayne how-to-vote cards — “It’s like having two Greens and Labor there … and no independents. “Faine has shown his colours that he is a Greens supporter … and he is being biased. “I’m going to give him a call now,” she added. “I would love to be on that panel … we polled over 8% at the last byelection in Victoria.”

A spokesman for Independent African community candidate Berhan Ahmed, Ken Betts (a former Liberal candidate in Footscray interestingly) said Faine was “disgraceful”. “Where’s the equal time? It’s all about Greens and Labor,” he said. “They’re [voters] are coming our way, he’s getting the Vietnamese vote because my wife is Vietnamese and I’m on a number of Vietnamese committees, the Africans are supporting him, the Chinese are supporting him … he’s going to out-poll Stephen, that’s for sure.”

Mayne said Faine needed to get the six candidates at the outside broadcast or on the phone “and it’s my understanding that’s what he’s doing”. A physical presence would mean Aunty would have to raid its Southbank closets for more microphones and possible an extra trestle table to accommodate Patten, Liberal-leaning independent David Nolte and Ahmed.

“The only published poll that has been taken had me on 7% and I’m confident I’m going to finish third … and the bookies say the same thing,” said Mayne.

The ABC maintains a rigorous framework for its election coverage to ensure each candidate has an equal share of voice. An ABC spokesperson did not respond to a request for comment this morning.

A truckload of journalists from The Australian have fanned out across the small Melbourne district to get the lowdown on the latest scandal to beset the Greens, that, according to its editorial writer, “deserve to be destroyed at the ballot box”.

Yesterday, gangland specialist Adam Shand was reporting on the party, and today an amazing five yarns were splashed over pages one and two appeared courtesy of John Ferguson, Matthew Franklin and Mark Schliebs, with ledes quoting Labor figures who variously “blasted” the Greens’ “unachievable” policy agenda that was “undermining” “real life issues”.

And last night at a well-attended “meet the candidates” forum at the Kensington Association, Crikey favourite, The Oz‘s Victorian chief reporter Chip Le Grand, was seen sopping up the atmosphere. 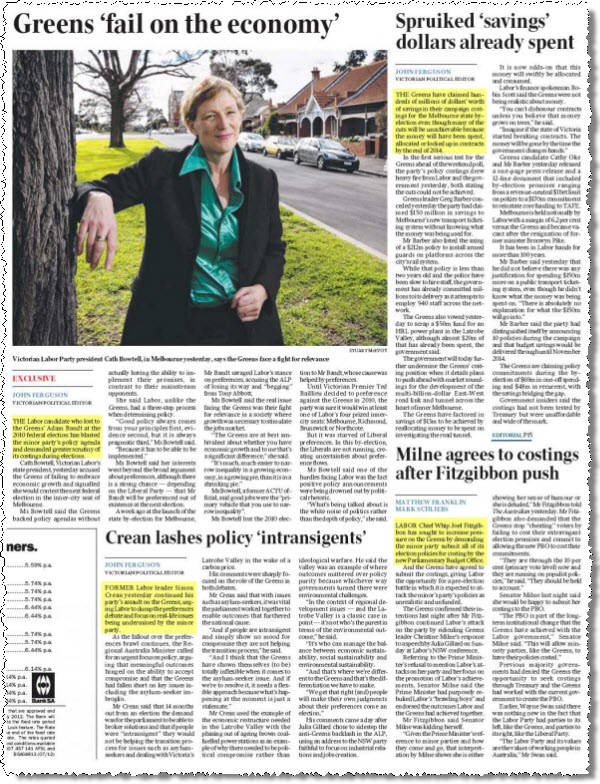 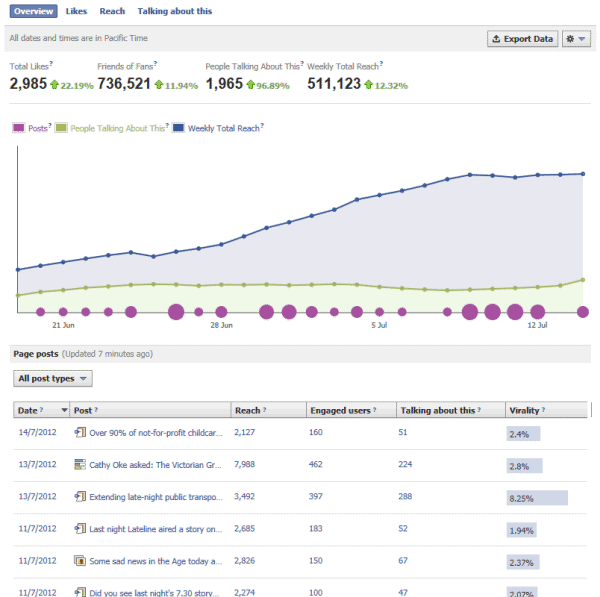 Greens Victorian titular head Greg Barber was ebullient this morning, telling Crikey that “with such a tight race, our view from the beginning was that social media could play a big role and we’ve made the effort”.

Barber said he expected the vic.greens.org.au site to be swamped in coming days as voters start “Googling who to vote for” in the lead-up to Saturday’s end game.

The Oz may be fuming if the GREENS get up, but not as much as the Labor Party i’ll bet! Edward James