Are the Labor natives getting restless?

There is a price to be paid by political leaders when they reserve for themselves the power of patronage ...

They are from New South Wales! There is a price to be paid by political leaders when they reserve for themselves the power of patronage. Those passed over for ministerial office by a Prime Minister can become quite disruptive as Julia Gillard discovered again last night when Joel Fitzgibbon took to the ABC’s television talks show Q&A.

Now I know the government whip, who thinks he should be a government minister, was only stating the obvious with his comments about the eventual fate of leaders that the opinion polls show will lead their party to defeat. That’s not the point. Players in this game are skilled at avoiding the obvious when that is in their interest and just as skilled as adopting an aura of innocence as they stir up trouble by giving an honest answer.

Having said last night that “populism matters in politics, and no matter what political party you’re talking about, if leaders remain unpopular long enough they’ll inevitably stop leading the party”, this morning Mr Fitzgibbon was acting as if he could not understand what all the headlines were about. He was just speaking the truth and stating the obvious

“The Prime Minister has plenty of time between now and the next election and there’s no reason to think she can’t improve those polling numbers.”

No indeed, we are not mugs and can spot the preludes to an attempted coup when we see and hear one.

Mr Fitzgibbon’s NSW Labor parliamentary colleague Robert McClelland pointed us in that direction when he chose to resurrect with a parliamentary speech the involvement years ago of Miss Gillard with a trade union official accused of financial impropriety that was followed up on Saturday by The Weekend Australian.

That incident is a none too subtle reminder that there is a price to be paid when you dismiss an Attorney-General from your Cabinet.

Kevin Rudd, the heir apparent waiting quietly while the experts in dismissing leaders with their NSW heritage in such matters do their stuff, appreciates the point. He has promised in the event of a comeback to change the system he introduced whereby the leader selects the ministry and return to the long Labor tradition of letting the Caucus members vote.

Lest we forget – not everything changes. Not that a Kevin Rudd return would see everything change as Mark Latham so acerbically reminds us in the latest issue of The Spectator Australia. Inspired by the comments of Therese Rein that her husband Kevin would only return as Labor leader “on the proviso that it was completely about the country, the national good, Australia’s place in the world” that other former party leader had this to say:

How one forgets. It has never been about Kevin. The vindictive leaks during the last campaign, the destabilisation of every leader under whom he has served, the non-stop networking of Australia’s business and trade union elites, the thousands of Press Gallery briefings, the six bids for the Labor leadership – it was all about the country, the national good, Australia’s place in the world.

And the expert view of Rudd’s colleagues that he is a ‘psychopath’ and a ‘complete and utter fraud’? According to Rein, ‘that’s actually not about Kevin. It’s about the people who are calling him names.’ Nothing, it seems, is about Kevin, the selfless one.

As Talleyrand said of another pretentious family, forever conniving to fulfil its born-to-rule self image, the Rudds have learned nothing and forgotten nothing.

Car sales trend is up. The morning news from Ford about 440 job losses might suggest otherwise but the figures from the Australian Bureau of Statistics suggest that sales of new vehicles are healthy enough. 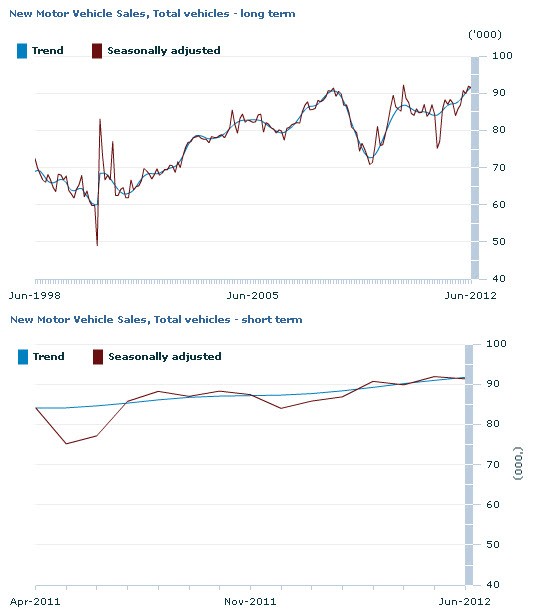 I am sure that Fitzgibbon was right when he said that ‘populism matters in politics . . .’ and I’m equally sure that he meant ‘popularity matters . . . ‘. But an understandable mistake from the NSW Labor right.

Yes Gavin, and haven’t these same clowns just spent the past week lambasting the Greens for being ‘poulist’?

It would be funny if it wasn’t so sad.

restless, worry, fear thats what is happening within Labour: You see, the
UNIONS who are actually corrupt have installed a PM to unleash the fury
of the tortoise: for those who are not familiar with the tortoise, it is the
Motto of the outdated policy of fabianism. The other motto is the
wolf in sheep clothing.

policy according to fabiansm is to inflict maximum misery slowly. we see it in
the carbon tax which was totally unnecesary and uncalled for.(this brings
pain to society), the introduction of the MRRT .(this is now a worrying
factor for Swan because of the downgrade in earning from this tax).
the Unions can do all their workers a great favour by firstly calling on the
PM to investigate a union boss named Bruce Wilson who embezzled millions
of union money, then ask Craig Thompson to pay up all those unions
monies he used wrongfully. then Ask Bill Shorten to respect workers by
never swearing (he used a F word when speaking to Kathy Jackson) : After
getting your Act together inform the public about your real Agenda. The
Unions should look after their workers interests and not tell workers who
to vote for or who not to vote for.As the union officail themselve will know
that labour government in the past have left Billions in debt which the
coalition government came in and implemented measures to wipe out
LABOURS Debt and progressively brought the budget into a massive
surplus. Union ledLabour once again came in and thrashed the surplus,
splashed out billions in handouts,overpriced the school halls and the pink
batts and placed a hefty price tag on the NBN which by the way is running
at the speed of a tortoise. Swan has presided over several budgets and all
of them were deficits with a promise of a small surplus in the year 2020…
The fact is that unions just cannot stomach to see any governmemnt
other than the ALP. we notice lots of strikes and industrial action in non
LABOUR states. these states are fixing up the mess left by the previous
labour government and the unions just cannot understand it. the example of
the debt left by the previous Qld Labour:”if you stack $100 bills one over
the other you could reach space” that is the enormity of the debt.
In Victoria the previous Labour government left masive debts and highly
priced contracts in the desal plant and the myki . these are debts that
need to be addresed. but the unions cannot see this.

Australian all will rejoice and prosper only when the ALP and greens stop
having unlimited influence on government.