Would you like a c-nt with that? When a Coke promo gets weird

For many people in Darwin and the Top End, "budju" is a word in common use, particularly among those of us who’ve been here for a while. 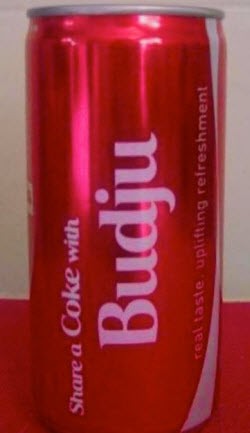 This Coke can was made as part of the “Share a Coke” promotion at the Bondi Junction Westfield in Sydney some time in October last year. It turned up on Facebook over the weekend.

For many people in Darwin and the Top End, “budju” is a word in common use, particularly among those of us who’ve been here for a while. Budju is part of the Top End Aboriginal vernacular lexicon. I’ve not found it included in any printed dictionary.

There are two main senses — meanings — for budju. In the more commonly used general sense it describes an attractive woman. In the historical and more particular sense it is used to refer to a specific part of a woman’s anatomy.

Budju is a word I would normally only use among close male friends and only rarely if women were present, and then they would have to be women that I knew well. Its not hard to find out why we should be cautious with budju — here is the definition from The Urban Dictionary:

1. budju: Originally an Aboriginal translation for ”v-gina” the word’s meaning has evolved and can be used as social term to classify a good looking person. Geographically localised to Northern Territory Australia. “Man!! Sheryl is a budju eh?”; “That chick is one sik budju” or “I have an itchy budju.”

And this is from The Online Slang Dictionary (note different spelling):

I’m curious about what checking, if any, was done before “budju” ended up plastered along the side of a Coke can.

The promotion was a big gig for Ogilvy & Mather of Sydney, winning them a Bronze Direct Lion and a Bronze Outdoor Lion at the 2012 Cannes Lions “Festival of Creativity”.

Coke could have no complaints. In May Monash University’s Presto blog reported comments by Lauren Thompson, Communications Manager for Coca-Cola South Pacific, that: “62,208 virtual Coke’s were created, of which 56,211 were shared. This generated 1,719,227 newsfeed impressions.” Thompson also explained there had been a 92% increase in posts to the Facebook page.

Getting a friend’s name plastered on a tin of the sickly sweet syrup was easy:

“Simply get down to a participating Westfield shopping centre and the friendly Coke team will put your name on a 200ml Coke can — for real! Limit of one can per person, while stocks last. Conditions apply, see below.”

The conditions were straightforward, but included the admonisjment that Coke would not:

“… print a name that is illegal, obscene, derogatory, threatening, violent, scandalous, inflammatory, discriminatory (on any grounds), or would give rise to or encourage conduct which is inappropriate or illegal or which is otherwise unfit to be printed.”

I don’t reckon that putting Budju on the side of a Coke can is “illegal, obscene, derogatory, threatening, violent, scandalous, inflammatory, discriminatory, or would give rise to or encourage conduct which is inappropriate or illegal” — but it may be in poor taste and may be “otherwise unfit to be printed”.

Would you like a c**t with that? When a Coke promotion goes weird