From the Crikey grapevine, the latest tips and rumours … Controversy indeed. Which Australian investment bank has a team dubbed the “tax controversy unit”? We hear central executives are involved in the unit, and that investors aren’t getting much in the way of franked dividends any more due to some suboptimal moves by the bank. SackWatch: […]

Controversy indeed. Which Australian investment bank has a team dubbed the “tax controversy unit”? We hear central executives are involved in the unit, and that investors aren’t getting much in the way of franked dividends any more due to some suboptimal moves by the bank.

SackWatch: Rural haven. Fairfax’s move to shed 1900 staff is starting to bite, with the redundancy process opening at some metro papers today. But what about the country papers run by Rural Press, which merged with Fairfax in 2007?

We’ve heard that Fairfax regional managers recently sent out an email “reassuring that redundancies were only for metro staff” and there were no plans to cut jobs at regional papers. “They’d be mad to — they’re the only ones making money”, our country mole said.

Curtains for Firm Spy? Popular legal gossip site Firm Spy seems to have hit the rocks. Two weeks ago we reported the site hadn’t been updated for a month; now it’s an empty shell. We’ve heard cyber attacks and litigation brought the website down.

When Crikey contacted Firm Spy about its troubles for the previous story, a spokesman said the site was “back online after some technical issues over the last few weeks”. We’ve put in another request for comment today and will keep you posted.

Crest conspiracy. Last week Crikey brought you the story of how Queensland is to ditch its “Beattie burger” logo in preference for the old-school regal crest on stationery, websites, etc. Now it seems the move may be more than a dislike of the graphic art that produced the current logo, which makes some in the Crikey office think of french fries.

Bid farewell to the outgoing logo:

A Queensland tipster has alerted us to an email campaign to banish the Beattie burger — in the name of freedom and the constitution, no less.

I hail from a regional Queensland town and for the past several Christmas lunches have endured spittle-flecked ranting from the more conservative/conspiracy-addicted members of the family about how the Labor government scrapped the coat of arms in favour of the “Beattie burger” logo because it freed them of their constitutional obligations.

The wording, the story goes, refers to state powers and responsibilities provided “under this crest”, ergo ditching the crest allowed them to sell Crown Land to China and privatise the railways (????). Forwarded emails, featuring prolific use of caps lock, underlining, italics and red font, were printed off and tendered to me as evidence of this great swindle. The chain of addresses in the forward history showed this was common knowledge all over the state. (Mainstream media outlets were to (sic) corrupt to break the story.) I tried in vain to suggest the new logo was more likely the work of a young graphic artist wanting Queensland to have a more modern “look and feel” for the 21st century, but this won me no friends or beer, so I shut up.

Crikey is intrigued by the campaign and would love to see the email —  presumably Premier Campbell Newman has already. Can you help us out?

Also related to Queensland’s crest changover, a reader has pulled us up on our inquiry of whether it is acceptable to eat one’s crest (the ascendant Queensland coat of arms includes a red deer, a declared pest that some shooters say they like to hunt and eat). Our reader points out that they have eaten kangaroo and emu, so they’ve got the Australian coat of arms covered.

In fact, Crikey understands a Coober Pedy joint sells a “coat of arms” pizza that features kangaroo and emu on a cranberry sauce base, topped with silverbeet (we’re not sure where the beet fits on the crest). Our taster claims it is the “best pizza I have ever eaten”. Very patriotic.

CarbonWatch: freight transport. The introduction of the carbon tax has led to some silliness and attempted price gouging, most prominently at the Brumby’s bakery chain. Today’s Herald Sun claims the tax is pushing up the cost of freight transport for small businesses, farmers and supermarkets. 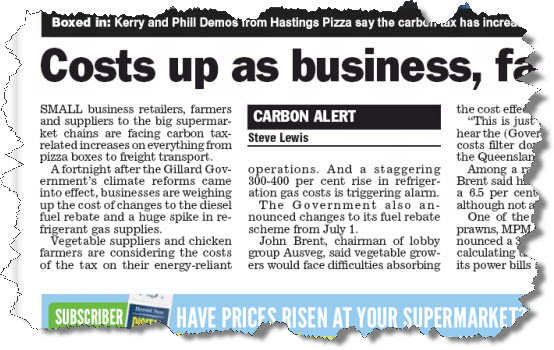 The thing is, according to a spokeswoman for Climate Change Minister Greg Combet, the carbon tax does not apply to petrol or diesel for passenger or light on-road commercial vehicles, and it does not apply to heavy on-road vehicles until 2014. So no one pays the carbon tax to shift goods in trucks to supermarkets. Fuel tax credit entitlements have not changed for agriculture, the spokeswoman said.

The carbon tax does effectively apply to fuel for off-road users such as mining companies, and it does apply to rail transport — but that’s not quite what the article is implying. “Readers of the article may draw an incorrect conclusion regarding the impact of the carbon price on transport,” Combet’s spokeswoman told Crikey.

The Hun has also conveyed the outrage of a pizza shop owner in the Victorian town of Hastings, that the cost of his pizza boxes is to rise 2.5% due to the carbon tax. We’ve done some googling and found that pizza boxes cost between 61 cents and $1.47 each (including GST). So a rise of 2.5% means the cost of a box goes up by between 0.8 cents and 3.7 cents due to the carbon tax. In the case of small pizza box, the carbon-tax-related box increase is so small there’s not even a coin for it.

Got any examples of strange or silly price rises attributed to the carbon tax? Drop us a line at CarbonWatch.

When is this govt. going to take on these repeat offenders ( Liars ) in the media and on the opposition side who just keep Lying about everything ???