Ten at sixes and Sevens. The real story out of the mid-year TV ratings isn’t so much the closing of the gap on a weaker Seven by a stronger Nine, but the continual looting of the Ten audience by Seven and Nine, while SBS has edged up slightly and the ABC is doing OK, not worse as some recent commentaries have claimed.

In fact, the loss of share by Ten is an indictment on the management of the network by Lachlan Murdoch in his time as interim CEO in 2011. He is now chairman of the company and still hasn’t accepted responsibility for the network’s very weak ratings, revenue and earnings showing this year. It hasn’t all been the fault of the weak revenue position of the industry.

Murdoch not only put in place or signed off on all the changes at Ten, which have seen its share of viewing (and advertising drop sharply), but he personally head-hunted CEO James Warburton from Seven, a move that upset Seven and its owner, Kerry Stokes, to the point where Seven sued and forced Ten to keep Warburton away from management roles until the start of this yeas, instead of starting him around September of 2011. That meant Warburton had no real influence on the first-half performance of Ten and has only started having a major say with programming such as The Shire, which starts tonight, re-signing Offspring for two more series, plus the weak Being Lara Bingle and a couple of reality series due to appear later in the year.

The Fink caught in Wiki war. Ray Finkelstein isn’t just copping criticism from media bosses over his recommendation that Australia needs tougher media regulation — Wikipedia users are getting stuck into him as well. As of this morning, the former judge’s Wikipedia biography states:

“Some observers have noted that Finkelstein was simply a rabid leftwing troll out to do the government’s bidding in an attempt to place a cloak of respectability on it’s attempts to muzzle the government’s media opponents. Finkelstein achieved these aims and more, by holding the inquiry and filling it with left-wingers. It’s been noted there wasn’t a single voice in the testimony to oppose the finkelstein restrictions on free speech. Finkelstein is a disgrace and the inquiry was a abject disaster for free speech in Australia. Some people suggest Finkelstein will end up being one of the most reviled men in the country if the government follows the advice contained in the report.”

The error-ridden bio — which was updated on June 27 by an anonymous user — contains no references for these outlandish assertions. The user in question had previously claimed: “People have recently begun to use the name Finkelstein as a pejorative adjective and noun to describe supporters of the Finkelstein Report. For example, ‘the finkelsteinians are finkelsteining free speech in Australia’.” — Matthew Knott

Tele praises The Parrot’s style. 2GB shock jock Alan Jones has taken out plenty of gongs over the years for his ratings triumphs, rugby coaching feats and charity work. But his fashion exploits have gone unrecognised — until now. The Daily Telegraph today named Jones No.10 on its list of Sydney’s 20 most stylish men. 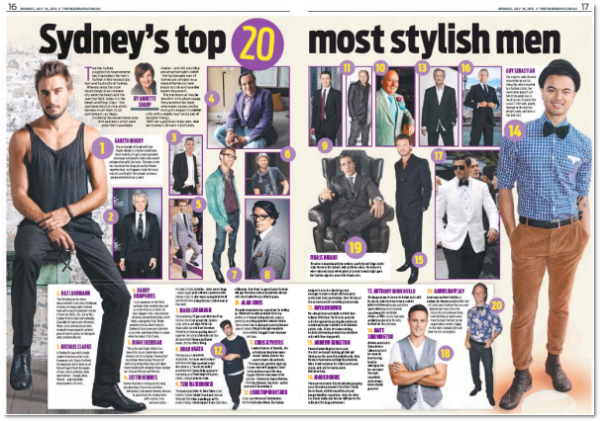 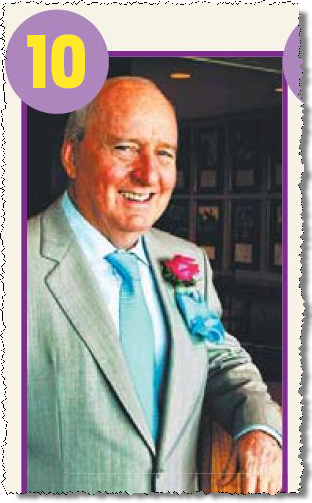 “The radio broadcaster has a penchant for dolling up,” wrote the Tele‘s Annette Sharp. “Whether it be with a kerchief in his top pocket, or a top hat for Royal Ascot, or just a perfectly matching apple knit sweater combo, Jones knows how to look pretty and stylish and doesn’t mind letting his designer wardrobe clash with his Struggle Street champion persona.”

AFR reverses the Status Quo. Coles’ painful Status Quo promo may have come from left-field but we’re quite certain that the ageing rockers are right handed, something the Australian Financial Review missed this morning in a page 38 story where it appears the photo has been published as a reverse of itself. 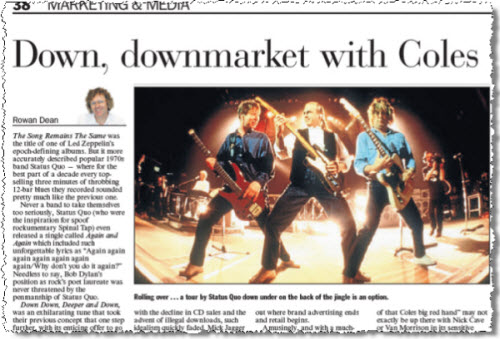 Front page of the day. French newspaper L’Equipe leads today with “The Tour nailed on site” as the iconic bike race dealt with a sabotage on the first stage of the breath-taking section of The Pyrenees. Tacks were thrown on the road causing about 30 riders to have their bike tyres punctured in an incident that could have been a lot worse: 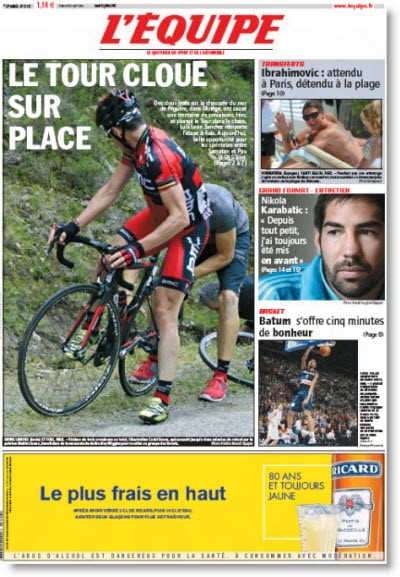 The Department of Corrections. Today’s The Australian carries this correction. Ouch.

“The Kerry Stokes-controlled media group Seven West Media is lining up a $440 million share sale, looking to raise funds to pay down debt with its earnings hit by an advertising slump.” — The Sydney Morning Herald

“You would think, after the Obama campaign debuted their knockout punch yesterday, the Romney campaign would want to come out strong with their next ad. Instead, they’ve pissed off two out of the three journalists featured in their 30-second spot.” — The Atlantic Wire

“Britain’s austerity drive is finally reaching one corner of the small screen: the total pay of the BBC’s handful of on-screen million-pound earners has dropped by a third to just short of £10m in the last financial year. Stars such as Graham Norton and Jeremy Paxman are among those understood to be taking pay cuts during the period.” — The Guardian