Coles strike-breakers: who’s who at the Somerton stand-off

The community picket outside the Coles distribution centre in Somerton is unlikely to be broken up by Victoria Police, even if the Supreme Court slaps an injunction on 25 activists involved in the dispute with employer Toll Holdings.

The community picket outside the Coles distribution centre in Somerton is unlikely to be broken up by Victoria Police, even if the Supreme Court slaps an injunction on 25 activists involved in the standoff with employer Toll Holdings.

Andrew Stewart, an industrial relations professor from the University of Adelaide, told Crikey this morning that today’s court action brought by Toll would be regarded by the police as a civil matter and would not attract riot-squad style tactics unless violence ensued.

This afternoon, Justice Anne Ferguson is expected to uphold Toll’s injunction in attempt to end the National Union of Workers’ “illegal” picket, that has prevented Coles trucks accessing the site. Last week, Fair Work Australia declined to rule on the matter, saying the picket fell outside of its bargaining orbit.

“It’s not for the police to be enforcing the court order,” Stewart told Crikey this morning. “Police need to form an independent view about whether they believe a crime is being committed … they probably won’t intervene unless there’s a clear breach of the peace.”

Stewart says an arcane legal provision in Victoria outlawing “watching and besetting” means that technically, even peaceful pickets are banned. Other arguments proffered by Toll could hinge on allegations of public nuisance or trespass.

A Victoria Police spokesman told Crikey this morning that the force wouldn’t prejudge the court’s decision. “It hasn’t exploded into hysteria out there in Somerton just yet so at this point it’s just hypothetical,” they said.

Striking workers claim the company’s sub-par offer undercuts the wages and conditions of direct Coles employees in other states. They are demanding rostered days off, shift loading for unsociable night shifts, the transmission of casuals to permanent status after six months, extended right of entry, as well as a wage increase.

NUW spokesperson Emma Kerin says the union will comply with any injunction — but the picket could well be continued by other activists and union members. Stewart agrees that Toll may have to “start again” if it wanted the injunction to cover other individuals at the site, whose numbers over the weekend topped 200.

Yesterday, ACTU president Ged Kearney told workers that Coles had failed to properly engage — using Toll as a ruse to inaction — and that workers would continue to strike until a compromise could be reached.

The NUW’s Victorian branch has been at the forefront of some prominent recent industrial spats, including the Baiada Poultry showdown where police aggressively attacked a Laverton North picket under the cover of darkness. The presence of Socialist Alternative at the Coles site (the group is running daily transport from Trades Hall) could rile the plod, who recently disaffiliated from the VTHC after it hosted a forum on police brutality that unsurprisingly didn’t sit well with police union hard heads.

The dispute has attracted the usual IR suspects keen to use any workplace fracas as a talismanic struggle for an economically rationalist view of the world perpetuated by scorched earth think tanks.

In The Australian Financial Review this morning, Grace Collier said the union was engaged in “total lawlessness”. Rather ironically, Collier, who did not return calls, has made a remarkable career transformation from an Queensland NUW official into a vigorous prosecutor of the employer perspective.

A former union colleague and current trade union leader told Crikey this morning Collier was unpopular in Queensland due to her “know-it-all attitude”. “Contempt for working people dripped off her…she basically thought workers were dopes who had to be led by the nose.”

She now runs a website, Dismissals.com.au, advising companies on how to sack staff, and is a consultant with Adelhelm & Associates, a firm that tutors bosses on how to play industrial hard ball with their workforce.

Toll is being represented in court by HR Nicholls Society head-kicker and Kathy Jackson fan Stuart Wood, and instructed by union-busting corporate law firm Freehills. Collier is also a HR Nicholls adviser (she addressed the society on the same day as Jackson and Wood last month) and has been out in force offering her nuanced perspective on the dispute in the media.

Unions say the latest dispute is a prime example of a major Australian company using an arms-length contractor to drive down job security and conditions, in the same manner as a labour hire operation. The Somerton DC was set up by Coles as a “greenfields” site under John Howard’s WorkChoices legislation in an attempt to undercut conditions often sought by unionised workforces. The deal is starkly illustrated by this sign out the front of the site. 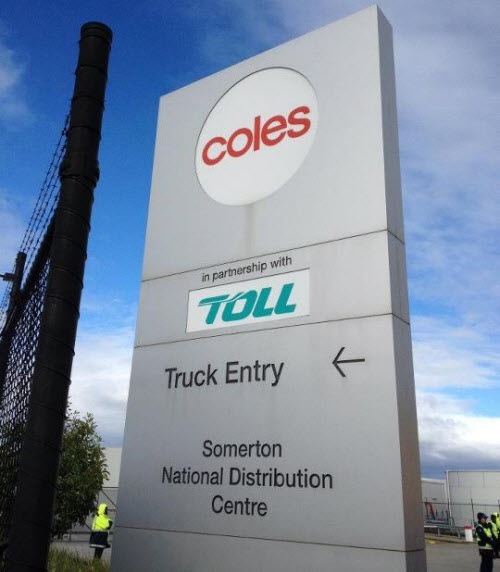 Strike aside, the Somerton National Distribution Centre sums up everything that is wrong with the national supermarket model for food distribution. Here’s what happens.

A farmer in northern New South Wales sells his produce to Coles. It’s put in a truck and driven to Somerton, where it sits for an unspecified amount of time – could be days, could be weeks in cold storage.

Some of that same produce is sent back to – northern New South Wales to the local Coles supermarket.

Left Indicator:
I think that the union movement needs to support the
ideaology of worker cooperatives.Even if it is an uncomfortable fit.