From the Crikey grapevine, the latest tips and rumours … “Beattie burger” gets the flick. The Queensland government is to ditch its current logo and return to the old-style regal crest on websites, stationery, etc. A spokesman for Premier Campbell Newman told Crikey that the premier’s preference was to use the crest “rather than the […]

“Beattie burger” gets the flick. The Queensland government is to ditch its current logo and return to the old-style regal crest on websites, stationery, etc. A spokesman for Premier Campbell Newman told Crikey that the premier’s preference was to use the crest “rather than the Beattie burger”, as the spokesman took the chance to elaborate on the theme that it resembled a hamburger.

Out with the old, the current logo, which is to be ditched:

In with the new, the Newman preference: 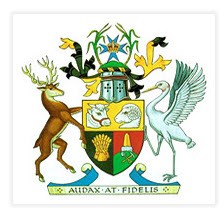 It may be a case of dual logos for the sunshine state, however. Confusingly, the premier’s spokesman said there were “no plans to kill off” the current logo, but rather, the old crest would progressively replace it. The spokesman also claimed the transition would not cost anything because stationery with the current logo would be used up, while the logo would not be changed on websites until they were due for an overhaul anyway.

“We’re in no hurry, it will just be something that happens over time,” the premier’s spokesman said.

The born-again crest dates from 1977 and features a red deer and a brolga. The red deer is an imported species now declared a feral pest. This raises the issue of whether it is appropriate to eat one’s own crest.

The insider who tipped off Crikey to the logo change is not so sure the transition will be free, saying: “that won’t cost them much will it? Pfffttt!”.

It’s an interesting choice by Newman, who upon being elected declared he did not want to change the government’s logo because “the last thing I’m interested in is spending taxpayers’ money on changing stuff for the sake of changing stuff”.

Muddy waters on clean coal. A mole from the much-trumpeted Global Carbon Capture and Storage Institute, a $400 million taxpayer-funded group set up to reduce greenhouse gas emissions from fossil fuels, claims the institute is getting ready to go out to market and seek donations from businesses.

The GCCSI was a Rudd brainchild that had its funding reduced and has struggled to get runs on the board, as efforts to capture emissions from power stations and bury them underground have faltered in recent years. Our mole, an institute ex-staffer, says the bosses are worried about losing their public funding if the Coalition wins government, and hence is planning on asking Rio Tinto, Xstrata, etc, for up to $250,000 each as a buffer.

The insider’s opinion is that businesses would be “pissing it up against the wall” if they contributed, because CCS is “going nowhere”.

Crikey tried to put this report to the GCCSI but were told media staff were not available. Crikey’s request for a media mobile number was rebuffed. We’ll let you know if they get back to us.

Perhaps the media staff are preoccupied going over a recent series of articles by Fairfax’s Lenore Taylor on the institute, which made for interesting reading.

Know more about what’s going on at “clean coal” HQ? Tell us — and feel free to use our guaranteed anonymous feedback form.

UPDAPTED SackWatch: Canberra Times. Fairfax’s daily rag in the national capital is reported to be losing its literary and arts editors as the company sheds jobs. Staff were told of the changes in a briefing by editor Rod Quinn yesterday.

Staff were told that the Crimes-specific roles would be replaced by Fairfax-wide content editors. Insiders say Metherall and Streak looked “a bit stunned” after the announcement. It caps off a turbulent time for the Crimes’ arts pages after previous editor (and newsroom stalwart) Helen Musa was moved on from her post by ex-Crimes editor Mark Baker.

Meanwhile, staff have been assured the Crimes’ parliamentary bureau is to stay open and remain separate from the other Fairfax bureaus, although it will have fewer staff. James Joyce has been appointed the paper’s news director — he and Quinn are from the Newcastle Herald.

O’Farrell freezes NSW art fellowships. Arts NSW has announced that it is reviewing its 11 art fellowships and scholarships — worth a combined $461,000 biennially — in order to ensure they “reflect the priorities of the government” , are relevant to industry and efficient in their administration.

The review will include a survey of past recipients, a needs and gap analysis and sector consultation.

Here are all the affected programs that will not proceed while the review is underway:

Arts NSW expects the review to be completed by late 2012. Crikey called around a few arts organisations, all of whom were unaware of the news (several were also unaware of the scholarships offered). But as David Ryding, the director of the NSW Writers Centre, told Crikey, the total amount of arts funding had stayed the same in the latest NSW Arts budget, and governments reviewing arts funding is nothing new. “It’s the same pool, maybe they’re just moving that pool around,” said Ryding.

SackWatch: Public service. With 38,000 job cuts announced for the federal and state public service in recent years, and governance expert Stephen Bartos writing in Crikey on the importance of management handling such cuts well, an insider tells us how it’s being done in their “very large” Commonwealth department in Canberra:

My area … had its razor gang exercise last year. It was musical chairs with a vengeance: “six jobs, two have to go, you all have to re-apply to be one of the four survivors” (this repeated throughout the area). It was horrible.

We lost some of our best people. Even after they’d heard they were not among those to be “tapped on the shoulder” they had already made inquiries elsewhere and were welcomed by departments that pay better than ours. A year later, we still have people on “graduated return to work” due to illness, and getting government-subsidised counselling. I was off sick for a while too. And I (almost lifelong public servant) will never ever feel the same about the job or my commitment to it.

Now we have lots of empty desks, but filling some of them are “consultants” hired for short or long term, to help get the work done. As Stephen [Bartos] points out, job cuts can be done well or badly. In the case of my area of my department, I know it was done badly and I see the results every day in the morale of my fellow employees and the quality of the work we are able to do.

Missing Mayne. Crikey founder Stephen Mayne has incurred the wrath of the ABC’s fiercely independent viewership over his repeated appearances on the national broadcaster during his byelection campaign for the state seat of Melbourne. Mayne popped up on low-rating ABC News 24 program The Drum on Monday night to discuss the ALP-Greens war, prompting a flurry of complaints as to the appropriateness of the lanky shareholder activist weighing in while preferencing the Greens at the ballot box.

His regular slot talking business on Rafael Epstein’s ABC 774 Drive program has been suspended for the duration of the campaign (aside from a one-off phoner to discuss David Jones and Gina Rinehart).”Have been kicked off Raf”, Mayne confirmed this morning. “On the byelection, there has only been a chat with Faine on dirt sheet plus a chat with Heather Ewart for 7.30 on Monday night.”

But there’s been plenty of other slots, as Mayne explained: “Since announcing, have done five non-byelection ABC spots available in Victoria, including one Fran Kelly interview about Gina, one 30-minute panel discussion on The Drum when I held up Labor HTV showing Family First preferences and one studio appearance on News Breakfast about Gina. Was also a Project TV story with a grab on David Jones, plus a live interview on ABC1 midday TV news on DJs and Gunns. And there’s been plenty of other radio spots interstate.”

No word yet as to whether Mayne will be more comprehensively boned during his Greens-assisted bid for election to the Melbourne City Council later in the year.

Journalists who have worked for politicians

Queensland logo: one wonders what exorbitant sum was originally paid to the creative types for the ‘Beattie Burger’ – and, more importantly, why?

The ABC “backing” of Mayne is outrageous! All the candidates should
get equal time on the ABC during the bye-election campaign – or
none of them should. I am fed up with these so-called experts being
given time on the ABC to push their own barrow.
Another case in point is Alan Kohler – we now get the obligatory
Ltd News view on just about everything on ABC news and business
programs. Just because he is supposed to be some kind of guru.
What’s wrong with some of the economic journalists onstaff getting
a gig? Steven Long, to name just one, is excellent.

Christ, CML. Some day you will be truly outraged and have no superlatives left. Stop crying wolf, it’s boring.

Mind you, after a few too many sessions with Amanda Vanstone and A Downer and Peter Reith I was just about to give it away.

Annabel Crabb is good, but.

CML is quite correct. SOMETIMES Alan K tries to sound impartial, but he long ago lost respect for impartiality over his very prominent anti-carbon/mining tax stance, where he and any of his panelists consumed by outrage would take turns defending mining and slagging off the government, and AK himself would habitually lead interviewees to say something/anything negative regarding either tax. I wish he would remember his program is there to impartially inform US, the viewers, not to push ideological viewpoints or actively promote business.
As for Mayne – I really wish he wouldn’t go into politics – not just because I don’t share his political viewpoint, but he is often the only media person really telling it like it is and cutting through industry BS that AK et al fail to do – hence the media seeking his viewpoint on Gunns, DJ’s & GR/Fairfax. If standing for public office he should have the same air time as every other candidate to promote his cause – no more, no less.