In today's Media Briefs:Oz elites discover public's commonsense ... Front Page of the Day ... For AP, the Olympics is gold ... Reuters and Next Media Animation join forces and more ...

Oz elites discover public’s commonsense. What a curious newspaper The Australian is turning itself into. If there isn’t a genuine front-page news story around that suits its agenda, it dresses up something to its liking as an “exclusive” and make it the above-the-fold lead. On Wednesday it was the hackneyed musings of Don Argus; on Thursday it headlined the thoughts of Warren Mundine.

To give these fantasy front pages a patina of substance, The Oz usually backs them up with breakout comment and/or a supporting editorial. It’s an old trick not confined to News Limited papers, but it undermines its current posturing about the sanctity of a free press and the evils of government-backed media regulation.

In that context, it’s interesting to note a distinct tactical shift in The Oz‘s campaign. Previously, it argued against proposals for new media legislation from the lofty moral ramparts of free speech as a democratic right. Now, it’s shifted ground to a claim that any form of print media regulation would be an insult to the commonsense of the public and its capacity to sift truth from bias. That position is usually paraphrased along the lines of “readers are smart and would soon see through it and make up their own minds”.

This week Janet Albrechtsen and Michael Sexton had opinion pieces in The Oz pushing that theme. Ita Buttrose voiced a parallel “public commonsense” view on Monday. An editorial today congratulated them on their wonderful insights (while taking an obligatory whack at Matthew Ricketson, Margaret Simons and the ABC on the way through).

The “public are smart” line certainly appeals to our democratic ideals and egalitarian instincts, but it’s a con. Indeed, there’s a nasty streak of elitism underlying that position. The implication is that any action motivated by a desire to protect people from institutional power carries an unspoken judgment by its proposers that the common folk are just too dumb to act on their own behalf. Big Brother is coming!

But when The Oz refers to “the public”  it doesn’t mean the general public at all, but the small demographic cohort who read quality newspapers and think seriously about social issues. That’s a tiny proportion of the nation’s adult population, as the modest paid circulation of The Oz itself confirms.

The overwhelming bulk of the media-consuming public (whose commonsense The Oz says it so admires) don’t buy newspapers. They watch free-to-air commercial television and listen to local radio. And judging by the most popular programming on those outlets, there’s not much subject matter on which the audience could exercise its “free speech” discernment.

Each weekday, for every person who buys a copy of The Oz, roughly 20 will watch A Current Affair or Today Tonight. They wouldn’t be the least bit troubled by a News Media Council or public interest test, but it seems the elitists at The Oz are only too happy to speak for them. — David Salter

Media family snap of the day. We loved this photo in the Australian Financial Review today of News Corp boss Rupert Murdoch and son Lachlan attending the Sun Valley conference in Idaho, USA. Their attire matched the laid back atmosphere of this annual meeting of fellow media and technological moguls with Rupert sporting a pair of chino shorts and a t-shirt whilst Lachlan was proudly displaying his tribal tattoo. 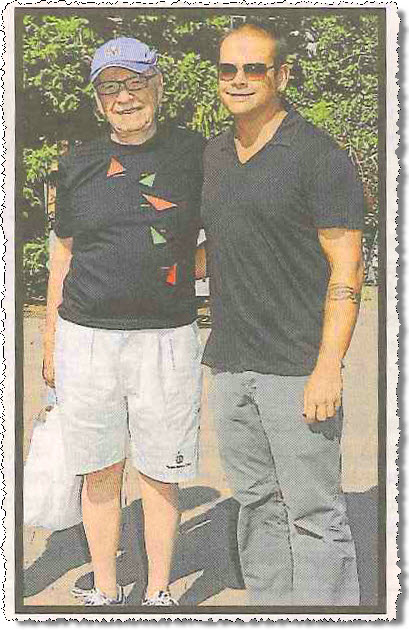 Front page of the day. As Spain descends closer to experiencing the same fate as its European neighbour Greece, its miners marched on Madrid yesterday in protest and clashes with police ensued: 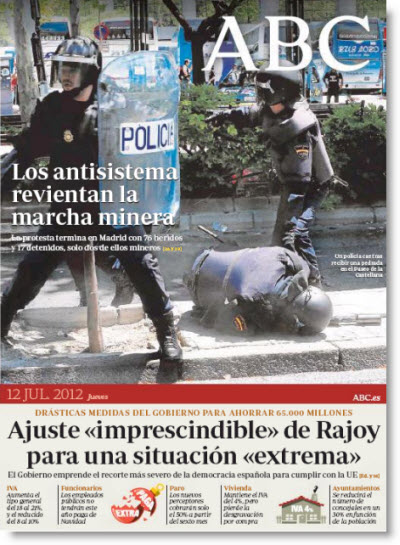 For AP, the Olympics is gold

“The Associated Press announced its 2012 Olympics coverage plan Thursday, and as you might expect it’s expansive: text packages and updates posted throughout the day, medal counts on its AP Mobile apps, interactive presentations viewable on a number of devices, and tons of photos and video.” — Poynter

“Digg Inc, a social-media pioneer once valued at more than $160 million, is selling for the deeply discounted price of about $500,000, three people familiar with the matter said.” — The Wall Street Journal

“The Sudanese ambassador to Cairo Kamal Hassan Ali announced on Thursday that Egyptian journalist Shaimaa Adel, who has been detained in Khartoum for 11 days now, after being arrested while covering the anti-regime protests, will be released and deported to Cairo by next Monday.” — Al- Ahram