ABC apology over detention story not all it seems

Federal Department of Immigration spin doctor Sandi Logan has forced ABC management to issue a grovelling apology over a controversial story on changes to an asylum seeker "points" system.

Federal Department of Immigration spin doctor Sandi Logan forced ABC management to issue a grovelling apology over a controversial story on changes to an asylum seeker “points” system. But the gaffe isn’t black and white.

On Saturday night, ABC Darwin correspondent Jane Bardon reported that in some NT detention centres, a Serco points program — which previously allocated 50 “points” per month to detainees to “pay” for consumer items including cigarettes, snacks and phone calls — had changed.

Now, detainees’ base points would be reduced from 50 to 25 — but the extra 25 points could be re-earned through participation in certain “activities”, including English language training, sports activity and education forums.

Bardon reported that some detainees weren’t happy with the shift in policy:

“In a move to reduce self harm in detention, the federal government has spent millions building facilities to keep detainees busy. While they welcome the resources asylum seekers say they don’t like a new point-scoring system that effectively forces them to participate in activities.” 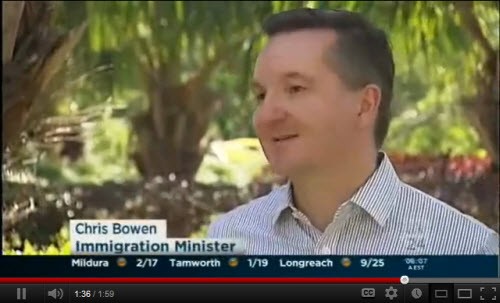 But on Twitter on Wednesday night, the combative Logan said the story was “plain wrong”. He said Bardon had not checked her story with the department, despite it containing a grab from Immigration Minister Chris Bowen. The truth of the matter is somewhat murkier.

The so-called “individual allowance program” —  in place since Serco gained the DIAC contract in 2009 — is meant to give detainees the freedom to purchase discretionary items. It is designed to influence behaviour but also to meet Serco‘s contractual obligations to provide “meaningful engagement”. A scaled-down version applies to under-age detainees and it is communicated to “clients” through somewhat infantilising letters like this one: 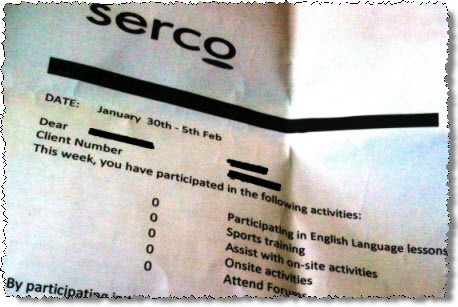 But in some centres, such as Darwin’s, managers have the power to distribute the full 50 points carte blanche if, for example, the health profile of detainees at various centres is worse than usual or teaching facilities aren’t available — such as after the Villawood fires last year that destroyed classrooms.

On Wednesday night, in the multiple TV markets in which the story first aired, this “correction” ran prominently:

“Now a correction in relation to a story we ran on ABC last Saturday about points and immigration detention. The story claimed that new rules effectively force detainees to do activities and earn points which enable them to buy products like phone cards to call home and sweets.”

It is true the new rules don’t compel detainees to do anything. The key word is “effectively” — that is, doing nothing last month compared with doing nothing this month means 25 less points. It continued:

“The ABC accepts that the rules are not new and have not been toughened.”

Again, while the overall points remains the same, it might be reasonably assumed that 50 “free” points versus 25 free and 25 earned points might indeed amount to a “toughening”. It ended thusly:

“Further the ABC accepts that participation in the activities are not compulsory. Detainees do not lose points if they do not participate. The Department also states that basic toiletries are provided free to all detainees and that detainees can participate in any recreational activities they want to join.” 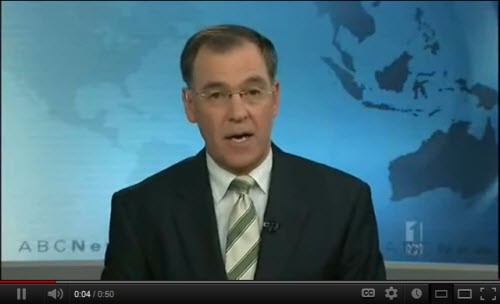 It is true that after the recent changes Darwin detainees are not stripped of points for not participating. But a reticence to complete them would still mean they were 25 points worse off than before the change. Essential toiletries are provided gratis but points can be used to purchase more lavish items.

Logan told Crikey that Bardon‘s claims that the policy was “new” were wrong and that toiletries were complimentary. He said the suggestion “new facilities” had been built across the network to compel detainees to earn points was false. When asked what had occurred in Darwin to prompt the policy, Logan said a previous Darwin cohort with a deleterious health profile had been moved into new facilities.

But two sets of Serco “client consultation” meeting minutes from late June — obtained by Crikey — appear to contradict the ABC’s apology. Both refer to “new rules”.According to one:

“Natalie explained the old system and the new IAP system to clients. Clients can still get 50 points. The reason for this points system, is to prepare clients for life in Australia. They need to go to ESL to learn English and go to the gym, for their well-being and attend classes ‘About Australia’, to prepare them for life in the community. This has not been introduced to punish clients.”

A similar meeting at the main Northern Immigration Detention Centre a week later also refers to the “new system”:

Logan said the minutes had been compiled in error by a “junior staffer” and would be corrected.

The Darwin centres were not the only Serco site to employ the 50 point system. According to this memo obtained by Crikey, Villawood was “very close” to transitioning away from the lump sum following the completion of new buildings after last year’s fire. On Twitter, Logan confirmed that activities at Villawood were now available and the allocation had changed. “VIDC’s [Villawood] rec/classrooms burned down Apr ’11. Re-opened June ’12. Activities now avail. Points now earned,” he wrote.

Amid the rancour lies one main insight — there is little doubt some NT detainees are aggrieved by the change. Bardon aired a phone call from one objector. And a raw email from inside a detention centre, obtained by Crikey, expresses supreme displeasure, pointing out that while short-term detainees are happy to complete the activities, others were not satisfied:

“Serco said it was instruction and the rest 25 points will be added base on partication  in activities. So, doing each activity can be earned 1 to 4 points and that will be added to normal 25 points.

“But it doesn’t means doing many activities can be earned more than 50 points becasue maximum earning is 50 points only … but those spent more than a year and more are mostly unwilling to do activities because of stress, unstable condition and most of the times spent in sleeping.”

Those too unwell to complete the activities are effectively discriminated against, the detainee says:

“Unnoticeably, they also miss launch and dinner. So, they don’t bother with whatever rule changes in the centre but they face difficulties of insufficient to buy phone card and cigarettes.”

Those forgone 25 points could be put to used to buy phone calls to Burma and the Middle East — calls to Burma come in at a prohibitive $1 per minute.

Refugee activist Pamela Curr told Crikey detainees were “being treated like children”. “The reason why people go mad in detention is that they are under constant surveillance, are checked constantly in the middle of the night and on top of that they’re supposed to engage ‘meaningfully’ for the delight and pleasure of Serco staff and the department,” she said.

The latest backdown marks the second time the ABC has issued an apology on the asylum-seeker issue. Last month, Aunty broadcast a mea culpa to shadow immigration minister Scott Morrison after finance correspondent Stephen Long accused him of playing the race card to drum up fear and loathing in the electorate.

Serco did not return a request for comment. Jane Bardon referred queries to her boss, Darwin news chief Murray McLaughlin. McLaughlin declined to weigh in.

Of course the fact that the detention system is illegal is always ignored.

Its all too disgusting!
Compassion?
Empathy?
Sympathy?

The story was inaccurate in key respects.
That was acknowledged by the ABC openly and promptly once we became aware of the inaccuracies.
That’s what any media organisation that understands and values accuracy does.

Yes Alan, although the correction was also inaccurate in key respects.

Why wouldn’t detainees want to learn English, do some exercise, etc? It is not as though they are flat out working to put a roof over their heads and provide for three meals a day like the rest of us.
This article is pathetic – storm in a teacup territory!