What’s with the Canberra Times’ Gillard toon? Eagle-eyed Crikey reader Marcus pointed us towards yesterday’s Canberra Times column by editor-at-large Jack Waterford — and more specifically its accompanying cartoon by Matt Adams. Perhaps we’re a little childish, perhaps we’re seeing something that’s not there, but is there something not quite right about the shape of the broccoli that Gillard is depicted as about to eat? 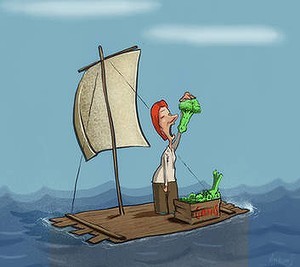 “The colour artwork was used to illustrate a rather odd piece by Waterford about — I think — the Labor Party starting to ‘eat’ the cabin boys of the Greens, as the ALP ship sinks in a sea of woes,” wrote Marcus. “Did no-one at the Crimes take a closer look at the, ahhh, shape of that, uhhm, particular piece of the cabin boy being eaten by the Prime Minister? A close look?”

Front page of the day. Sydney may be seething but Cairns is cock-a-hoop about attaching its coat tails to Brisbane’s hosting of the 2014 G20: 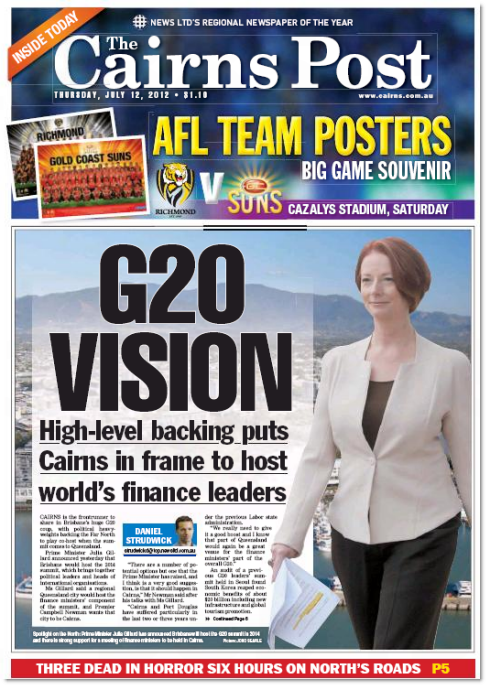 “Rupert Murdoch has hit out at allegations by former Sunday Times editor Andrew Neil that he had successfully lobbied Tony Blair for changes in media laws ending the ban on foreign ownership of TV licences.” — The Guardian

“William and Kate are said to be feeling upset and betrayed today after beach photographs of their honeymoon were published in an Australian magazine, a full fifteen months after their wedding took place.” — The Daily Beast

“Would you pay to read your local newspaper online? An increasing number of Norwegian locals are gambling the answer to that question is yes.” — journalism.co.uk

The US has kidnapped journos and murdered them with complere immunity.

That cartoon of Adams’ – it will be interesting to see how the rest of the media treats it after the way they took to a “rube” like Sandilands when he did a number on a female Murdoch journalist?