Peter Jolly writes: Re. “‘A tough time to be a public servant’: the 38k forgotten jobless” (Tuesday, item 1). Your article prompted me to go to the tape so to speak. Rather than quoting thousands of job numbers being gained or lost, it’s probably better to view public sector employment as a share of the total economies or populations size. Presumably, the number of folk employed in the public sector should grow roughly in line with the economy or the number of people they are helping.

So we should compare the number of people employed in the public sector against a broader denominator.

I’ve used the quarterly Australian Bureau of Statistics industry employment data where they break the “Public Administration and Safety” category into three sub components — see below for a chart showing the “public administration” subcategory (this includes Commonwealth, state and local employment). 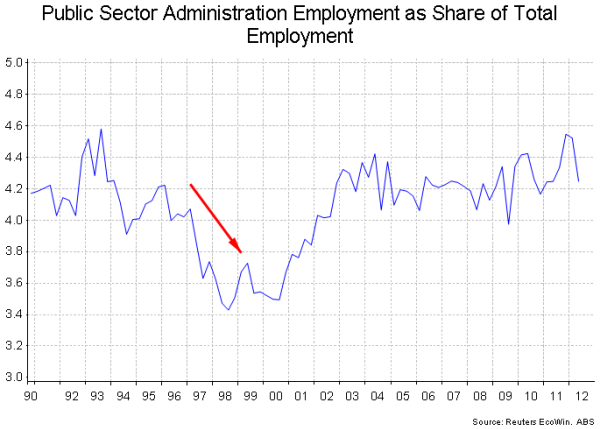 A couple of points to make:

Keith Thomas writes: Re. “A new political movement in Timor: ‘even if we lose we win’” (yesterday, item 10). This article continues Crikey‘s misguided focus on Timor Leste at the expense of Papua New Guinea. Timor Leste is 100 times further away from Australia than Papua New Guinea; it has a population about half the size of Perth while Papua New Guinea’s population is similar to Libya’s, Jordan’s, NSW’s or Bulgaria’s.

Why do you persist in this neglect? Is it because affection for Timor Leste is a surrogate for criticizing Indonesia? Is it because Timor Leste’s politics can be understood using the conventional categories of the Left and anti-colonialism? Is it because the Timorese are more photogenic by our standards?

Whatever it is, please bite off a tough one, Crikey, and keep us far better informed of events, issues, developments and trends in Papua New Guinea — at least ten times the word count as those you devote to Timor Leste. It is tough, but it’s vital.