In today's Media Briefs: Bolt ain't got no comments ... Nothing sweeter for a sub than a pun headline ... SMH Readers' Editor says things will get worse before getting better ... NotW threatened woman over 2008 Max Mosely story and more ...

Bolt’s blog a comment-free zone. The comments section of Andrew Bolt’s blog used to be a sight to behold – a free-wheeling, invective-filled wonderland of debate and discussion. Now, it’s a wasteland.

“NO MORE COMMENTS TODAY, PLEASE – OTHER THAN FOR THE THREAD ON OURSAY,” Bolt implored his readers yesterday. “NO MODERATORS AVAILABLE.”

He also, we recall, asked readers to let News Limited’s powers-that-be know if they wanted the situation fixed (his post has since been amended).

The Herald Sun, it appears, is no longer willing to fork out the cash necessary to stop Bolt’s blog from becoming a defamation danger zone. The columnist used to do much of the moderating himself, with assistance from wife Sally Morrell. Last year, Anne Summers detailed how Annabel Crabb and David Marr were subject to sexually-explicit slurs by Bolt commenters after appearing with him on the ABC’s Insiders.

In response to questions from Crikey this morning, The Herald Sun’s editor-in-chief Phil Gardner gave us this cryptic answer: “Moderating procedures across heraldsun.com.au are continually being reviewed.”

Nothing sweeter than a pun headline. The news yesterday that Australian chocolate company Darrell Lea has been placed into administration was terrible news for the 700 people whose jobs are now in jeopardy but for the nation’s newspaper subeditors it was a chance to shine, which, sadly, they failed at: 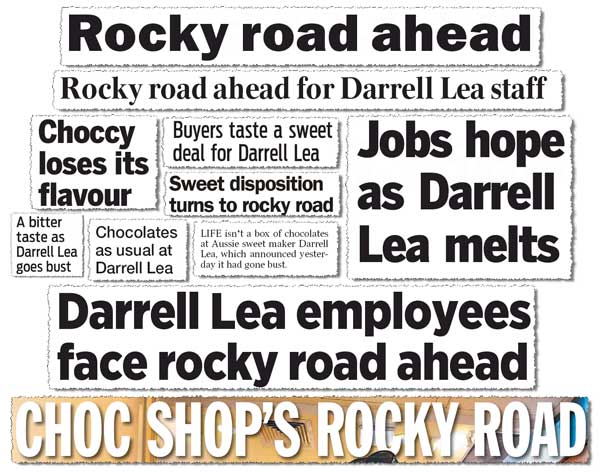 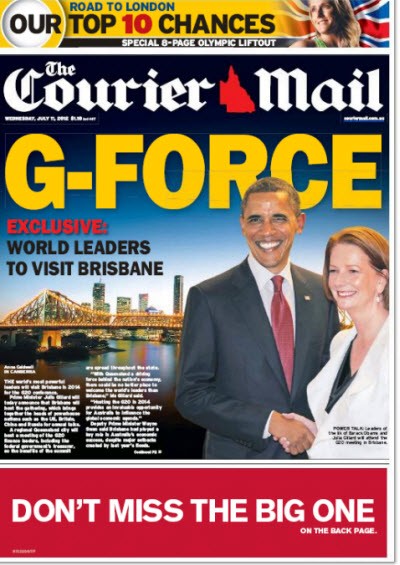 The Department of Corrections. We’re sure the Governor-General’s office enjoyed this correction in today’s Australian:

SMH readers’ editor: things will get worse before getting better

“Editorial standards in the Sydney Morning Herald will get worse before they get better, the newspaper’s Readers’ Editor has warned in a column today. And the paper’s reporters need to buy themselves a book on grammar and to study up on spelling, Judy Prisk added.” — mUmBRELLA

“As the Huffington Post prepares for an Aug. 13 launch of its full-day online video network, it is hoping to tap a fast-growing advertising market by offering marketers something akin to sports naming rights in addition to traditional online video ads.” — The Wall Street Journal

“NPR has deleted a story from its website, an intern’s first-person account of witnessing a public execution in Kabul, after learning that parts of it were plagiarized from someone else’s story published in 2001.” — Poynter

The story of the first photo on the internet

“The first photographic image ever uploaded to the Web was a Photoshop disaster. It was created to sell something, and featured attractive women in a come-hither pose. In short, photo-uploading was born with some original sins that have never quite washed away.” — Motherboard

I am not sure of Crikey’s obsession with Bolt: are Crikey’s authors threatened by Bolt? I’m confused? Are you all happy to see him go under? Can someone please explain to me the purpose of this pointless article, and all the others that focus on Bolt?

To answer IC-1101’s questions for Crikey:
1. No
2. Clearly
3. Probably
4. Bolt has claimed to be the most influential columnist in the country. The combination of the effect of the paywall and the staff cuts at News Ltd on comments on his log, probably make this turn of events newsworthy. Things of lesser import are deemed so by others

Personally, I’d like to see Bolt (from his influential, privileged, protected position in a Conservative “views-service”) “balanced” (as in “PCPs”) in the way he covers “news”, rather than use his position to nurture and pander to prejudice, partisan politics – and even ignorance.
With the manifestations of intolerance that perpetrates?

I’m “happy to see (Bolt) go under”. One should indulge one’s simple, harmless pleasures, life is too short.