Opposition leader Tony Abbott’s sound bites on the two biggest political issues of recent times continue to gain traction; his denigration of the “great big tax” on carbon that will “go up and up and up”, and his policy to “turn back the boats” have led some commentators (former defence force chiefs the latest) to question whether the detail of his slogans stand up to scrutiny. A Newspoll on asylum seekers today found voters were disillusioned with both sides of politics on the issue.

Labor knows it must win marginal hearts and minds to stand a chance at next year’s election, hence the kerfuffle on preferencing between Labor and The Greens that put Greens leader Christine Milne in the spotlight, as Labor seeks to stop the cannibalising of its votes from the left and show that despite holding similar values it is a party that wants to govern as opposed to a purist party that wants to hold it to account.

Hearts and minds took the government to Queensland where Campbell Newman and the PM actually agreed on something: Brisbane would be happy to host the G20 in 2014, as announced by Gillard following a mixed response to her Community Cabinet in the battleground of Ipswich last night. The Queensland premier garnered many a headline this week over his challenge to the mining tax and the purge in public sector jobs. 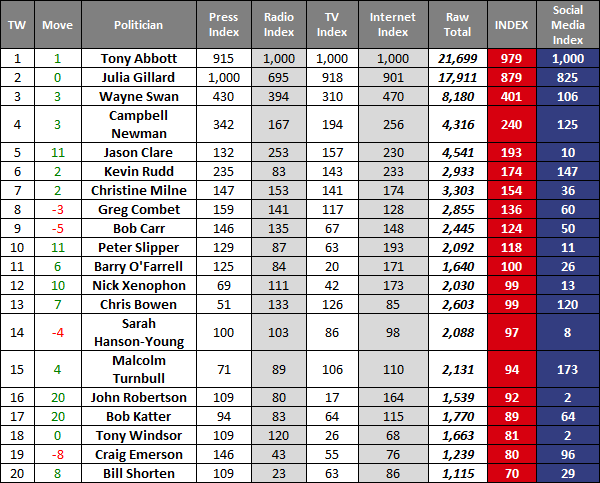 K-Rudd , never far from the social media water cooler, may come again if he is called.

The Fed Express is back on top to a volley of good cheer, just in time for the Olympics. Talk about aging gracefully.

Missed the vital point. Another “fluff” opinion poll based article!
The issue:
At present the ALP (Alternative Liberal Party) supported by the Greens and the Independents have workable policies, the LNP does not.
Changing current party leaders does NOT change this fact.
Re-installing (mea culpa) Rudd and (fake email) Turnbull will NOT change the fundamentals.
Politics is not a beauty contest. It is about policies NOT personalities.
The MSM doesn’t get it. They have been manipulating public opinion for too long. A public interest test needs to be implemented. See also this article: independentaustralia.net/2012/philosophy/democracy/media-bosses-must-stop-meddling-in-our-democracy/

Tony Abbott is simply a joke, his in the media 24/7 yet he doesn’t outline any policy in detail. I reckon he knows his policies won’t work (e.g. the idea of turning back the boats), and his just delaying their announcement so that the voters don’t have time to scrutinse them.