From the Crikey grapevine, the latest tips and rumours … Melbourne by-election throws up scenarios. The battle for the state seat of Melbourne has jacked up a notch after a candidates forum in Carlton last night. Greens candidate Cathy Oke, who is involved is face off with Labor’s Jennifer Kanis, was asked directly whether she would […]

Melbourne by-election throws up scenarios. The battle for the state seat of Melbourne has jacked up a notch after a candidates forum in Carlton last night. Greens candidate Cathy Oke, who is involved is face off with Labor’s Jennifer Kanis, was asked directly whether she would bring on an early election or prop up the Baillieu government in return for their support for her agenda if she won Melbourne and the Libs lost a seat like Frankston. Oke refused to answer the question on the basis it was a hypothetical and, in effect, refused to rule out propping up the Baillieu government.

The situation could well arise in which beleaguered Frankston MP Geoff Shaw resigns, triggering a byelection that Labor might win. Under that 44-43-1 Legislative Assembly scenario, Oke could either become speaker (unlikely), use her balance of power to extract concessions from Baillieu, or refuse confidence and supply, triggering a fresh election. “It makes no sense for a minor party or independent to bring on an early election when they have all the power in a hung parliament,” Crikey‘s source said. “So she would almost certainly take the second option and prop up Baillieu until November 2014, or until she’s got enough out of him to feel confident of defending her seat.”

Of course, a lower house Green could prove temporary anyway. The re-insertion of a Liberal candidate into the 2014 race would help return the seat safely to Labor hands.

Remember Greens’ open ticket in 2010? Amid the stoush over Labor placing the Family First ahead of the Greens in Melbourne, it’s worth recalling the 33 seats at the 2010 Victorian state election which the Greens recommended an open ticket, effectively letting voters place Family First or the Liberals ahead of Labor … 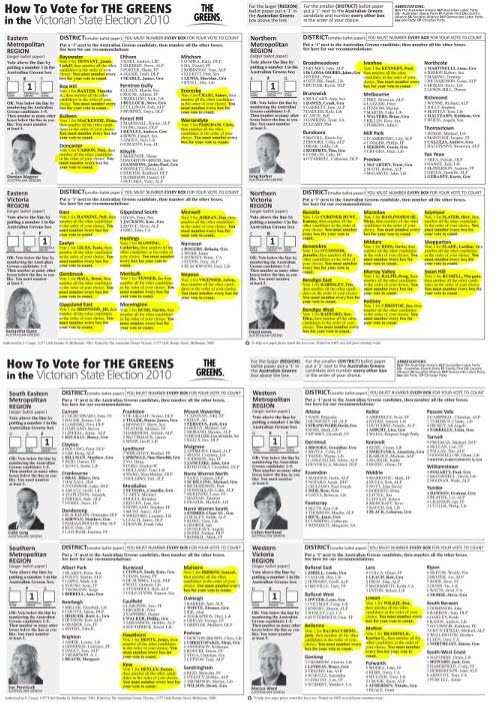 That, of course, was part of Greg Barber’s failed strategy for securing Liberal preferences in the inner city — something the party acknowledged at the time.

Qld razor watch: more departmental cuts. More news from the razor gang as it slices through the Queensland public service. We’re told staff in the Office of Clean Energy have all received “r or r” letters — redeployment or redundancy. “The new redeployment directive gazetted on Monday means you have one shot at redundancy or four months to find another job,” says our mole. “There aren’t many vacancies — we had to put up business cases to the DG to fill empty positions and most were knocked back. The empty positions where abolished just before the end of the financial year.”

At the Department of Environment and Resource Management in Brisbane, a team of 17 has apparently been reduced to six. According to our source: “One of the six remaining has retained her position — at two levels lower pay grade!” They also report: “In the Department of Local Government and Planning in Cairns, the teams working on infrastructure projects around Cape York Indigenous communities have all been sacked as temporary staff — even though some had contracts until June 2013 and had planned superannuation and car leases around that date.”

Our spies are hearing “dozens of similar stories every day”. What have you heard? Drop us a line or use the anonymous form.

Qld razor watch: disability support cuts? Meanwhile, is support group Queensland Parents for People with a Disability the latest victim of Newman’s axe? We’re told the group has lost its government funding, but we hadn’t heard back from a spokesperson at deadline. We’ll let you know …

Rail safety probed by the wrong researchers? Still in Queensland, there are questions today around a study into rail safety. According to our source:

“Queensland rail workers are currently in an uproar over staff cuts (even if they might be aimed at the top) and QR is in the news today over safety management. Meanwhile, QUT (as a partner in the Rail Co-operative Research Center) has awarded itself over $1 million in research funds on the issue of safety (e.g. rail crossings). Research is good, of course, but the grant winners had no previous experience in this sector (stunning enough), and there have been no traditional ‘peer-reviewed’ scientific outcomes (i.e. no meaningful contribution to public safety). There are real issues around governance and accountability.”

BHP office policy: cover the windows. At least one person is quite happy with BHP’s hard-line desk beverage policy for its new Perth HQ, as we discussed yesterday. Writes one disturbed Crikey reader:

“I’m quite happy for management to be discouraging the intake of liquid given that I can see directly into the men’s urinals of the new BHP building from my desk in a building across the other side of St Georges Terrace.  Perhaps a better use of the memos would be to print them out and cover up the clear glass that they decided to use for bathroom windows (it seems they could afford tinting for every window except those on the bathrooms).”

Meanwhile, Perth staff of the Big Australia should be glad they don’t work on the east coast. According to one operative:

“A friend works at their offices in Sydney and I don’t believe they have any microwave for heating food and they aren’t allowed to leave food in the fridge overnight. These policies are the direct instructions of the CEO, who has clearly never played well with others. When you walk in, you think you’re on an uninhabited floor because it is so eerie and empty. You couldn’t pay me enough money to work there.”

Security cutback at London embassy? A relative of a staffer at the Australian embassy in London is concerned about security around Australia House after what they say have been cutbacks in security guards. “Due to local overspending I am led to believe that the numbers of security guards have been reduced,” they write. “This is a concern to the staff there and I am worried about a family member who is on a posting there especially with the danger of the forthcoming Olympics.” We put in a call to the embassy this morning but it had closed for the day. We’ll let you know if we get a response.

How do people who vote Green take being told “how to vote” and
“how to allocate” their follow-on preferences?

OMG, someone refused to rule something out … I subscirbe to Crikey for this top shelf spade work

“it’s worth recalling the 33 seats at the 2010 Victorian state election which the Greens recommended an open ticket, effectively letting voters place Family First or the Liberals ahead of Labor …”

Huh? Does the person who wrote this think that Greens voters need a permission slip from Bob Brown in order to direct their preferences according to their, um, preference? How to Vote cards are meant to be guides to be followed or ignored at the whim of the elector.

I find the whole spectacle of preference trading by political parties pathetic and would gladly give my first preference to any candidate who would clean the whole sham up, especially for the Senate where the current system of above the line voting and preference trading is effectively undemocratic. Anyone willing to follow the lead of Tasmania and the ACT by banning people/pests from handing out HTV cards within 400m of a polling place would also be looking at top spot on my ballot paper. The parties can stick up their HTVs on the walls of the booth if they still want to do that.

So Crikey reckons leaving voting preferences open is somehow underhand because it is…”effectively letting voters place Family First or the Liberals ahead of Labor”. Wow, if you are going to run Labor lines you should at least get them to put better ones up than that. Gasp! People might (cue dramatic music) make up their own minds….the shame…
You could just as well say its effectively letting people do the opposite too, or in fact turn up in a top hat, tutu and flippers playing Alexanders ragtime band on the trombone…its about as logical.