Gillard upgrades to a star beau. Some suave work on page 5 of Mt Isa’s North West Star where the paper reported on PM-beau Tim Mathieson opening a new “men’s shed” named after a deceased local legend. Only one problem — attached is a lovely photo not of Mathieson, but of US-actor Tim Matheson. Yep that’d be the same Tim Matheson who played bitter Vice President John Hoynes on The West Wing. 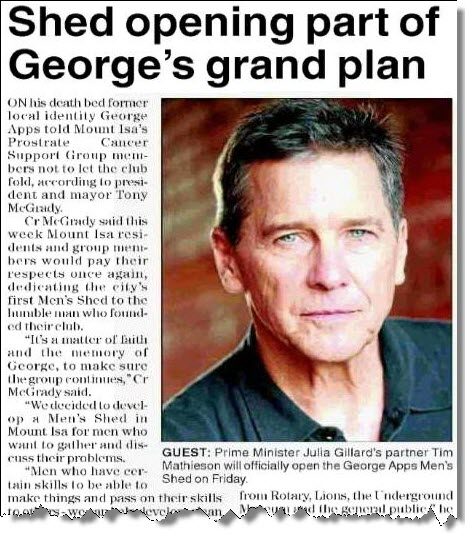 Front page of the day. Sweden’s Svenska Dagbladet led today with the war crimes trial of Bosnian Serb ex-military chief Ratko Mladić underway at the Hague in The Netherlands. 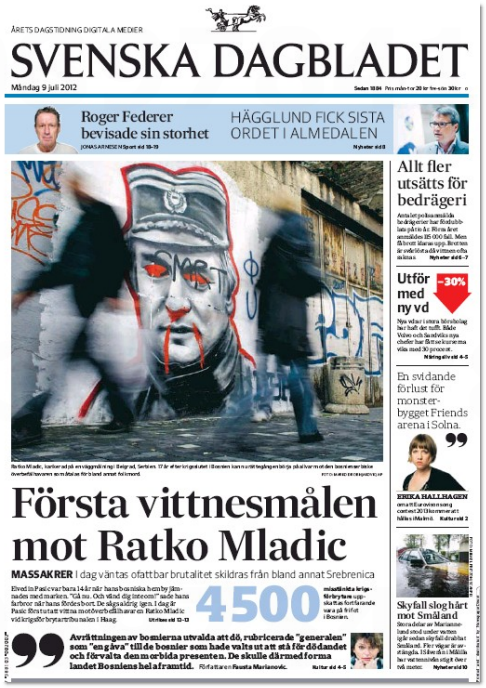 The Department of Corrections. Yesterday’s Ottawa Citizen liked its editorial cartoon on the Higgs boson discovery so much they ran it twice. Then apologised. 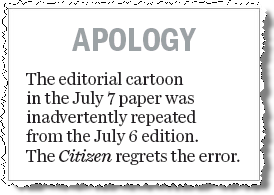 Gina Rinehart’s not a Simpsons fan

“It was in early 2011 and Australia’s richest person had only been a director of Ten Network Holdings for a month or so. After one board meeting she took it upon herself to explain to Murdoch that the long-running series was not suitable viewing for families.” — The Australian Financial Review

“After months of playing coy in the face of sustained rumours of a potential tilt at some of the nation’s largest media companies, Telstra has denied it is poised to make a large-scale acquisition in the media sector.” — The Australian

“A report published today has found that Facebook ‘is by far the most important way of sharing news, accounting for more than half the links’, followed by email and then Twitter.” — journalism.co.uk

“The United Nations says an alarming number of journalists around the world are killed every year and very few of the perpetrators are ever brought to justice. The U.N. Educational, Scientific and Cultural Organization has drafted a plan for the safety of journalists. ” — Voice of America

Does the NYT Book Review matter?

“The front page of the New York Times Book Review has always been — and continues to be — a much coveted spot for authors and publishers alike. But just how much does a Book Review cover affect a book’s sales in today’s publishing climate — does the revered paper publication still move units in the digital age?” — Publishers Weekly

Re “Journos need greater protection
“The United Nations says an alarming number of journalists around the world are killed every year and very few of the perpetrators are ever brought to justice. The U.N. Educational, Scientific and Cultural Organization has drafted a plan for the safety of journalists. ” — Voice of America”

Don’t understand why the perpatrator isn’t brought to justice.. Everybody knows where Murdoch is and he has done most to kill off journalism
Oops my mistake…It was about journalists not journalism.Sorry

So, will the editor of Mt Isa’s Northwest Star prostate himself on the floor of the Mens Shed?

I assume “prostate” was an intentional typo given that a Men’s Shed was involved.

If you very clever..Well I think so

Ah yes, Gina is such an expert on family values.

The Pav, shouldn’t have to explain this but if you read the text of the newspaper clipping contained within the article you will see: “Mt Isa’s Prostrate (sic) Cancer Support Group”. These words must surely have been written (ie. typed into the word processor) by a person overseen by the editor of the Northwest Star. Therefore……