Australians are a happy lot

At Melbourne University they have been measuring significant aspects of family household life for a decade now and the latest report on their findings suggests that Australians are basically a happy lot.

Basically happy Australians. At Melbourne University they have been measuring significant aspects of family household life for a decade now and the latest report on their findings suggests that Australians are basically a happy lot. Incomes are up and financial stress levels are down. The proportion of parents reporting high levels of parenting stress has decreased considerably too since 2001, from 29.6 per cent back then to 21.2 per cent in 2009.

The Household, Income and Labour Dynamics in Australia Survey (HILDA) is chock full of interesting information made possible by the surveyors regularly returning to the same households to update the responses so what follows is nothing more than a brief sampling. 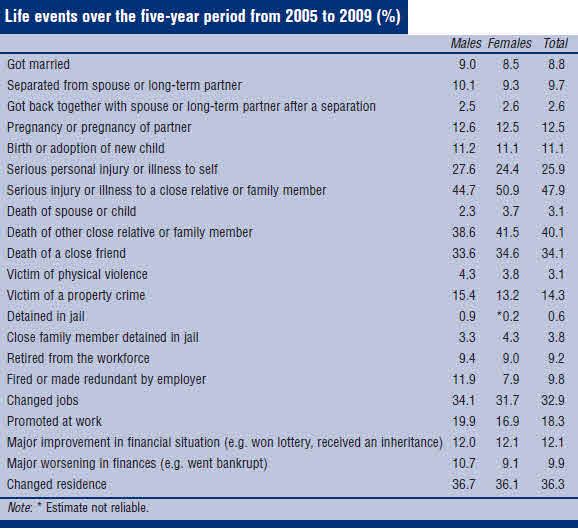 In looking at incomes the HILDA team estimates are for “disposable” income, total income from all sources, including government benefits, after deduction of income taxes and they show how average household incomes have grown quite strongly. Since 2002−03, with mean household annual disposable income expressed at December 2009 prices increasing by approximately $17,200 to 2008-09,or $2866 per year, and the median increasing by $16,100. This translates to a significant increase in average material living standards.

Significantly, average household income grew substantially between 2007-08 and 2008-09, despite the economic downturn that began in the later months of 2008. 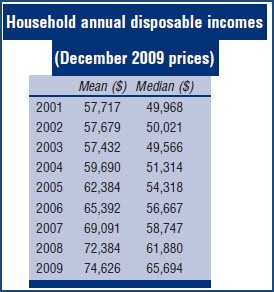 The survey also measures what it calls equalised income — a measure of material living standards, obtained by adjusting household disposable income for the household’s “needs”. The scale used recognises that larger households require more income, but it also recognises that there are economies of scale in “household production” (e.g. the rent on a two-bedroom flat is typically less than twice the rent on an otherwise comparable one-bedroom flat) and that children require less than adults. Each member of a household is assigned the same equivalised income, the implicit assumption being that all household income is pooled and then shared equally. 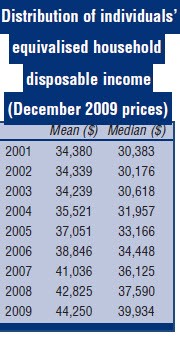 With such considerable increases in income it is no surprise that financial stress of Australians has declined over the decade. 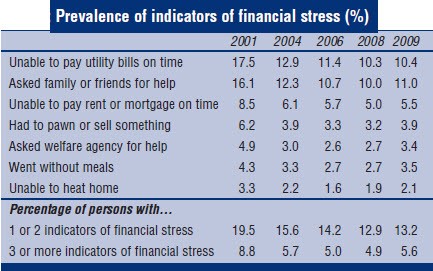 But not happy with the government. When you look through a study like this HILDA one it is hard to believe that such basically better-off Australians are telling another lot of opinion pollsters that they don’t think much of the government that is presiding over the good times. Yet that is what the Newspoll in The Australian is showing again this morning.

There’s got to be an explanation somewhere and I very much doubt that it has anything at all to do with the Greens that are the current scapegoats for Labor’s factional leaders.

Surely describing the Greens as loons just makes as mockery of the government’s claims to be, despite its minority status, an effective one. If Christine Milne and co really are such a threat to democracy how is it that Australia is doing so well? Aren’t the loons the ones who have allowed Labor to get the great bulk of its proposals through the Senate?

Ever closer to breaking point. In Germany overnight the rates for six-month money fell to a record low of minus 0.03pc as investors sought the safety of a country they believe in. In Spain the 10 year bond rate went through the 7% barrier again as fears grew stronger that a financial bail-out will soon be needed.

And the politicians of Europe just keep on talking with different messages. The London Daily Telegraph reports:

Spanish bonds have been pummelled on reports that Spain would have to bear the full cost of rescuing its banks rather than shifting the burden on to the ESM, as originally supposed.

Brussels sought to calm the waters yesterday, insisting that the EU summit deal had indeed cleared the way for a direct rescue of the banks, provided Spain created a “bad bank” and took steps to shut down crippled lenders.

“There will be no need for a sovereign guarantee. The very clear purpose is to break the vicious circle between banks and sovereigns,” said an EU spokesman.

Yet German finance minister Wolfgang Schauble told El Pais that the rescue package — up to €100bn — will be a loan to the Spanish state.

He said there will be no direct aid to banks until a new supervisory body is in place under the control of the ECB, which will not be ready this year. “It will take time. Everyone knows that the set-up of a European bank supervisor isn’t a trivial matter”.

Aussie household incomes take another hit despite the boom

Still healthy, wealthy and wise — but dropping in productivity