There are four factors to take out of Sam Dastyari's extraordinary intervention on the front page of The Weekend Australian.

There are four factors to take out of Sam Dastyari’s extraordinary intervention on the front page of The Weekend Australian. 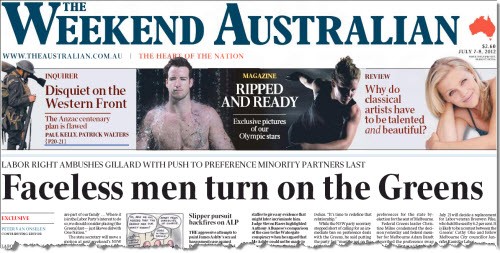 First, the sharp-dressing NSW general secretary was keen to cleave some oxygen back from the broader NSW Right before this Saturday’s state conference. His faction had smacked down a proposal for direct election of the parliamentary leader — also backed by the Left — and Dastyari wanted to shift the agenda.

Second is the rather dubious view that persists inside the NSW and Victorian ALP Rights that centre-right “independent” senators are more “flexible” to negotiate with. As Antony Green has pointed out, the Greens preference strategy is only relevant in extremely close seats where they decide run an open ticket, but Greens senators could fall if Labor put them last. On this view, a carbon tax-opposing senator such as John Madigan, or even Steve Fielding reincarnate, is a preferable outcome to another Green.

Third is a corrective to the narrative, popular in voter land, that the PM is being held to ransom by the Greens in a structural sense on issues such as the carbon tax (think “Bob Brown’s Bitch”).

Fourth, and most intriguing of all, is the leadership dynamic — the attack on the government’s main coalition partner by the party’s most powerful faction as a prelude to the return of Kevin Rudd (with Bill Shorten as deputy and Therese Rein’s blessing).

The most dubious of these is the policy argument — in off-the-record briefings the NSW Left has been keen to emphasise that the attack on the Greens should take a “more nuanced” approach. The reason is that in Left-held seats, the “loopy Greens” attack strategy is likely to backfire — the problem there is not the Greens, but modern Labor’s policy approach.

In the aftermath of 2010, according to Auspoll, 32% of Greens voters nationally said they would have voted Labor if it wasn’t for Julia Gillard’s decision to delay the introduction of a CPRS.

In electorates right across the country, but particularly in inner-city electorates like Grayndler and Melbourne (and Denison, where the bounce was split with Andrew Wilkie) Labor voters who had stuck with the ALP through thick and thin walked away, and the Green vote surged accordingly.

Right now in the Victorian state seat of Melbourne, the Left’s Jennifer Kanis is fighting a pitched battle with Cathy Oke, which Oke looks like winning. While Labor has placed the Greens below Family First on its how-to-votes, and Left opposition leader Daniel Andrews says the Greens “don’t live in the real world”, on policy it is unlikely to tack right.

Progressives in Left seats voted Green in 2010 because federal Labor dumped the CPRS, backed down on the mining tax and public funding of private schools, adopted rhetorical populism on asylum seekers and population growth, and refused to support same-s-x marriage rights. NSW Right ideas, all of them.

Not quite a gay marriage victory

If Greens/Labor stop preferencing each other the only people to benefit are the conservatives???

Yet another failed Gillard strategy. Go Therese bring back Kevin.

Apparently they all had trouble working with Kevin, Savonrepus….I guess they would, they’re from a different planet….

Bring back the Democrats.
They were true professionals who knew that politics is the art of compromise.

And Kevin Rudd would be a disaster–when the politics got tough he retreated to writing children’s books.
He didn’t have the guts to call a double dissolution
He ruined the Australian Wheat Board trying to implicate growers selling wheat to Iraq. Downer took no notice of his allegations.

Thank goodness we have a tough PM who is a superb negotiator but even she cannot negotiate with the Greens who are an impossibly inflexible mob.

If I were the Labor Right now would be the time to shut up about
the Greens. The Labor Right have led the party to the situation
where it is now sitting on 28 to 32% of the primary vote and very
reliant on coalition with whoever will talk to them to get anywhere
near government. Threatening the Greens with putting them last on
tickets is supposed to make the Greens in the Senate more ready to
compromise with Labor, in particular over issues like the Malaysia
non Solution. But it is more likely to get the Greens backs up and
to solidify Green voters into Green votes and ALP left voters into
Green votes. The ALP should be proud of what it has achieved
with the help of the Greens over the past couple of years.

Miss Gillard is toxic to the majority of voters.
It’s akin to having Satan in charge of Heaven.